Iran's Foreign Minister Hossein Amirabdollahian says his country does not accept "geopolitical changes" in the Caucasus. Tensions between Iran and neighboring Azerbaijan have been on the rise of late. 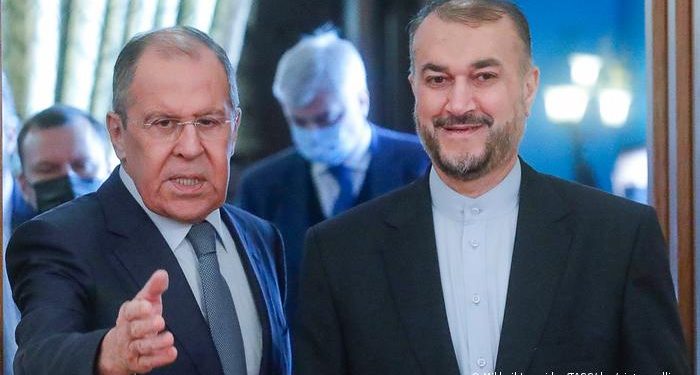 Iran’s Foreign Minister Hossein Amirabdohallahian criticized its neighbor Azerbaijan on Wednesday during a meeting with his Russian counterpart Sergey Lavrov in Moscow.

“We certainly will not tolerate geopolitical change and map change in the Caucasus, and we have serious concerns about the presence of terrorists and Zionists in this region,” he said.

Azerbaijan has also recently carried out military operations with Turkey following Iranian maneuvers last week. However, Amirabdollahian said that Iran’s operation had been a one-off event and had been announced beforehand through diplomatic channels.

“This maneuver was carried out inside Iran by the Iranian Armed Forces and its message was peace, friendship and security in the region,” Iranian news agency Mehr News reported him as saying.

Tensions between Iran and its northern neighbor have been on the rise. Azeris are the largest minority in Iran and antagonism from Baku could prove to be a thorn in Tehran’s side.

Azerbaijan is also a close ally of Turkey, Iran’s rival as a regional power. Baku has hinged a significant portion of its defense policy on Israeli technologies such as drones.

Azerbaijan relied heavily on these technologies in its war with Armenia last year when it successfully reclaimed the previously disputed territory of Nagorno-Karabakh, known to Armenians as Artsakh.

Baku was also a major logistics center over the two-decade-long war in Afghanistan. Additionally, the city has hosted talks between high-level military commanders from the US and Russia, especially under the previous Trump administration.

While in Moscow, Amirabdollahian and Lavrov discussed the prospects of reviving the international deal on Iran’s nuclear program, formally known as the Joint Comprehensive Plan of Action (JCPOA), with US Secretary of State Antony Blinken.

The Iranian foreign minister said he was now optimistic that the negotiations could proceed swiftly: “I emphasized that we are now finalizing consultations on this matter and will soon restore our negotiations in Vienna.”

However, Amirabdollahian also repeated a call for the US to unblock at least some foreign assets of the Iranian government which sanctions have targeted.

The previous administration in Washington in 2018 unilaterally walked out on the international deal first brokered in 2013, opting instead to apply what it termed “maximum pressure” on Tehran. Tehran responded by breaking some terms of the agreement  when it came to nuclear enrichment and inspection.

Fellow brokers China, France, Germany, Russia and the UK all hope the US will return to the deal but Iran is seeking improved terms while the US is yet to clearly signal its intent under President Joe Biden.