Officially, the visit of Finance Minister Avigdor Liberman to Azerbaijan focused on exporting wheat to Israel, but reports suggest that the minister also discussed strategic and energy issues. 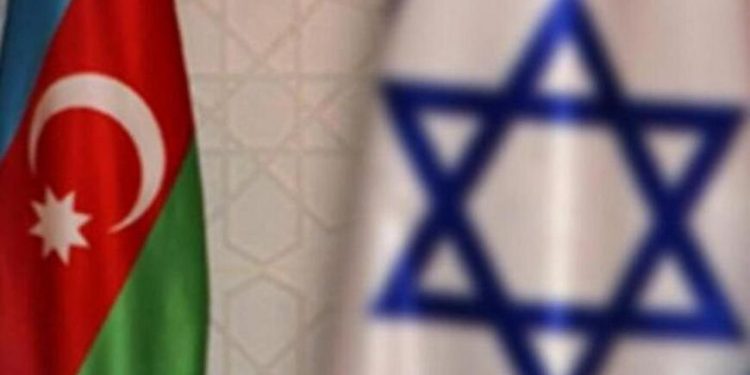 Finance Minister Avigdor Liberman’s visit to Azerbaijan April 22 was officially intended to discuss economic issues, especially the increased import of petroleum and other products to Israel. At the same time, however, it was also intended to strengthen the security relationship between the two states.

Azerbaijan lies on the northwest border of Iran, the country most hostile to Israel and its most dangerous enemy. But Israel is also the largest supplier of weapons to Azerbaijan. According to SIPRI (the Stockholm International Peace Research Institute), some 60% of Azerbaijan’s defense imports in 2015-2019 originated in Israel, while in 2020, that number jumped to almost 70%.

One main reason for this is large arms sales, mainly of gliders and drones before and during Azerbaijan’s war with Armenia in autumn 2020. These weapons played an important role in the Azeri victory. President Ilham Aliyev was photographed affectionately patting an Israeli Harop drone produced by Israel Aircraft Industries. It is considered one of the best unmanned aircraft of its kind in the world. This relationship between Israel and Azerbaijan dates back over a decade when the two nations signed an enormous arms deal valued at $1.4 billion.

Aliyev is fostering his country’s ties with Israel, much to the chagrin of the Iranian leadership in Tehran. In October 2021, after a mysterious fire broke out in an Islamic Revolutionary Guard Corps (IRGC) facility, Iran announced a major military exercise along the Azerbaijani border. The Azeris do not admit to any significant Israeli security presence in their country. On the other hand, they did announce that they uncovered an Iranian spy ring there. According to Israeli diplomatic sources, Liberman went to Baku to strengthen Israel’s defense ties with the country, in addition to the economic issues that were also discussed.

Why does Israel need Azerbaijan? For one thing, its proximity to Iran is a strategic asset. It could, for instance, be helpful in an Israeli assault on Iran’s nuclear facilities. Iran has yet to return to the nuclear agreement. It continues to enrich uranium and is making progress in developing a nuclear bomb. Israel has said on countless occasions that it would not allow Iran to obtain nuclear weapons and that it would take any steps necessary to prevent that. Statements like this have been made most recently by Prime Minister Naftali Bennett, Defense Minister Benny Gantz and Israel Defense Forces Chief of Staff Yair Kochavi.

Iran is reportedly concerned that the Azeris are already allowing Israel to initiate an attack against them, as evidenced by the fire in the 2021 IRGC facility. Accordingly, it has warned the Azeris about this. For its part, Israel would be happy to gain access to Azeri airfields and install listening and tracking devices in Azerbaijan in order to keep tabs on the Iranians and especially on Iran’s nuclear facilities. In 2012, Azerbaijan revealed that Iran and the Lebanese terrorist organization Hezbollah had attempted to assassinate the Israeli ambassador in Baku, Michael Lotem.

It is also important to recall that Iran threatens Israel indirectly through terrorist organizations along the Israeli border, including Hezbollah in Lebanon and Hamas and Islamic Jihad in Gaza. All these groups receive considerable aid from Iran, especially in the form of rockets and missiles that they can use against Israel. By taking position along Iran’s northern border, Israel is creating a more equitable balance between it and Iran.

What do the Azeris need from all this? First and foremost is a steady supply of advanced arms. This gives them a military advantage when dealing with their neighbors, particularly Armenia with whom they are engaged in a long conflict over the Nagorno-Karabakh region. They also receive defensive weaponry to counter threats from Iran. Furthermore, Aliyev needs diplomatic assistance in his dealings with the West, and particularly the United States, on all sorts of issues, most of them economic. For years, the United States has demanded that Aliyev institute democratic and economic reforms in his country. Aliyev has been president of Azerbaijan for almost two decades. It is a position he inherited from his father, the country’s first president. The country is entirely under his control, but it has come under criticism from the West during each election campaign. In all of them, he won a decisive majority.

While Liberman is officially finance minister, he also plays an important role in foreign affairs in the current government, especially in dealings with several countries in Eastern Europe that were once under the Soviet sphere of influence. He is also active in relations with Azerbaijan. He is considered one of the most powerful and independent-minded people in the Bennett government and is very involved in defense and foreign affairs, as well as being in charge of the country’s economy. He did, after all, serve as both foreign and defense minister under former Prime Minister Benjamin Netanyahu.

Liberman’s visit to Azerbaijan certainly had economic aspects as well. Joining the finance minister in his visit were Deputy for Budgetary Affairs Ilya Katz who is in charge of infrastructure, energy and agriculture, as well as a senior official from the office of the senior economist in the Finance Ministry. Among the issues discussed was the war between Russia and Ukraine. Azerbaijan is one of the biggest exporters of petroleum to Israel, and Israel is concerned that Europe’s efforts to free itself from its energy reliance on Russian oil and gas could come at the expense of oil imports to Israel. In his meetings with Aliyev and the Azeri ministers of finance and emergency affairs, Liberman reportedly discussed maintaining oil exports to Israel at the same levels as they were before the war. Furthermore, Israel also wants to import other petroleum products from Azerbaijan, including petroleum products such as diesel exhaust fluid (urea). Until now, Israel imported this exclusively from Russia.

Another issue under discussion was the export of wheat to Israel. At this stage, Azerbaijan does not grow enough wheat for export, but the country is planning an enormous project to expand its wheat production. Upon completion, Azerbaijan will not only grow enough wheat for use at home, but it will also have enough for export. To move this project forward, Israel will provide Azerbaijan with the latest agri-tech technologies to cultivate wheat, with the goal of purchasing wheat from Azerbaijan as early as 2025.

In two weeks, Israel’s Minister of Agriculture Oded Forer is scheduled to visit Azerbaijan with a group of Israeli experts in agriculture. While wheat will be the main focus of their visit, they will discuss other things as well. Israel is planning to develop and promote agriculture in Azerbaijan through all sorts of advanced technologies.