Karabakh, the key to the conflict between Armenia and Azerbaijan

Tensions continue between Azerbaijan and Armenia as a result of mutual accusations of border breaching, despite Russia’s deployment of peacekeeping forces in the wake of a 44-day war between the two countries. 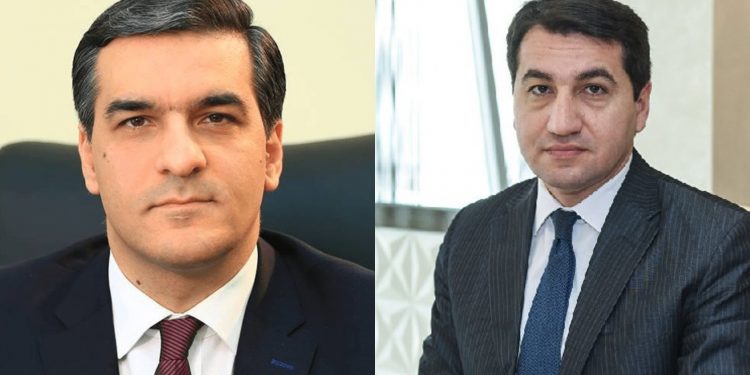 In light of the re-election of Armenian Prime Minister Nikol Pashinyan despite predictions that he would lose the elections because of the war, the Armenian people are waiting for what will happen next in light of demands to redemarcate the borders

Armenia had controlled the Nagorno-Karabakh region since 1994 within the Azerbaijani territories, but the recent war enabled Azerbaijan to regain the majority of its lands.

This caused outrage in Armenia. Protesters stormed the parliament building in the capital of Yerevan, assaulted the speaker of parliament and looted the contents of the office of the prime minister who called or forced early legislative elections.

Al-Masry Al-Youm conducted two interviews with the Assistant President of Azerbaijan Hikmat Hajiyev, and the President of the National Council for Human Rights in Armenia Arman Tatoyan to better understand the future of the two countries amidst this ongoing conflict.

Arman Tatoyan, President of Human Rights in Armenia: The people were traumatized by the war

Tatoyan explained that the government of his country, headed by Nikol Pashinyan, had adopted an incorrect policy and did not prepare society for the outcome of the war.

He contrasted it with Egypt, which he described as a large country with a long ancient history and civilization which cannot be denied. As a student, Tatoyan said he was familiar with laws in Egypt and how society benefited from them, and also praised Egypt’s role in containing the Armenian community.

“What I saw during my visit to Egypt is that the society is civilized, and this is not far from a pivotal country in the Middle East, and when I visited it, I was at the time an employee of the United Nations and my wife was with me,” he said.

He said it is difficult to discover Egypt in a short time, and if one spends their whole life there they will not be able to learn everything about it.

Regarding the war with Armenia, which lasted for 44 days from September 27 until last November 10, Tatoyan lamented that he has around 300 videos showing how badly insulted the dignity of the Aremenian people and nation have been, such as a footage published on Telegram channels showing Armenian soldier Ginayid Petrosian beheaded alive.

There was a defect in the disclosure and clarification of information and thus did not achieve its goals, he explained, nor did it prepare society for the war and its aftermath filled with acts of violence. Armenian society suffered a nasty shock, and investigations are still ongoing.

“Years ago in Karabakh, an Armenian farmer was unwittingly involved in desecrating a mosque when his sheep entered it without his knowledge or knowledge, and I confirm that there is a mosque in the city of Shushi that we restored from the state budget, so how can we not do humanitarian work for the Muslims to whom we have the utmost respect,” he said.

On the prosecution of Azerbaijan, he said the government took the initiative to address the United Nations agency for the eradication of racism to the European Court of Justice.

Tatoyan said the government asked us, as a National Council for Human Rights, to provide the information in our possession, in order to correspond with the relevant international bodies – and so a fact-finding committee was formed which discovered major violations.

The war between his country and Armenia was legitimate: Assistant to the President of the Republic of Azerbaijan, Hikmat Hajiyev

Hajiyev explained that the war between his country and Armenia was legitimate in order to recover occupied lands from about 30 years ago.

He stressed that the Armenians detained by his country are a group who entered the territory of Azerbaijan after the signing of the tripartite statement dated November 10, 2020, while a Lebanese citizen of Armenian origin has been accused of participating in the fight against Azerbaijani soldiers and civilians during the 44-day war in exchange for a financial reward as a mercenary.

Armenia launched a military aggression against his country, Hajiyev said, which led to the deaths and injuries of soldiers and civilians.

This attack caused serious damage to civilian facilities, he added, leading the Azerbaijani armed forces to act to ensure the security of the civilian population and restore our territorial integrity in full.

He also denied that his country has resorted exploiting “mercenaries”, slamming these reports as a “great lie” and slander against Azerbaijan.

Hajiyev assured that his nation’s armed forces have about 100,000 personnel with a very large reserve force equipped with modern weapons, while Azerbaijani youth have registered their names in the Mobilization and Recruitment Authority.

Whoever has real evidence about these allegations must present it, he said, and added that while these claims are just rumors his country has evidence of Armenia’s involvement in attracting militants.

“Our country has documented evidence and information that a large number of these mercenaries fought against our army, and we have pictures of mercenaries killed by the heroes of our armed forces during the fighting,” he explained.

Regarding his country’s relationship with Egypt, Hajiyev said that Azerbaijan attaches great importance to its relations and said that they are developing in various political, economic, commercial and cultural fields.

These ties have historical roots as well, such as in a famous visit made by national leader Heydar Aliyev to Cairo in 1994 to participate in the The United Nations International Conference for Population and Development, and in an official current President of the Republic Ilham Aliyev to Egypt in 2007.