Minister of Foreign Affairs and International Cooperation Prak Sokhonn made statements regarding responses to global challenges and Cambodia’s stance on multilateralism at the mid-term Ministerial Conference of the Non-Aligned Movement (NAM) held virtually on July 13-14 under the sponsorship of the Republic of Azerbaijan’s Baku city. 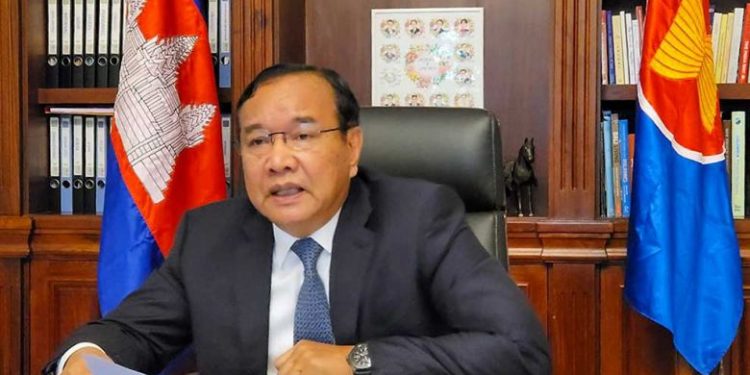 In a press release on July 12, the foreign ministry said Sokhonn’s participation at the conference is at the invitation of his Azerbaijanian counterpart Jeyhun Bayramov.

The conference is held under the theme Non-aligned Movement at the Center of Multilateral Efforts in Responding to Global Challenges, it said.

The virtual conference provides opportunities for NAM member states to take stock of the progress they have achieved in realising the movement’s agenda since the Baku summit of 2019, as well as to discuss and exchange views on how NAM could respond to current and future challenges more effectively.

According to the foreign ministry, Sokhonn’s remarks focused on how to address global challenges through cooperative multilateral efforts, strengthen the values of multilateralism and international cooperation, Cambodia’s stance in support of multilateralism as a means of maintaining peace and how to attain sustainable development and prosperity for all in the fourth industrial revolution, among other topics.

Kin Phea, director of the Royal Academy of Cambodia’s International Relations Institute, said Cambodia’s participation in NAM is a reflection of the foreign policy inherited from the late King Father Norodom Sihanouk, which was formulated in his Sangkum Reastr Niyum era.

The late King Father’s practical and philosophical commitment to neutrality was the reason for Cambodia’s participation as a co-founder of NAM.

“Firstly, this movement is a political legacy that Cambodia has always adhered to. The second aspect is constitutional. The Cambodian Constitution clearly defines our foreign policy position as being permanently neutral and non-aligned,” he said.

Cambodia’s participation in this movement is necessary because the world is now returning to a “Cold War” dynamic with two superpowers struggling against each other for regional and global supremacy, he said.

“For a small country like Cambodia, the option of maintaining its neutrality in foreign policy is a good choice and must be adhered to. With any area [of foreign policy] Cambodia has to stand on a neutral position, but one that benefits the country,” he said.

He added that the principle of Cambodia’s multilateralism is that the country will always contribute to all cooperative efforts and mechanisms, both regionally and globally – and now there are many challenges that require the joint efforts of all countries to solve them.

Cambodian Institute for Democracy president Pa Chanroeun also noted that the Cambodian Constitution clearly states that the Kingdom is neutral and does not belong to any faction.

“Therefore, continuing to participate in conferences that maintain a neutral, non-aligned or global political position is something that Cambodia should do in accordance with our Constitution.

“It’s not only to respect the spirit of the Constitution, but also to implement what is required by the supreme law of the Kingdom,” he said.