Leaders of Azerbaijan, France, Armenia and the EU met at a video conference 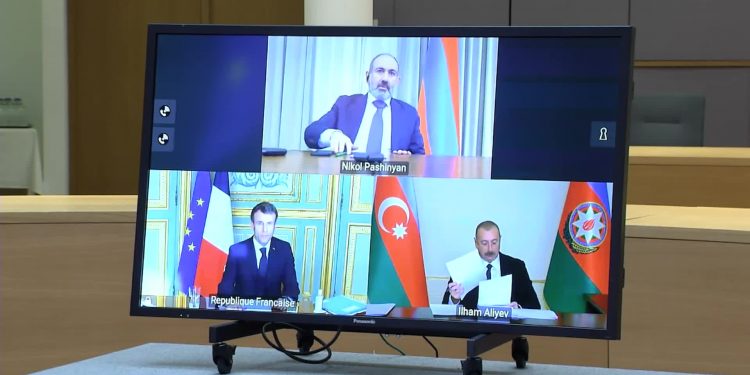 According to AZERTAC, the leaders first stressed the importance of the joint meeting with President of the Republic of Azerbaijan Ilham Aliyev and Prime Minister of Armenia Nikol Pashinyan initiated by President Charles Michel in Brussels on December, 14 2021.

Then, as a continuation of the Brussels peace agenda, detailed discussions were held on the normalization of Armenia-Azerbaijan relations. In this regard, in accordance with the pre-planned agenda of the event, the sides exchanged views on various aspects of relations between the two countries, including humanitarian issues, confidence-building measures, the problem of landmines Azerbaijan is facing, the opening of communications, border delimitation and demarcation, and the start of talks on a peace treaty.

In the discussions, President Ilham Aliyev put a special emphasis on the issue of stepping up international support for Azerbaijan to determine the fate of persons who had gone missing during the First Karabakh War, mass burial sites, mine clearance of areas liberated from occupation and opening of a railway and road transport corridor.

The head of state pointed out that 3,890 citizens of Azerbaijan, including 71 children, 267 women and 326 elderly people had gone missing during the First Karabakh War.

President Ilham Aliyev stressed that 36 Azerbaijani citizens had been killed and 165 wounded by landmines since the end of the Patriotic War.

The issue of a UNESCO mission to Azerbaijan and Armenia was also discussed at the meeting, and the sides agreed that a mission would be sent to both countries.