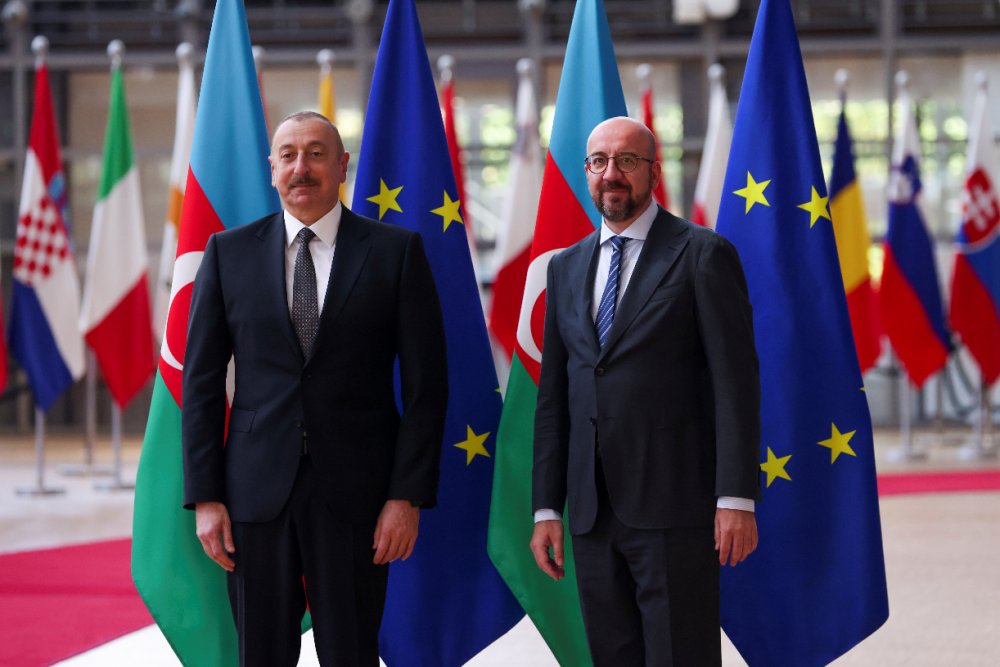 The ongoing war in Ukraine is hardly a distant matter for the average American, given the parallel crises of rising inflation and tumbling stock values. For many, a once-unthinkable question suddenly feels legitimate: Can the United States maintain its status as a global power?

Indeed, President Joe Biden blames Russia for today’s high gas prices and other conundrums. But going beyond pointing figures at Moscow, the United States must focus on concrete strategic actions, such as by turning to a recent landmark European Union (EU) agreement for inspiration.

On July 18, European Commission president Ursula von der Leyen announced that a memorandum of understanding (MoU) had been signed to more than double the supply of gas from Azerbaijan to the EU through the expansion of the Southern Gas Corridor (SGC), which spans nearly 2,200 miles across seven countries and three pipelines. The route’s gas supplies from Azerbaijan to EU nations will increase from 8 billion cubic meters in 2021 to 12 billion cubic meters this year, and then to 20 billion cubic meters over the next few years. Crucially, Von der Leyen declared that the EU took this step to “diversify away from Russia and to turn towards more reliable, trustworthy partners. And I am glad to count Azerbaijan among them.”

Although the Russo-Ukrainian War and its associated energy crisis have thrust the SGC into the spotlight, the initiative’s strategic significance has been mounting for far longer. First proposed in 2008 in the European Commission’s “Second Strategic Energy Review – An EU Energy Security and Solidarity Action Plan,” the SGC became fully operational in November 2020. From that point onward, the days of Russia’s monopoly over the European energy sector have been numbered. As von der Leyen acknowledged, “already before Russia’s brutal invasion of Ukraine, the Russian gas supplies to Europe were no more reliable.”

Now, the expansion of the SGC during this urgent moment of the Ukraine war powerfully affirms Azerbaijan’s broader vision behind the triple-pipeline project’s establishment. This is where years of preparation have met opportunity.

In addition to the benefits of energy diversification for its own continent, Europe’s new MoU with Azerbaijan has dealt an unprecedented blow to Russia by hitting the Kremlin where it hurts the most: its bottom line. Russia has historically been the world’s leading exporter of natural gas, and approximately half of its crude oil exports went to Europe in 2021. Additionally, EU countries paid $105 billion for Russian energy imports last year.

To date, the U.S. strategy to counteract Russia has relied on sanctions and bans on imports. Yet, the EU’s new agreement with Azerbaijan displays an extra layer of strategic sophistication, in that it is simultaneously poised to strengthen the European economy and diminish Moscow’s influence. While they have sought to send a strong message to Moscow, the Biden administration’s moves have resulted in heightened gas prices and other economic challenges for Americans.

Washington should also take note of the EU’s effort to forge closer ties with Azerbaijan,  recognizing the South Caucasus nation as a cornerstone of the North-South and East-West transport corridors as well as a unique bridge between the Asian and European continents. This month, the United States and Azerbaijan marked the thirtieth anniversary of diplomatic relations—a partnership in which the nations work together to promote European energy security, expand bilateral trade and investment, and combat terrorism and transnational threats. In a fraught and complex region, Azerbaijan’s rare status as a secular and moderate Muslim-majority nation—in fact, the Muslim world’s first parliamentary republic and first state to grant women the right to vote—underscores not only Baku’s strategic significance for Washington but the enduring importance of the countries’ shared values. As Russia continues its aggression in Ukraine and receives increased support in countering the West from radical actors like Iran, it is incumbent upon U.S. policymakers to cultivate a levelheaded Eurasian ally such as Azerbaijan, the only country that borders both Russia and Iran.

As two wars—the Russo-Ukrainian War and the U.S.-Russia influence war—seemingly have no end in sight, the United States can work toward preserving its global standing by putting more energy into strategically beneficial alliances.

Paul Miller is a media and political consultant based in the Chicago area. His commentary has been published in USA Today, the New York Daily News, the New York Post, Newsweek, and The Hill.