Lukashenko-Aliyev informal meeting was nearly 5 hours, over by midnight 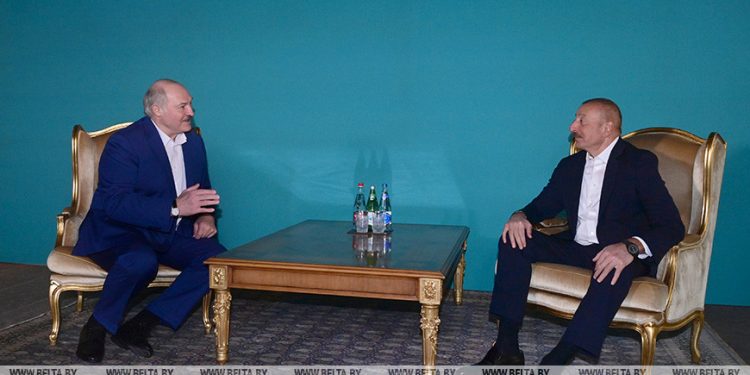 Aleksandr Lukashenko went to meet with his Azerbaijani counterpart immediately after he arrived in Baku. The presidents met at about 19h00. The informal talks continued until midnight.

It is not yet known what issues the leaders discussed. But earlier the press service of the Belarusian president informed that the heads of state were set to consider “the main areas of the Belarus-Azerbaijan relations and strategic issues of the bilateral cooperation.” At about 22h00 the Telegram channel Pul Pervogo reported that “thick files of documents” were taken to the negotiating room and that “the presidents were discussing mostly international issues that evening”.

On 14 April, Aleksandr Lukashenko and Ilham Aliyev will hold official talks at the residence of the Azerbaijan president. As expected the main focus will be on ways of expanding trade and economic cooperation and filling the cooperation with new content.

In 2020, the Belarus-Azerbaijan trade came close to $500 million. Azerbaijan was among Belarus’ top 15 trading partners. But, last year was difficult for the development of economic cooperation, primarily because of the pandemic situation, Belarusian Ambassador to Azerbaijan Andrei Ravkov said when talking to the press. Belarus’ exports to Azerbaijan expanded by more than 30 commodity items. For example, Belarusian food products have proved well on the Azerbaijani market. Stadler trains were also among major contributors to the trade.

“Therefore, increasing the export potential between our states is the task that we need to work on. The visit of the head of state also serves this purpose,” Ambassador Andrei Ravkov said. “A visit at the highest level is not only a political matter. It means, first of all, giving impetus to the relations between the two countries and to the state apparatus to work on the common ground for the benefit of our peoples.”