The sixth Caspian Summit with the participation of the leaders of the "G5" was not rich in surprises, but certainly outlined interesting trends in the new regional geopolitics. 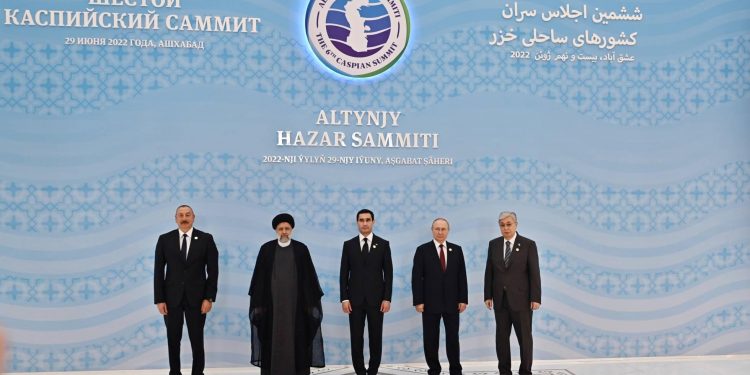 Assessing its results, we can conclude that Azerbaijan used a special tactic on the sidelines of the summit – the emphasis was placed on promoting cooperation vectors not only with the Turkic countries of the Caspian region but also on strengthening strategic flanks with the Iran–Russia bloc. And there are interesting breakthroughs here.

There was no sensation at the forum: Iran has not ratified the Convention on the Legal Status of the Caspian Sea. Although, in the light of new realities, Russia itself is particularly in favour of signing it. Which, as analysts and experts assumed even on the eve of the summit, would not put too much pressure on Tehran, with which Moscow now has quite important partnerships – political, economic, and even logistical. But it will certainly be polite to hurry up, even after the summit is over.

When discussing Caspian cooperation, it is impossible to overlook the unique configuration of the participating countries’ relations: the presence of a conditional Turkic bloc represented by Kazakhstan, Azerbaijan, and Turkmenistan on one side, and the Russia-Iran bloc on the other. In this sense, the Turkic states of the Caspian region cooperate very closely with each other within the framework of a number of organisations – for example, the Organisation of Islamic Cooperation, the Organisation of Turkic States, the CIS, the Organisation of Economic Cooperation. And there are many promising areas here: Azerbaijan is starting to build a new line of a successful strategic partnerships with Kazakhstan. And the trilateral meeting of the Azerbaijani, Kazakh and Turkish foreign and transport ministers in Baku, which has just ended, is already a concrete result of this direction. The generator of these links is new logistics, transport flows from Central Asia through Azerbaijan to Türkiye, and then to Europe. And the key link here is the expected launch of the Zangazur corridor.

It is clear that this “Turkic Silk Road” is extremely in demand at two poles – both in the West and in China, and it will increase its potential extremely quickly. In this sense, another thing is also clear – the Caspian Sea is becoming a very important bridge of this cooperation, where many of its transits through the largest lake in the world will be carried out by the Turkic countries bypassing Russia.

Russia’s departure from this format is an obvious fact that Moscow is already aware of, but it still needs to finally accept it as the inevitable consequence of geopolitical ambitions – every such radical step as war has its own exhaust. And this is perhaps the most important leitmotif of the summit, which, of course, was not spoken out loud, but was implied.

Another thing is that such a negative has thoroughly activated Russia’s think tanks and has served as a catalyst for a slew of new Caspian Sea development projects. Thus, Moscow offered the summit participants a whole “cultural mass” agenda, which is very different from the usual package of discussions – trade, transport, energy and military cooperation. This includes the accelerated development of maritime tourism in the Caspian Sea, and cultural events, including the organisation of the Caspian Film Forum. Russian President Vladimir Putin himself made similar initiatives at the summit.

And negotiations with the Russian president have become one of the important points of Azerbaijani diplomacy at the summit for Ilham Aliyev. At least two important tasks had to be solved here: to balance Baku’s active partnership with the Turkic countries of the Caspian region with new negotiations with Moscow, and to promote new vectors of political and economic cooperation between our countries during the negotiations themselves.

And it should be noted that Azerbaijani President Ilham Aliyev’s initiatives caused an interesting reaction from the Russian leader. Vladimir Putin thanked the Azerbaijani president for the ideas concerning the Caspian region cooperation.

“I would like to thank you in particular for the ideas that you formulated during our informal communication, informal lunch. It was businesslike in the highest sense of the word, colleagues expressed many interesting proposals for the development of regional cooperation,” Putin said.

The Russian president also noted with great satisfaction the growth of trade turnover between the two countries, which, according to his estimates, increased by more than 16 per cent last year, and by about 6 per cent in the first three months of this year.

“That is, steady growth continues,” Putin summed up.

The state leaders also went through the political agenda and judging by its results, Baku is successfully consolidating contacts with Moscow. The Russian president noted, by the way, that Russian Prime Minister Mikhail Mishustin and State Duma Chairman Vyacheslav Volodin are expected to visit Baku.

The talks between the Azerbaijani and Iranian leaders are another important chord of Baku’s political strategy in Ashgabat. The interaction of the Caspian troika – Baku, Tehran and Ashgabat – also plays a significant role here. The agreement they concluded on swap gas supplies from Turkmenistan to Azerbaijan via Iran, totalling about 2 billion cubic metres, is an important event in the Caspian region’s history. Meanwhile, Azerbaijan and Turkmenistan have their own “gas” history: the Dostlug field, which the parties agreed to develop jointly.

The negotiations of the leaders of the countries at the summit were not supported by the signing of any specific documents. But the indicated trends turned out to be even more important than that. Iranian President Ebrahim Raisi expressed great interest in building up ties with Azerbaijan in many areas.

“The potential of relations between the two countries is currently greater than used. I believe that the two countries’ political, economic, trade, and cultural ties can grow stronger than they are now,” Raisi said.

Considering that less than a year has passed since the memorable Iran-Azerbaijan conflict, which almost turned into an armed confrontation from the diplomatic plane, the spirit of such a dialogue is more than impressive. Meanwhile, Baku and Tehran have recently established cooperation in various fields, including in the liberated territories in Karabakh.

There is also the first swallow of Ashgabat, moreover, a very significant one: Azerbaijan and Iran are planning joint work on the restoration of the Khudaferin Bridge. At the same time, according to Iranian analysts, Tehran has chosen regional cooperation with the Caspian states, including Azerbaijan, as a priority. Iran even intends to create an infrastructure for regional cooperation and an appropriate security structure, which may lead to a further increase in the level of ties between the Caspian states. It is quite clear that under the concept of infrastructure, Iran also means the construction of the Zangazur corridor, one of the branches of which is planned to be carried out in Iran.

“Today, at a meeting in a narrow format, my colleagues and I exchanged views on an issue that is of particular concern, namely, the shallowing of the Caspian Sea. We have been observing this for many years, and, unfortunately, the dynamics of shallowing is alarming,” the president said, adding that the delegations that visited Ashgabat will continue to work towards the creation of special expert groups to identify the causes of such an environmental disaster and identify measures to prevent further shallowing of the Caspian Sea.

In this case, Ilham Aliyev acted, as usual, as a visionary of promising tasks. Azerbaijan is already thinking over a new strategy in connection with the shallowing of the Caspian Sea, and it is quite obvious that the solution to this issue is vitally important for all “Caspian people”.