Statements were adopted in Chicago, Illinois, Durham, Fayetteville, Apex, Charlotte, North Carolina, and Greer, South Carolina to recognize May 28, 2021 as the Day of the Republic of Azerbaijan. 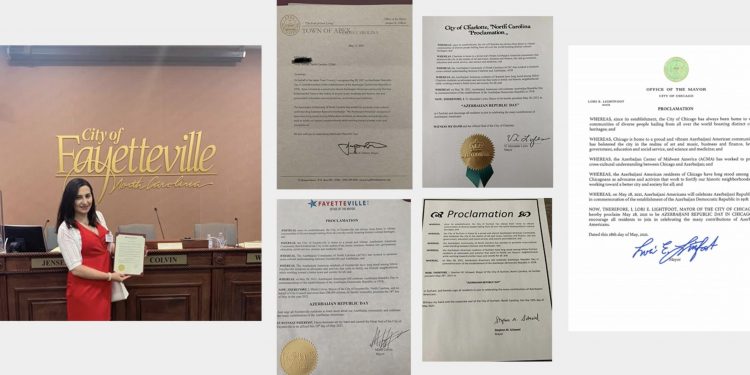 The statement, signed by Chicago Mayor Lori Lightfoot, Durham Mayor Stephen Shewel, Fayetteville Mayor Mitch Calvin, Apex Mayor Jacques K. Gilbert and Charlotte Mayor Alexander Lyles, Greer Mayor Richard W. Danner said that since their establishment, these cities have become the home of various communities with different cultural heritage from all over the world. This also belongs to the proud American Azerbaijani Community, which contributes to the development of arts and music, trade and finance, law and government, education and social services, science and medicine in these cities.

It was noted that the Azerbaijani Center for the Midwest America (ACMA) and the Azerbaijani community in North Carolina are working to promote intercultural understanding between Chicago, Durham, Fayetteville, Apex, Charlotte and Azerbaijan, for a better city and society. “Therefore, on the occasion of the next anniversary of the establishment of the Azerbaijan Democratic Republic in 1918, I declare May 28, 2021 the Day of the Republic of Azerbaijan,” he said.

It should be noted that, the statements were made at the initiative of Farid Mammadov and Mehriban Mammadova, head of the Azerbaijan Center for the Midwest America in Illinois, and Adika Iqbal, head of the “Azerbaijan Friendship Organization” in North Carolina and South Carolina.