"The President of the European Council, Charles Michel, hosted the President of the Republic of Azerbaijan, Ilham Aliyev, and the Prime Minister of the Republic of Armenia, Nikol Pashinyan, for a discussion on the evolving situation in the South Caucasus region and ways forward regarding EU relations with both countries", a statement posted on the website of the European Council late on Tuesday (14 December) stated. 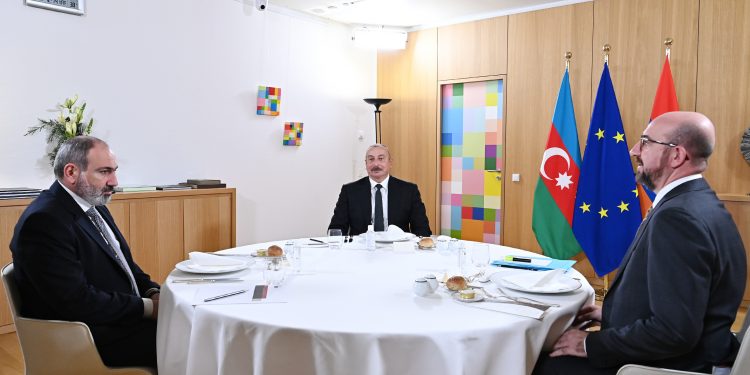 Aliyev and Pashinyan met Michel for more than four hours of talks, ahead of the Summit of leaders of EU and Eastern Partnership countries which will take place on Wednesday.

The statement, issued immediately after the meeting, added:

“President Michel assured both leaders of the EU’s commitment to work closely with Armenia and Azerbaijan in overcoming conflict, creating cooperation and an atmosphere of trust, with a view to sustainable peace in the region ultimately underpinned by a comprehensive peace agreement. The common aim of all three leaders is to build a South Caucasus that is secure, stable and prosperous for the benefit of all people living in the region.

Prime Minister Pashinyan and President Aliyev reconfirmed that key commitments undertaken in the framework of the two trilateral statements of 9 November 2020 and 11 January 2021 would be honoured and that understandings reached in Sochi on 26 November 2021 should be built upon.  President Michel commended steps taken by both leaders to ensure the de-escalation of tensions following recent armed clashes along the border between Armenia and Azerbaijan. In particular, the successful establishment of a direct communication link between the Ministers of Defence of both countries, facilitated by President Michel, was acknowledged. This mechanism can serve to prevent future incidents and make a positive impact by helping de-escalate tensions on the ground. .

President Michel stressed that resolving key humanitarian issues is of crucial importance. He welcomed the recent release of ten Armenian detainees by Azerbaijan and the handover of all remaining mine-maps by Armenia. He called for the full and speedy resolution of all outstanding humanitarian issues, such as the release of further detainees and addressing the fate of missing persons, while recognising that humanitarian gestures by both sides also promote confidence and help create an environment conducive to progress towards peace and reconciliation. The EU will continue to support humanitarian de-mining efforts, including by providing expert advice, and assistance to conflict-affected populations, rehabilitation and reconstruction. The EU will also continue to support confidence building measures between Armenia and Azerbaijan.

The leaders discussed key existing and prospective trade and economic partnerships between the EU and both countries.  They also discussed the EU’s intention to launch an economic advisory platform to build confidence, contribute to peaceful coexistence and build up economic cooperation in the region.

President Aliyev and Prime Minister Pashinyan agreed that in the context of the planned launch of negotiations on the delimitation and demarcation of the state border between Armenia and Azerbaijan, further tangible steps will need to be taken to reduce tensions on the ground to ensure a conducive atmosphere for the talks. President Michel called on both Yerevan and Baku to actively engage in good faith and to work towards de-escalation. He stressed that ensuring the appropriate distancing of forces is an essential element of incident prevention. The EU will make available an expert mission/consultative group to support the border delimitation and demarcation issues by providing technical assistance to both countries.

President Michel also emphasised the importance of restoring communications infrastructure between Armenia and Azerbaijan in particular and the South Caucasus more broadly, while fully respecting the sovereignty of all countries. It was agreed to proceed with the restoration of railway lines, with appropriate arrangements for border and customs controls, based on the principle of reciprocity. The EU is ready to support the development of connectivity links, in line with its Economic and Investment Plan. The proposed economic advisory platform can also support this process.

The leaders agreed to follow-up on outcomes of their meeting and to stay engaged.”

commonspace.eu with the press service of the Council of the European Union