Two Azerbaijani journalists and a regional official were killed in a landmine explosion Friday in a district recaptured from Armenian separatists during last year’s war for Nagorno-Karabakh, officials said. 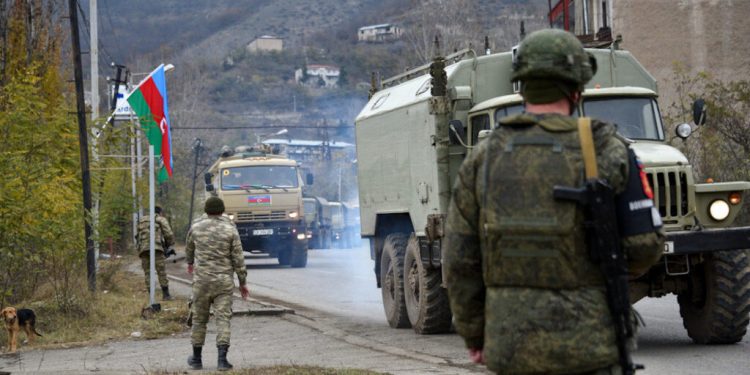 Clashes broke out between Azerbaijan and Armenia in September 2020 over the disputed Nagorno-Karabakh region. Photo: AFP

The explosion follows a series of incidents involving soldiers from Armenia and Azerbaijan along their borders that has put pressure on a Russian-brokered ceasefire ahead of elections in Armenia.

Azerbaijan’s interior ministry and the office of the prosecutor general said the blast occurred around 11:00 (0700 GMT) in the region that was recently held by Armenian separatists.

“A truck was blown up by an anti-tank mine in the village of Susuzlug in the Kalbajar district, killing three civilians,” the statement said.

Video published by state television, purporting to show the aftermath of the scene, showed a burnt out vehicle blown sideways on a narrow shrub-lined road, with at least one corpse visible in the grainy footage.

The statement identified the victims as journalists working for state-run AzTV station and AzerTag state news agency, as well as a local official.

Fighting broke out between Azerbaijan and Armenia in September last year over the disputed Nagorno-Karabakh region and claimed some 6,000 lives over six weeks.

The war was halted by a ceasefire brokered by Moscow that saw Yerevan cede swathes of territory it had controlled for decades, including the Kalbajar district.

Seven Azerbaijani troops and 15 civilians have died and 106 more were wounded in landmine explosions in and near Nagorno-Karabakh since the ceasefire, the Azerbaijani government has said.

The mountainous region of Nagorno-Karabakh is one of the most heavily mined regions in the former Soviet Union.

Both Azerbaijani and Armenian forces used the weapons during a bloody conflict in the early 1990s.

In April, Azerbaijani President Ilham Aliyev criticized Armenia for the refusal to provide Baku with maps of minefields in Nagorno-Karabakh.

He said at the time landmines were the main obstacle for the return of displaced people to the territories retaken from Armenian separatists.

Some 750,000 Azerbaijanis fled when Baku lost control of the majority Armenian-populated region of Nagorno-Karabakh and seven adjacent districts in the 1990’s war against Armenian separatists.

Tensions have been again running high since May, when Armenia accused Azerbaijan’s military of crossing its southern border to “lay siege” to a lake shared by the two countries.

Moscow said it would help with the delimitation and demarcation of the neighbors’ borders.

Aliyev said last month that Azerbaijan was ready for peace talks with Armenia, while Pashinyan announced later the two ex-Soviet nations were holding discussions on the delimitation and demarcation of their shared borders.

Ethnic Armenian separatists in Nagorno-Karabakh broke away from Azerbaijan around the collapse of the Soviet Union in a conflict that claimed the lives of some 30,000 people.