Baku supports the normalisation of Turkish-Armenian relations if…

The 44-Day War and therein the liberation of the occupied territories of Azerbaijan have brought about various opportunities for regional co-operation, peace and development in the South Caucasus. 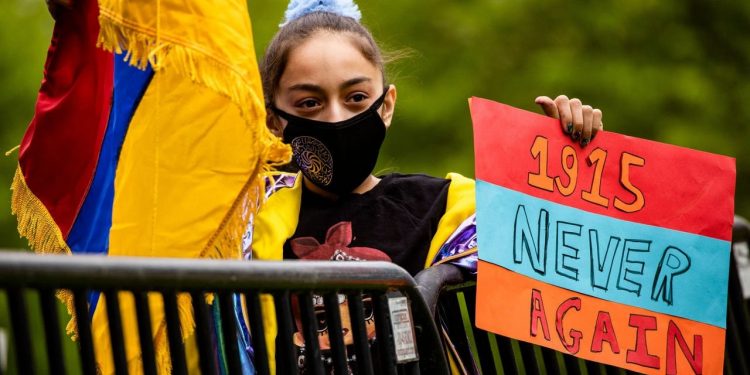 This new situation promises a better future not only for Azerbaijan but also for Armenia, whose borders with Turkey and Azerbaijan have been closed since the First Karabakh War, leaving it out of all major regional transportation and energy projects.

The trilateral ceasefire deal, which was signed on 10 November 2020 by the leaders of Armenia, Azerbaijan and Russia, and which put an end to the 44-Day War, called for the re-opening of all regional transportation and communication links. Although this did not explicitly mention the borders between Armenia and Turkey, it was largely expected that the two countries would also agree to open borders, as the major reason for their closure by Turkey – ie the occupation of Azerbaijani territories by Armenia – has been resolved.

Armenian leaders are particularly excited about the potential benefits that reopening the country’s closed borders and unblocking transportation routes could bring. For example, the Armenian minister of the economy, Vahan Kerobyan, anticipates that unblocking regional transport and economic connections will increase Armenia’s GDP by 30-percent over the course of two years. Similar optimism has been shown by other members of the government, including the prime minister, Nikol Pashinyan.

Over the last few weeks, Turkey and Armenia sent positive messages to each other about the new opportunity to normalise their bilateral relations and open their borders. This is the second major attempt of the two countries towards this end. In 2009, when they previously came to an agreement over the establishment of diplomatic relations and opening of borders, Azerbaijan communicated its concerns to the Turkish government saying that this would negatively affect its efforts to liberate Azerbaijan’s occupied territories as, at the time, the occupation was continuing. Considering Azerbaijan’s concerns, Ankara refused to ratify the agreement with Armenia.

The resolution of the Karabakh conflict changed the situation in the region. Azerbaijan has itself declared readiness to sign a peace treaty with Armenia, to open their borders and build diplomatic relations. Not only does Azerbaijan no longer oppose the building of diplomatic relations between Turkey and Armenia, it has also been supportive of the establishment of a six-state (Armenia, Azerbaijan, Georgia, Turkey, Iran, and Russia) regional co-operation platform.

“Given the new situation [after the 44-Day War], we have a positive attitude towards the normalization of Armenia-Turkey relations […] Turkey will decide on its own when the borders can be opened and when relations with Armenia will be normalized. In any case, there will be no negative opinion from Azerbaijan,” President Ilham Aliyev of Azerbaijan said in late February at a press conference.

Truly, in the wake of the recent developments between Yerevan and Ankara towards normalisation, there have been no negative reactions from Baku. Azerbaijan sees this as a component of larger peacebuilding initiatives in the region and an important milestone towards realising the six-country regional co-operation platform initiative.

Nevertheless, although there is no negative opinion about this process in Baku, there are some expectations. Relations between Azerbaijan and Turkey have evolved to such a high level that Turkey’s moves vis-à-vis Armenia are expected by Azerbaijanis to be made in co-ordination with Azerbaijan as this is still seen as an important point of leverage in the negotiations with Armenia. In particular, Armenia’s refusal to sign a peace agreement with Azerbaijan recognising its territorial integrity and its rejection of the Zangezur corridor between the western regions of Azerbaijan and its Nakhchivan exclave remain challenges for Baku at this stage of the post-war period. Here, Turkish support remains crucial.

Reaffirming the Turkey-Azerbaijan strategic partnership, Turkey’s President Recep Tayyip Erdogan has recently conditioned the normalisation of relations between Turkey and Armenia on the latter’s consent to open transportation corridors in the region. Erdogan also echoed Baku’s demands for the official recognition of its internationally recognised territorial integrity by Armenia. He underlined that “respect for each other’s territorial integrity and sovereignty” should be the basis for good neighbourly relations in the region.

This condition is not, however, an issue only in Armenia-Azerbaijan relations – Armenia has, implicitly, similar territorial claims against Turkey as well.  Thus, territorial claims exist even in Armenia’s Declaration of Independence, which is affirmed by the Constitution of the Republic of Armenia. The document names the eastern parts of modern Turkey as “Western Armenia”, while it explicitly calls for the reunification of Armenia and Nagorno-Karabakh.

Last year the Armenian government celebrated the 100th anniversary of the defunct Sevres Treaty, according to which the north-eastern parts of modern Turkey were to be given under the control of Armenia. This treaty never came into force and was soon replaced by another treaty – the Treaty of Lausanne – by which the international borders of modern Turkey were officially recognised. Addressing a “scientific conference” on 100 years since the signing of the Sevres Treaty, Pashinyan declared that “Although the Treaty of Sevres was never implemented, it continues to be a historical fact, which reflects our long journey to restore our independent statehood. We are bound by duty to remember it, realize its importance and follow its message.”

At this stage of the post-war peace negotiations, Armenia is, therefore, expected by Azerbaijan and Turkey to renounce all these territorial claims and agree to normalise relations on the principle of respect for each other’s territorial integrity. Should Armenia come to terms with this condition, not only the normalisation of Turkish-Armenian relations, but also of those between Armenia and Azerbaijan would be possible.