The great victory of Azerbaijan in the 44-day Patriotic War did not only create a new reality in the region but also ushered in a novel phase of the Azerbaijani relations with partner countries and international organizations. 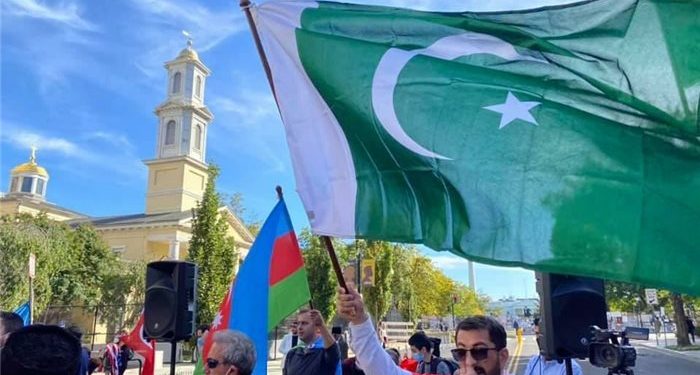 Overall, this war can be called a tester for the determination of the true nature of bilateral relations with Azerbaijan. Countries shown true friendship with Azerbaijan have successfully passed this test, laying the foundation for further strengthening mutual relations.

Pakistan has also exhibited an exemplary case of friendship by unswervingly supporting Azerbaijan’s just cause. Our relations with Pakistan, the state supporting the just position of Azerbaijan for almost 30 years, and the settlement of the former Armenia-Azerbaijan Nagorno-Karabakh conflict only within the territorial integrity of Azerbaijan, stems from the will of our brotherly nations with common historical, religious, and cultural roots. It is gratifying that our strategic partnership, built on solid foundations, has been developing upward yearly. Specifically, the determination of Pakistan to restore the territorial integrity of Azerbaijan has always been greatly appreciated. Pakistan has also been one of the closest supporters of Azerbaijan on international platforms. The mutual support of our countries in an international arena has further strengthened our bilateral ties and connections. It is no coincidence that Pakistan is a member of the Organization of Islamic Cooperation (OIC), the international and regional organization always standing by the side of Azerbaijan.

It should be noted that Pakistan has also been among the signatories of several resolutions adopted by the OIC on the former Armenia-Azerbaijan Nagorno-Karabakh conflict, expressing unequivocal support for Azerbaijan’s position of justice based on international law and its principles. In April 2016, at the XIII Summit held in Istanbul, the Contact Group on Armenia’s aggression against Azerbaijan was established within the framework of OIC and foreign ministers of respective states. The first meeting of the Contact Group consisting of 7 member states was held in 2016 as part of the Istanbul Summit. Over the years, the Group, also including the brotherly state of Pakistan, has focused its mission on accelerating the resolution of the conflict and drawing the attention of key powers to the long-existent territorial issue. The first meeting of the Contact Group on Nagorno-Karabakh was held within the framework of the 71st permanent session of the UN General Assembly. In short, the short-term, however, an effective course of activities by the Contact Group has further contributed to raising awareness by drawing particular attention to the conflict.

The Organization of Islamic Cooperation similarly exhibits a real example in the post-conflict period. At the novel stage, both the OIC and the Contact Group are working to ensure lasting peace in the region.

During his visit to Azerbaijan in the first week of April, at a meeting with President Ilham Aliyev, OIC Secretary-General Yusuf bin Ahmad Al-Osaymin again reiterated the victory of Azerbaijan as a victory for the whole Islamic world. As Mr. Osaymin stated “Your issue was a matter of justice – the lands belonged to you, the international law was on the side of you, supporting you by its adopted resolutions Organization of Islamic Cooperation was also with you.

Here we talk about 20 percent of the territory of your country, a huge part of Azerbaijan. Thank God, your wisdom and patience had its worth, and the issue was resolved positively and justly”. For this sincerity and friendly attitude, the President of the Republic of Azerbaijan Mr. Aliyev awarded His Excellency Mr. Osaymin with the Order of Friendship. This order in the person of His Excellency Mr. Osaymin was an appreciation of Azerbaijan for the objective and just position of the OIC. As noted during the meeting, the 44-day war put an end to the 30 years of occupation of historical and lawful Azerbaijani lands that previously led to the suffering of more than one million Azerbaijanis and the destruction of our cities and towns.

As foreign journalists and diplomats visit the liberated territories, they get a chance to view the massive deconstruction committed by Armenians. All cities, villages, towns, historical and religious sites, mosques, and cemeteries were destroyed, looted, and desecrated. The President of Azerbaijan Ilham Aliyev rightly noted these acts as a manifestation of vandalism, Islamophobia, and hatred towards Azerbaijanis. Hence, our cities were not destroyed during the First Karabakh War, but later – during the occupation. This was a deliberate policy of Armenians to erase the Azerbaijani and the Islamic heritage to alter the origins of the historical lands of Azerbaijan. Seeing Armenian vandalism, members of the Contact Group on the settlement of the former Armenia-Azerbaijan Nagorno-Karabakh conflict also got acquainted with these facts.

As soon as the war ended, Azerbaijan commenced the restoration work on its recently liberated historical lands. Azerbaijan wants our brothers from the Islamic world to visit the recently-freed areas to get acquainted with the reconstruction process and see what Armenians have done to our historical heritage for almost 30 years. Using mosques as stable sites is an insult to the whole Islamic world. By ending 30 years of occupation, Azerbaijan has prevented years of vandalism and terror against Islamic heritage otherwise yet to come. We will restore all our religious monuments with their original and authentic images. Friendly and brotherly states to Azerbaijan will also be closely involved in this process.

The members of the Contact Group of the Organization of Islamic Cooperation (OIC) got an opportunity to visit Ganja, the second-largest and beyond conflict zone city in Azerbaijan, subjected to horrific war crimes and banned missile strikes during the war.

The impressions of the delegation on Ganja, the city where dozens of innocent civilians were killed and civilian infrastructure was destroyed due to Armenian missile strikes, were terrifying and impressive. The members of the Contact Group will shortly prepare a report on the results of these important visits. The delegation also plans to share its impressions from the visit to the liberated territories at a meeting of OIC foreign ministers in Islamabad next year.

The Islamabad meeting aims to call upon the support for the restoration of the liberated territories of Azerbaijan. Overall, after the restoration of its territorial integrity to turn Karabakh into a paradise, Azerbaijan is still continuously working to convey the Karabakh realities to the international community in the post-conflict period. In this regard, Azerbaijan always welcomes, appreciates, and needs the support of its friendly and brotherly states.

Konul Nurullayeva, Member of Parliament at the Parliament of the Republic of Azerbaijan