Pledging support for the revival and reconstruction of Azerbaijan's Nagorno-Karabakh, President Recep Tayyip Erdoğan called on regional countries to join efforts of cooperation for peace and stability. 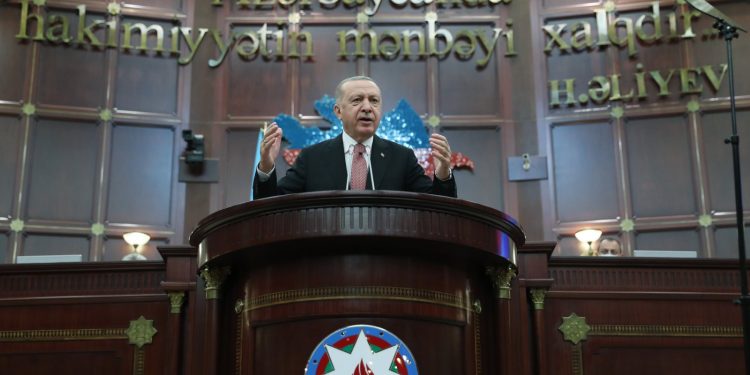 Turkey believes that permanent peace is possible through mutual security-based cooperation among states and people in the South Caucasus region, President Recep Tayyip Erdoğan said Wednesday as he addressed Azerbaijan’s National Assembly in the capital Baku.

“Not only Azerbaijan, but all countries in the region, including Armenia, and the world will benefit from peace and tranquility in the Caucasus,” he said.

Erdoğan also stated that the “Zangezur Corridor” will not only benefit Turks or Azerbaijanis but also Armenians who can use railways connecting different parts of the world and terminate their self-imposed isolation.

Zangezur was part of Azerbaijan, but in the 1920s the Soviets gave the region to Armenia. After this move, Azerbaijan lost its link with Nakhchivan.

Azerbaijani projects in the Zangezur corridor will include highways and rail lines which would stretch across territories of Armenia’s Syunik region.

Following the completion of the railway, Azerbaijan will be able to reach Iran, Armenia and Nakhchivan uninterruptedly by train.

The president reiterated his proposal for a six-nation platform comprising Turkey, Russia, Iran, Azerbaijan, Georgia and Armenia for permanent peace, stability and cooperation in the region.

“Azerbaijan is rebuilding the villages and cities that they (Armenia) have burned down. We will also help and build a new Karabakh,” he added in his speech which was frequently interrupted by the enthusiastic applause in the room.

Erdoğan assured future support for Baku in all fields

A day earlier, both countries signed a declaration “on allied relations” aimed at deepening ties in several areas of cooperation, including security during a visit to Shusha, a city that Azerbaijan recaptured from Armenian occupational forces in last autumn’s conflict.

“Today is a historic day,” Azerbaijan’s President Ilham Aliyev said after the signing. “The declaration raises our relations to the highest level.”

Erdoğan, the first foreign leader to visit Shusha after it was retaken by Azerbaijan, also promised to open a Turkish consulate in the city. “In that way, we will ensure that our activities are carried out faster and more effectively,” he said.

Both countries also pledged “to support each other in case of threat or attack by a third country on their independence or territorial integrity.”

“We will give any kind of support needed for our Azerbaijani brothers to return to their homes,” Erdoğan said, referring to the displacement of tens of thousands of ethnic Azerbaijanis during the first Nagorno-Karabakh war in the 1990s.

Aliyev for his part hailed the opening of a transport corridor from Azerbaijan to Turkey via Armenia saying that it “creates great opportunities for the region.”

Azerbaijan seized back swathes of its Armenian-occupied territory last year in the conflict that erupted in Nagorno-Karabakh.

Relations between the ex-Soviet republics have been tense since 1991 when the Armenian military occupied Nagorno-Karabakh, a territory recognized as part of Azerbaijan.

A Russia-brokered peace deal that ended the hostilities between Baku and Yerevan last November was celebrated as a triumph in Azerbaijan. But it sparked a political crisis in Armenia, with thousands of opposition supporters taking to the streets to protest the terms of the deal and to demand the resignation of Armenia’s Prime Minister Nikol Pashinian.

Under pressure to step down, Pashinian called snap elections, and the vote is scheduled to take place on June 20.

Although Erdoğan called for cooperation in the region and Armenia to join efforts for regional stability, Armenia’s Foreign Ministry on Tuesday condemned Erdoğan and Aliyev’s visit to Shusha in a statement, calling it “provocative actions” that “significantly harm international efforts to establish stability in the region and (that) are absolutely unacceptable.”

Later on Wednesday, Erdoğan is expected to attend the Euro 2020 football match in Baku between Turkey and Wales.