Peacekeepers in Karabakh are escalating the tensions

Against the background of the difficult campaign and dramatic losses of the Russian army in Ukraine, provocations on the part of the personnel of the Russian peacekeeping forces temporarily deployed in the Karabakh region of Azerbaijan have recently been on the rise. 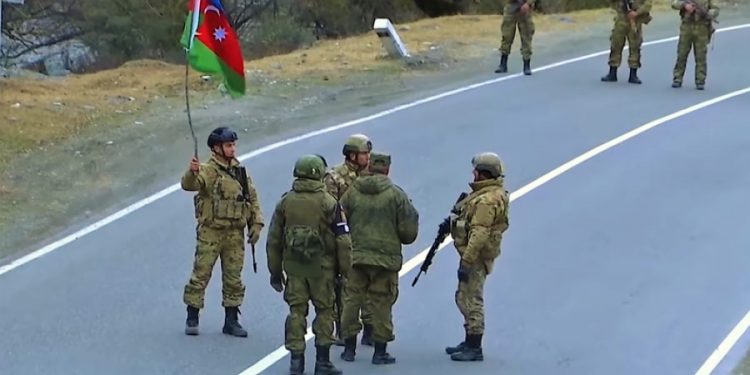 According to Caliber.Az sources in the military, on April 7 (remember this date, we will explain why later), the peacekeepers hoisted a Russian flag right in the abandoned village of Farrukh in Khojaly District of Azerbaijan. Not on their APCs, but in the village itself. This action itself is rather ridiculous and pointless, since we had reported a few days earlier that all strategic heights around Farrukh were under the control of our army, also providing a detailed video footage from this village.

There have been no changes in the operational situation since then, and our positions are being actively reinforced. We said in our video report that the Russian troops had indeed strengthened their presence in the village under the pretext of “protecting the houses abandoned by the Armenians”. But now the Russian peacekeepers went even further and planted their tricolor in the Azerbaijani village.

Moreover, the peacekeepers are currently trying to install surveillance cameras in Farrukh, which also raises questions. Let’s not forget that the Russian peacekeepers are in the territory of Azerbaijan without a mandate, their rights here are tenuous, and yet they are behaving in a rather defiant and provocative manner. Our sources mention that on April 7, an armed Armenian in civilian clothes stepped in front of a column of Azerbaijani military on the road to Aghdara and fired a shot in the air. All this happened not only right under the peacekeepers’ noses but under their approving smiles. While it would have been easy for the soldiers of the Azerbaijani army to dispose of the out-of-touch Armenian bandit, they nevertheless showed enviable composure and professionalism. They did not escalate the situation, although it left the gravediggers at Yerablur without certain earnings.

On top of that, the Armenians threw stones at our convoys twice in recent days. A familiar pattern, don’t you think? A blast from the past—from the late 1980s and early 1990s, this time under the aegis of the Russian peacekeepers turning a blind eye to the hooliganism of their wards.

Considering all of the above, there is no doubt that the Russian peacekeepers have received orders to deliberately exacerbate the situation in the region and bring it to the boiling point. What is this about? We cannot rule out that bright minds in Moscow may be trying to temporarily shift the focus from the stalled military campaign in Ukraine to another outbreak of violence in Karabakh. But we believe that Russia’s actions are rooted in its jealousy over the Brussels meeting between Aliyev and Pashinyan and the gradual loss of strategic monopoly in the Karabakh issue. The Kremlin is clearly unenthusiastic about the EU’s attempts to reconcile Baku and Yerevan. Recall that Lavrov had reprimanded his Armenian colleague Mirzoyan in Moscow the day before.

“I noticed that there was not a single mention of the Russian Federation in the communiqué Mr. Michel issued after his meeting with the President of Azerbaijan and the Prime Minister of Armenia. It is an indication of what the leaders of the European Union find more important: developing the achieved progress or using the Karabakh issue to promote their Russophobic views. It is sad,” Lavrov said.

As you may recall, the meeting in Brussels was held on April 6. The provocations of the Russian military in Karabakh began immediately on the 7th. The timeline speaks for itself. Karabakh is too explosive a region to become a platform for Russia sublimating its defeats on the Ukrainian fronts and venting resentment over the growing loss of the strategic initiative in the diplomatic process. The risks of escalation resulting from the failure to implement Paragraph 4 of the Trilateral Statement of November 10, 2020, should not be ignored. In this situation, any aggravation of tensions in the region would be a direct consequence of the irresponsible and defiant behavior of the Russian peacekeeping forces.