Post-war peace process between Armenia and Azerbaijan getting more complicated

Armenia-Azerbaijan relations are again getting dangerously tense, argues Vasif Huseynov in this opinion piece for KarabakhSpace.eu. “It is therefore urgent for the international community to take all possible measures to ensure the implementation of the ceasefire accord of 10 November 2020 and bring the sides to the negotiations table.” 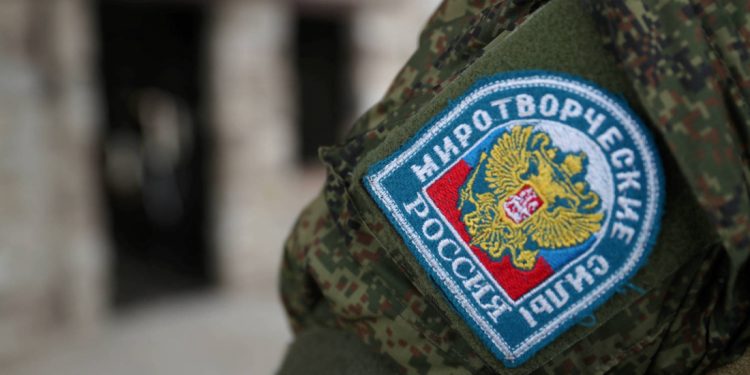 A sleeve patch worn by a Russian serviceman at an outpost established along the contact line in Nagorno-Karabakh and the Lachin Corridor mountain pass, 30 November 2020; Alexander Ryumin/TASS

Despite all the calls for peace and stability from various sides and international mediators, unfortunately, Armenia-Azerbaijan relations succumb to more escalations and armed clashes. Along with refusing to launch negotiations on a comprehensive peace treaty and put an end to all hostilities and enmities in the region, Armenia does not refrain from making new provocations against the Azerbaijani side, which risk the resumption of all-out military operations in the region.

On 11 August, Azerbaijan’s Defence Ministry declared that Armenia, violating the ceasefire deal of 10 November 2020, deploys its military forces to the territories of the Karabakh region that is under control of Russia’s peacekeeping forces. This is widely seen by observers as a potential casus-belli, since according to the ceasefire deal, “The peacekeeping contingent of the Russian Federation shall be deployed in parallel with the Armenian armed forces’ withdrawal.”

Azerbaijan has long warned that Armenia does not comply with this clause of the deal and transfers its military servicemen to Karabakh. For example, in his letter addressed to the secretary general of the United Nations on 1 March 2021, Azerbaijan’s foreign minister, Jeyhun Bayramov, warned against this threat declaring, “According to the credible information available to the Azerbaijani side, which is also validated by the reports of independent mass-media sources, members of [the] Armed Forces of Armenia, wearing civilian dress, are transferred to the territory of Azerbaijan through the ‘Lachin Corridor’ in civilian trucks, including disguised among the construction cargo, in an attempt to escape the control procedures of the Russian peacekeeping contingent”.

This situation breaches the agreement between the sides concerning the use of the “Lachin Corridor” only for humanitarian purposes, which is supposed to be supervised by the peacekeepers as they control all movement through the corridor. This is the reason why, after the recent reports, the Azerbaijani government more loudly declared its dissatisfaction with the Russian peacekeepers.

The first sentence of the above-mentioned statement of Azerbaijan’s Ministry of Defence said, “The complete withdrawal of the remnants of the Armenian armed forces from the territory of Azerbaijan, where the Russian peacekeeping forces are temporarily deployed, was not ensured” – which was a message to the Russian side that is the guarantor of the implementation of the ceasefire deal. The statement ends with a call to Russia: “In accordance with the provisions of the trilateral statement [dated 10 November 2020], the peacekeeping forces of the Russian Federation must put an end to the deployment of the Armenian armed forces in the territories of the Azerbaijan Republic, where they are temporarily deployed.”

The reaction of the Armenian government to these concerns of the Azerbaijani side was truly provocative. Although Azerbaijan has been warning against the deployment of Armenian military units to Karabakh for more than 6 months, Armenia’s Ministry of Foreign Affairs has just found a new “argument” to justify this illegality – after transferring its servicemen to the region in disguised form since the end of the war. The statement of the Ministry shared on 11 August distorts the ceasefire deal and argues that the 10 November declaration provides for the withdrawal of the Armenian forces only from the regions surrounding Nagorno-Karabakh, not from the Nagorno-Karabakh region itself.

The fact that Armenia has recently started to openly deploy its armed forces to the Karabakh region through the Russia-controlled Lachin Corridor and Russia’s peacekeepers turned a blind eye to this is a dangerous signal to the future of peace process in the region. Adding to this also Armenia’s attempts to distort the ceasefire deal of 10 November, it becomes clearer that Armenia and Azerbaijan might be at the edge of another full-scale armed conflict.

The reaction of the Russia’s Defence Ministry to the latest clashes between Armenia and Azerbaijan is quite ambiguous. On August 10 and 12, information bulletins of the Ministry of Defence of the Russian Federation on the activities of the Russian peacekeeping contingent in Karabakh declared that there had been fighting between the Azerbaijani armed forces and “the armed formations of Nagorno-Karabakh”. In its previous statement about the fighting in the vicinity of Shusha on 13 July, the Russian Defence Ministry named the sides as “Armed Forces of Armenia and Azerbaijan”. This begs the questions of “Who are in fact in the opposite side fighting against Azerbaijan’s armed forces?” and “Why does Russia not ensure the withdrawal of Armenian armed forces from the region as envisioned by the ceasefire deal?”.

This thorny situation in Karabakh has become even more complicated in recent days by new reports about the illegal travel of trucks belonging to the Islamic Republic of Iran to Karabakh without the permission of the Azerbaijani government.

There had been in fact such reports since the very beginning of 44-Day War about the transfer of trucks even loaded with military equipment through the territories of Iran to the Karabakh region. The Azerbaijani government has long tried to resolve this situation with the Iranian side diplomatically and behind the closed doors. For example, in one of his latest interviews with the local media on 23 July, the Azerbaijani President had for the first time, without naming, voiced his concerns about the travel of trucks from foreign countries to Karabakh saying that they use Armenian number plates attempting to deceive us, but we are seeing what is happening in fact.

However, these attempts of the Azerbaijani government to resolve the problem friendly with the Iranian side have delivered no results. Therefore, the Ministry of Foreign Affairs reacted more firmly to the new reports. On 11 August, on the same day that Azerbaijan’s Defence Ministry warned against the deployment of military units of Armenia to the Karabakh region, the Foreign Ministry invited the Iranian Ambassador to the Ministry and submitted Note Verbal expressing “Dissatisfaction with the recent continuous entry-exit of various vehicles belonging to friendly Islamic Republic of Iran to Karabakh region of Azerbaijan without the permission of official Baku”. The Iranian side has yet to respond to Azerbaijan’s concerns.

What is more, the course of the developments in the post-war peace process between Armenia and Azerbaijan give ominous signs for the possible failure of all peace efforts. The situation in the region at the moment is remarkably similar to that of the August 2020, when Azerbaijan was alarmed by Russia’s military supplies to Armenia via the territories of Iran and other countries and Armenia’s reconnaissance and sabotage activities along the front line. We all know what these developments led to in late September. It is therefore urgent for the international community to take all possible measures to ensure the implementation of the ceasefire accord of 10 November 2020 and bring the sides to the negotiations table.