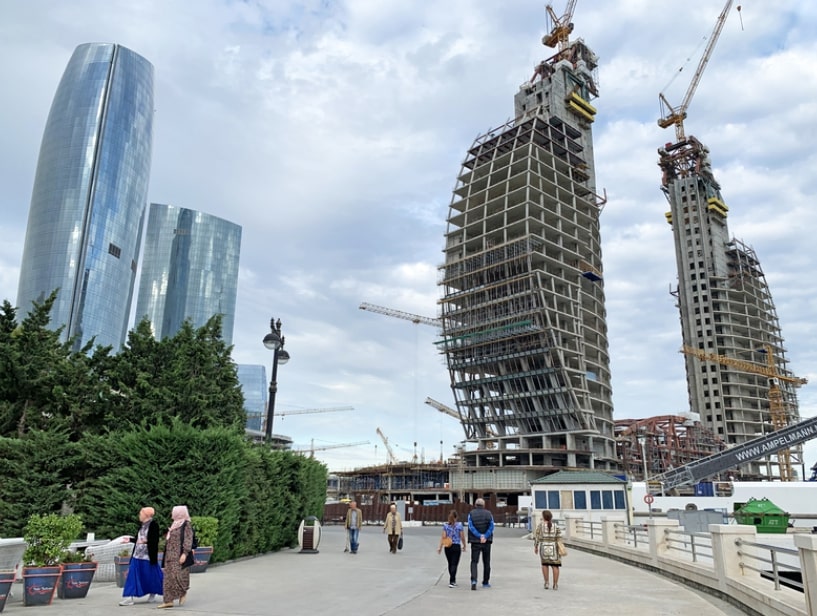 “Azerbaijan’s construction industry, which has declined for three straight years, is likely to rebound in 2021 with 9.1% growth, followed by a steady increase of around 4.4% during the following four years.” (Quote and photo: globalconstructionreview.com)

Scenes from Agdam and other cities in the region are reminiscent of how Mark Twain described the Holy Land upon his visit to the region in the 1800’s. Nagorno-Karabakh has still not environmentally recovered from the abuse that it suffered in recent decades.

However, following Azerbaijan’s victory in the Second Karabakh War, this is beginning to change and this creates great business opportunities for the State of Israel. According to an Azerbaijani source, “Azerbaijanis think highly of the State of Israel and greatly appreciate any assistance that the State of Israel could offer related to environmental management, agriculture, architecture, medicine, education, hi-tech, etc. in the Nagorno-Karabakh region.”

According to a report in the Jamestown Foundation, “Azerbaijan aims to not only rebuild and develop the regions freed from decades-long occupation but also to carry out President Aliyev’s direct instructions to implement “smart city” and “smart village” concepts in these areas. Government plans are thus underway for the portions of Karabakh and the surrounding territories back under Baku’s control to be transformed into a “green energy” zone.”

Israel is a world leader when it comes to environmental sustainability. Although the country is located in an arid desert with scarce water conditions, the Jewish state developed drip irrigation, so that they could still develop high quality crops without using up all of the country’s water resources. Israel is also a world leader in water re-usage, recycling almost 90 percent of its water utilized for wastewater. On top of that, Israel is a world leader in desalination, with some 80 percent of its drinking water being desalinated water.

Considering Israel’s great entrepreneurship in environmental sustainability, the State of Israel is uniquely positioned to help Azerbaijan to rebuild the Nagorno-Karabakh region in an environmentally sustainable manner.

Interestingly, Azerbaijan recently decided to open a trade office in Israel, as the country seeks to strengthen its economic relations with Israel.

Following this development, Israeli Foreign Minister Gabi Ashkenazi declared: “Azerbaijan is an ally, friend, and the largest energy supplier to the State of Israel. We will continue to work to develop the important relations with Azerbaijan and expand them to new areas. Azerbaijan’s recognition of Israel’s vaccination certificate will promote trade and tourism relations between the two countries and help Israel’s economy to continue to recover from the Covid-19 crisis.”

In an interview, Rabbi Zamir Issayev, who heads the Jewish School in Baku, proclaimed: “It was a very good idea to open up a trade office in Israel. The trade relationship between Azerbaijan and Israel is quite big. It is becoming bigger each year, from year to year. It is time to open up Azerbaijani representation in Israel and it would be good to have an Israeli trade office in Azerbaijan. There are many Azerbaijani companies interested in investing in Israel. Everything is going in the direction of opening up an Azerbaijani embassy in Israel.”

Even without the embassy, the relationship between the two countries is very warm,” he added. “There are a lot of countries that have embassies in each other’s countries, but not such a warm relationship. The bridge between Israel and Azerbaijan is the Azerbaijani Jewish community. Also, the strategic interests are clear for everyone. These steps are very positive in bringing about the next phase in the relationship. I think that Israel will think of opening a trade office in Azerbaijan too. It will be wonderful.”

Around the same period of time, Azerbaijan’s President Ilham Aliyev visited the Nagorno-Karabakh region, where he proclaimed that the reconstruction process following the Second Karabakh War has already begun and all friendly countries including Israel are welcome to participate: “I am glad that today a company from Israel, a company from Italy, companies from two friendly countries of Azerbaijan are joining this important project and we have international cooperation.”

“We have companies from Turkey, from China, from Israel, from Italy and all friendly countries,” he stressed. “This is really a good international cooperation. I am sure it’s only the first step. A successful implementation of this project, of course, will allow us to use this experience in other destinations of Karabakh, because we need to restore hundreds of villages, settlements and cities. So, I hope to see you, maybe, in Baku at the opening of this village and also to demonstrate and taste the real Italian mozzarella.”

The rebuilding of the recently liberated Nagorno-Karabakh region presents a golden opportunity for Israeli businesses to further enhance the already wonderful relationship between Jerusalem and Baku.

Thus, I encourage Israeli companies to invest in rebuilding the Nagorno-Karabakh region and making the region livable once again.

Rachel Avraham is a political analyst working at the Safadi Center for International Diplomacy, Research, Public Relations and Human Rights.  She is the author of “Women and Jihad: Debating Palestinian Female Suicide Bombings at the American, Israeli and Arab Media.”