When the Okhchuchay River runs milky white, it means there has been another dangerous incident. The waterway begins in Armenia, passing through lands rich for mining, then flowing into Azerbaijan, where it feeds into one of its main irrigation systems – contaminating the food chain and threatening a fragile ecosystem. 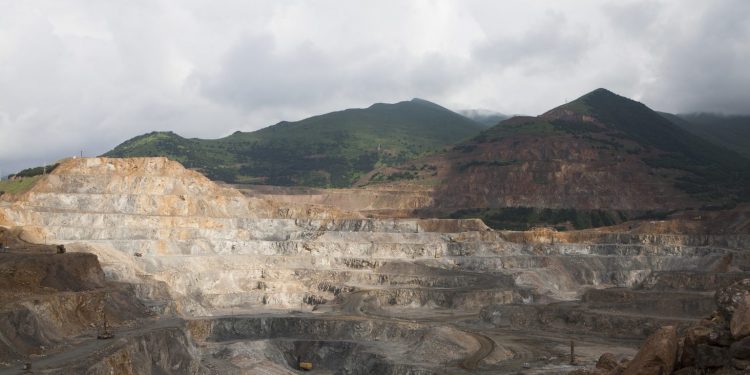 View of of Armenia‘s largest mining operation, the Kajaran Mine operated by the Zangezur Copper and Molybdenum Combine in the town of Kajaran in the southern province of Syunik. Photo credit: Serouj (courtesy of Pan-Armenian Environmental Front) – Own work, CC BY-SA 4.0

Cross-border pollution is becoming an increasingly contentious issue in international law. It’s an especially thorny issue for Azerbaijan and Armenia, which have been enemies for the past 30 years.

In the twilight years of the USSR, Azerbaijan and Armenia went to war – with Armenia eventually occupying one fifth of Azerbaijan’s internationally recognized land. Last autumn, when the two nations again fell into conflict, the situation was reversed when the occupied land was returned to Azerbaijan’s control.

But with these actions, a door to cross-border collaboration on the environment has potentially opened. Ecologists from Azerbaijan have now been able to assess the damage further upstream, taking river-water samples near where the border was supposed to be at independence in 1991.

The findings are alarming. Compared to the norm, the river was over 7 times more toxic in Nickel, 5 in Iron, 4 in Manganese and 3 in Copper-Molydenum compound.

On the other side of the border lies Syunik, a mountainous region rich in mining deposits. It is where the Kajaran mine owned by German group Cronimet – the largest in Armenia – is located. It represents over 60% of Armenia’s mining’s revenue, yet at great cost to ecology and biodiversity in both Armenia and Azerbaijan.

In May 2019, concerns over the Kajaran mine prompted newly elected Armenian Prime Minister Nikol Pashinyan to order an investigation into the operations of 28 mining companies. A further investigation was launched by Armenia’s Environmental Protection and Mining Inspectorate specifically into the Karajan mine’s polluting of the river.

Despite these cases, politics has usually favored the mining companies. The Prime Minister dismissed environmental activists’ grave concerns over a controversial gold mine, saying the impact to groundwater resources would be as small as “washing a car on the beach.” Then last year, his government proposed legislation that would weaken the country’s freedom of information law, to the benefit of mining interests in the country.

When the World Bank conducted a mining-sustainability assessment for the country, it found few of the necessary checks or waste management systems in place to safeguard the environment. At the same time, the Bank called for urgent strategic interventions, but noted the “dearth of experience and knowledge” in Armenia to address mining’s environmental risks. Armenia must look therefore look outside its borders, perhaps even to its neighbor, Azerbaijan.

That would have been unthinkable before last autumn’s conflict. The biggest impediment to any form of cooperation between Armenia and Azerbaijan had been the dispute over Karabakh – the landlocked region in Azerbaijan occupied by Armenia since the collapse of the Soviet Union.

This impediment won’t disappear until there is some form of resolution or negotiated settlement upon the territory. But the return of the disputed lands to Azerbaijani control under an internationally-brokered ceasefire agreement in November – and acceptance of that fact by Armenia’s political establishment – has changed the equation.

Trust between the two nations remains precarious, but collaboration on waterways could be an easy first step toward wider cooperation. First, these problems affect communities in both Azerbaijan and Armenia, and so both have a clear incentive to address it.

Second, the work of depolluting the Okhchuchay River is technical in nature – offering a neutral basis for collaboration. Joint monitoring teams could be established to better identify the polluters to hold them to account. Treatment teams can deployed to respond to further incidents and spills. And a specialist unit could be formed to clean up defunct or abandoned mines that continue to leach pollutants into the water.

And third, Armenia has grown poor with its isolation over the past 30 years. It therefore has few resources to help promote ecological best practice, and little incentive to enforce regulations since mining interests significantly contribute to tax revenues. Azerbaijan – the wealthier nation – could help, given the benefits to its own agriculture downstream.

This kind of ecological collaboration also opens the possibility of Armenian and Azerbaijani citizens actually working together; something that used to be common before 1990, but since unseen. Only then can populations begin to imagine a future where the other is seen as partner, rather than enemy. And what better way to start building trust than improving the thing that they must share – the environment, an issue that must rise above the concerns of nationalism.