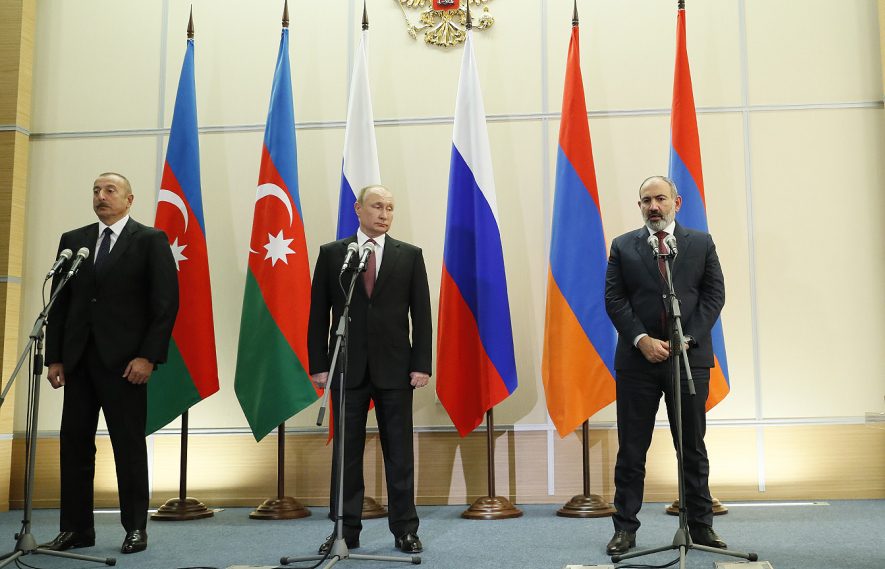 In a rare meeting in the Black Sea resort of Sochi, both Caucasus countries agreed to work towards demarcating the border of the region of Nagorno Karabakh.

In remarks after the meeting, Putin said the three leaders “reached agreement on a whole range of issues” which he considers “key.”

Both Aliyev and Pashinyan echoed Putin’s positive assessment. The Azerbaijani president said the conversation was “open” and “genuine,” and the Armenian prime minister called it “positive.”

Putin also held two separate bilateral meetings with Aliyev and Pashinyan on Friday, before and after the three-way talks.

Armenia and Azerbaijan have been locked in a decades-old dispute over Nagorno-Karabakh, a region that lies within Azerbaijan but was under the control of ethnic Armenian forces backed by Armenia since a separatist war there ended in 1994.

Azerbaijan gained control of a significant part of Nagorno-Karabakh and reclaimed all the regions controlled by Armenian forces outside the separatist region following a deadly flare-up of tensions last year.

Russia has deployed nearly 2,000 peacekeepers for at least five years to monitor the peace deal.

The peace agreement was celebrated as a triumph in Azerbaijan but was seen as a betrayal by the opposition in Armenia. Pashinyan defended it as the only way to prevent the Armenian forces from losing control over the entire Nagorno-Karabakh region.

The 2020 deal envisaged a transport corridor via Armenia that would link Azerbaijan with its exclave of Nakhchivan region. But the plan is resented by the Armenian opposition, which also fears that Armenian interests could be compromised by the planned demarcation of the border.

Opening the meeting with Pashinyan and Aliyev on Friday, Putin said that Armenia, Azerbaijan and Russia “achieved a lot” in a year that passed since the peace deal was signed. There is no large-scale fighting, some 53,000 refugees have returned to their homes, and Russian peacekeepers have been ensuring safety of the Nagorno-Karabakh residents, he said.

In their opening remarks, both Aliyev and Pashinyan said they were prepared to start the work on delimitation and demarcation of the border.

“Our assessment is that Azerbaijani forces have made an incursion into the sovereign territory of Armenia,” he said.

Armenia’s prime minister also said the issue of prisoners of war, hostages and other persons held in captivity remained unresolved.

Aliyev, in turn, said that Azerbaijani authorities have publicly offered to start working out a proper peace treaty with Armenia “to put an end to the confrontation, to recognize each other’s territorial integrity, sovereignty and live as neighbors in the future, (or) learn to live as neighbors all over again.”