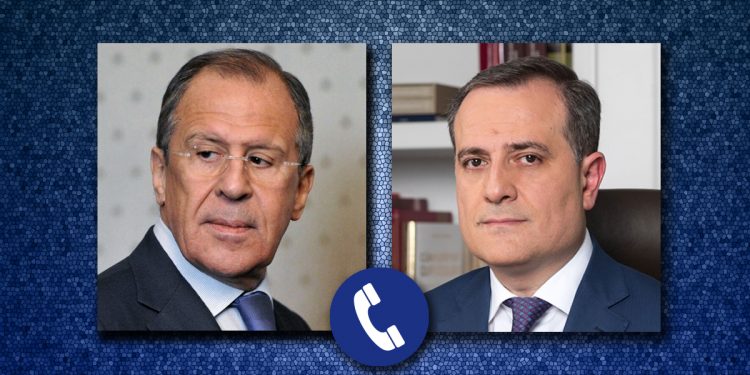 Russian Foreign Minister Sergey Lavrov discussed on Wednesday over the phone with his Azerbaijani counterpart Jeyhun Bayramov the implementation of the agreements reached by the leaders of Russia, Azerbaijan, and Armenia, including on ironing out Nagorno-Karabakh’s humanitarian problems.

The top diplomats touched upon topical issues regarding bilateral relations, regional and international agendas. “A number of topics were discussed amid the implementation of the agreements between the Russian, Azerbaijani and Armenian leaders, concluded on November 9, 2020, and January 11, 2021, in particular, on solving Nagorno-Karabakh’s humanitarian problems. The sides emphasized an important contribution made by the Trilateral Working Group under the joint chairmanship of the Russian, Azerbaijani, and Armenian deputy prime ministers to the region’s post-conflict development,” the Russian Foreign Ministry stated.

Lavrov and Bayramov were glad to note that despite the negative impact of the COVID-19 pandemic, multifaceted Russian-Azerbaijani relations were successfully developing while trade and economic interaction was growing. “This is largely facilitated by the implementation of decisions made during the 19th meeting of the Russian-Azerbaijani intergovernmental commission on economic cooperation as well as the agreements reached during Azerbaijani Prime Minister Ali Asadov’s official visit to Russia,” the Foreign Ministry stated.

The sides also agreed on further contacts between the foreign ministries.