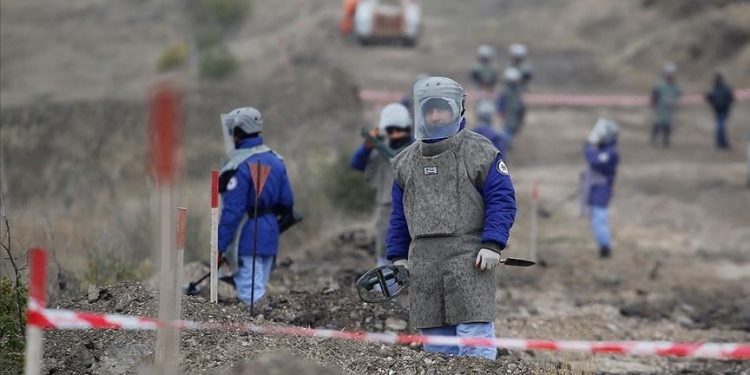 It is a land of forest and mountains which has now become “playground” of innocent people’s unending “miseries”, “disabilities” and “deaths” because of Armenian “Draconian” landmines. Armenian ethnic cleansing and genocide ill spirits are now “haunting” cherish memories of IDPs to resettle in the most liberated areas of KR through planted destructive landmines.

Moreover, Armenian killing machines (landmines) the wondering “black deity” of death are callously chasing every human being for siege and blast in numerous areas of the KR. Ultimately greenery of the KR has been purposely converted into “Red” with full of human bloods. In fact, there have been more landmine accidents per capita in the KR than anywhere else in the world. A quarter of the victims are children.

In this connection, saga continues. Most recently, a landmine explosion in Azerbaijan’s Kalbajar region, west of Nagorno-Karabakh, has now killed two Azerbaijani journalists and an official which has again started a hot debate in SCR. It has rattled the security dynamics of the SCR especially the KR in which the government of Azerbaijan have been striving hard to start a comprehensive resettlement and reconstruction activities since its re-liberation.

According to Azerbaijan officials (June 4, 2021) four others were injured in this incident, which saw an anti-tank mine blow up a truck. The three victims were identified as local official Arif Aliyev, Maharram Ibrahimov, a reporter working for state news agency AzerTag, and Siraj Abishov, a journalist with the state-run AzTV station.

The blast came amid a border dispute between Armenia and Azerbaijan, which fought a six-week war over the Nagorno-Karabakh region last year. Jeyhun Bayramov, Azerbaijan’s foreign minister termed it tragic and called on Armenia to hand over maps locating mined areas.

The Azerbaijani government has repeatedly accused Armenia of refusing to submit such maps. Bayramov Azerbaijan’s foreign minister said denial and refusal of Armenian not sharing the maps of locating landmines have endangered the lives of everyone. Even journalist community of Azerbaijan urged that the reporters should have had access to maps of mined areas and blamed the international community and organisations not force Armenia to provide maps of mined areas. They labeled it as sever violation of international law which showed Armenian state’s annex with terrorism and sabotage activities.

Armenian government and its rough army secretly speeded-up escalations at the various borders of the KR because of complex and complicated socio-economic motives, geopolitical schemes and geostrategic compulsions. Freezing/De-freezing of Armenian soldiers in deep freezers by Armenia has opened a new Pandora box in the ongoing regional rivalry between Azerbaijan and Armenia.

Moreover, serious violations of tripartite agreement among Azerbaijan, Armenia and Russia with Turkey as a trustworthy guarantor are being carried out by Armenia. Azerbaijan has warned Armenia to stay away from any kind of infiltration and captured six Armenian servicemen in Kalbajar.

As usual Armenia denied it and claimed that its forces were carrying out engineering work in the area, while Azerbaijan said the soldiers were part of a reconnaissance and sabotage group. Deteriorating situation has forced Russian to intervene and calmed the divergent tendencies in the SCR.

Chairman of the Board of the Mine Action Agency of the Republic of Azerbaijan (ANAMA) and United Nations Development Program (UNDP) Resident Representative signed new funding to restore community safety in the aftermath of the recent conflict. With USD 1 million from UNDP crisis response and UN’s Central Emergency Response Fund, UNDP will provide support to ANAMA to train, equip and deploy emergency response teams to clear mines and unexploded ordnances which pose grave risks to local communities living in the conflict affected areas.

ANAMA was established with UNDP’s support in 1999. Over the past 20 years, ANAMA and UNDP have helped clear over 806,000 mines and other explosive weapons in Azerbaijan, helping to ensure a safe return home for over 160,500 displaced people.

Government of Azerbaijan has already started a full scale demining operation in the KR which will definitely establish “humanitarian corridors” in the liberated territories. According to ANAMA, humanitarian demining operations have been launched in the liberated territories of Fizuli, Jabrayil, Zangilan, Gubadli, Aghdam, Tartar, Khojavend districts, as well as in Shusha city since November 2020. To date, more than 2,051 hectares of land have been cleared of mines and UXOs. During the operations, 18,648 mines and UXO were found and neutralized. But it shows destructive schemes of Armenia.

Unfortunately, the KR has become “carpets of land mines” because of Armenian inhumane state policy. Besides Soviet era TM-62 anti-tank and PMN-2 anti-personnel mines, the region is also full of more recent unexploded ordinance, munitions and home-made bombs. The demining operation is led by the Azerbaijan National Agency for Mine Action (ANAMA), which now has around 15,000 personnel.

Russia and Turkey being guarantors of the peace agreement are also supporting the mine clearances. Currently, 100 Russian military personnel are using 13 IMP-52 mine detectors and Uran-6 robotic systems in the region. At the same time, 140 personnel from Turkey’s Special Mine Detection and Clearance Teams are using 20 MEMATT mine clearing systems. These are built using Armox-500T, the world’s strongest protection plate against explosions. Azerbaijan was the first country to purchase the MEMATT system, which was produced by the Turkish state company ASFAT and private military contractors.

Critical analysis of the past history reveals that Armenian forces planted mines along the contact line in order to prevent any attempt to retake the occupied lands during its illegal occupation.

Thus, defeating Armenian army installed more mines almost everywhere in order to delay the Azerbaijani army. In the Agdam region, because of the absence of fighting the Armenian occupying forces had thirty days to lay additional mines before they withdrew under the November 2020 ceasefire agreement.

During Armenia’s occupation of the seven districts surrounding Karabakh, much of the area’s infrastructure was completely destroyed. Armenia seriously committed an act of cultural terrorism by physically destroying Azerbaijan’s cultural and religious in the KR. The grave and commemorative complex to famous Azerbaijani poetess Natavan Hurshudbani of nineteenth century in Agdam, was vandalised and partly destroyed.

Government buildings and people cemeteries were completely destroyed. Cemeteries had been dug up, the remains removed and looted of even the smallest item, such as gold teeth in most of the KR which showed inhumane conduct of Armenians against innocent Azerbaijan people.  Moreover, the losing Armenian army planted mines in civilian infrastructure, lamp posts, canals, road junctions, rural and urban paths, courtyard entrances, cemeteries and riverbanks with the aim of preventing a return to normal life which has now become killing machines.

The Armenian forces enacted a dangerous earth policy throughout the occupied areas. These territories subsequently need massive funds and investments for reconstruction and resettlement.

Having ill intentions, Armenia and the Karabakh separatist authorities did not signed the Anti-Personnel Mine Ban Convention (APMBC). Just before the recent war, the HALO Trust complained that the Nagorno-Karabakh authorities had provided it with no assistance in demining and concluded that there was no government strategy to clear the mines.

Armenia is still refusing to provide maps of laid mines during the war. As a result, nobody knows of the exact locations of all the minefields. The Azerbaijan Prosecutor Office (APO) has claimed that all the rules were observed by Baku with regards to cooperation on demining. The office even threatened to inform Interpol of the identities of the Armenian officers “who gave the order for mining” should they be found.

Being prominent regional expert of Azerbaijan & CIS I uphold that Armenian widespread network of landmines have become a serious no-state security threat to peace and stability of the SCR & KR alike. Peace seems to be prey of deadly landmines. It has the potential to sabotage the peace agreement/process in the region.

It encourages more distrust between Armenians and Azerbaijanis. Sharing of locations/maps of landmines would be a significant step towards the normalisation of bilateral relations and the conclusion of a peace agreement ending four decades of conflict.

Since the end of 2nd war of Nagorno Karabakh, Azerbaijan has been striving hard to start reconstruction activities but demining efforts have become the stumbling block. Anti-personal landmines continue to pose a major threat to human life in the liberated territories.

According to APO (May 2021) mine explosions have killed fourteen Azerbaijanis, including five Azerbaijani soldiers, since the November deal. Moreover, fifty-two soldiers and eight civilians have been injured as a result of mine explosions. It is clear that many civilians have been falling victim to anti-personal mines during the post-conflict period.

It seems that a complete mine clearance of the liberated territories is vital achieving peace and stability and sustainable development in KR. It is seriously hurting the settlement of Azerbaijani internally displaced persons (IDPs) and the region’s economic integration process.

On its parts, Azerbaijan is assisting the United Nations and other international organizations to accelerate de-mining activities in the KR. The UN has provided US$2 million to support the emergency humanitarian response in conflict-affected areas of Azerbaijan. With an additional $1 million from United Nations Development Program (UNDP) Crisis Response and the UN’s Central Emergency Response Fund, UNDP will provide support to ANAMA to train, equip, and deploy emergency response teams to clear mines and unexploded bombs that pose risks to local communities living in conflict-affected areas.

The velocity and widespread networking of landmines and other types of unexploded ordnance may take several years to completely clear the territory and, without access to maps of the minefields, demining operations has already become very slow and difficult. I personally think that there is a systematic method in Armenian madness which it desires to use as strategic bargaining with Azerbaijan. It may be some political, economic, or geographical concession.

Principally, Armenia should provide minefield maps to Azerbaijan and to peacekeepers as an indication of its intention for peace. Such action will accelerate demining operations and enhance mutual trust between the parties but it may be hope against hope. Azerbaijan government may form a Trilateral De-mining Forum (TDF) comprising of Azerbaijan, Turkey and Pakistan to clear the landmines in the KR.