On March 26, the Ministry of Defense of Azerbaijan called on the Russian side to complete the withdrawal of “the remnants of the Armenian army and illegal Armenian armed detachments” from the Azerbaijani territories temporarily under the control of Moscow’s peacekeeping mission. 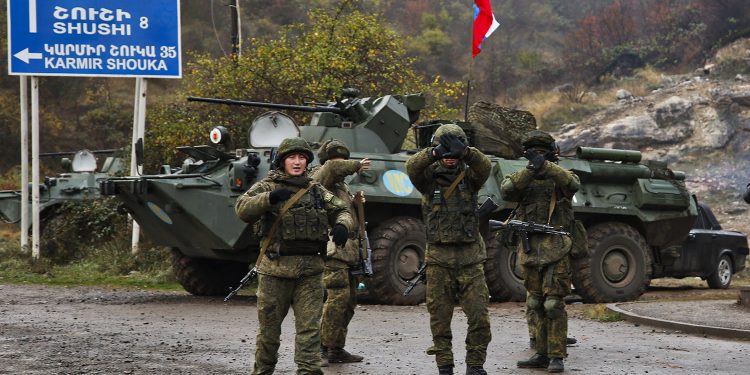 As Azerbaijan has always contended, the fourth article of the trilateral (Armenia, Azerbaijan, Russia) agreement that ended the Second Karabakh War (September 27–November 10, 2020) unequivocally mandates the withdrawal of Armenian military forces from the region in parallel with the deployment of peacekeeping units (President.az, November 10, 2020). This was at least the second instance since the war’s end that the Azerbaijani defense ministry had publicly appealed to Moscow to ensure the full implementation of this article (see EDM September 22, 2021). This time, however, the appeal occurred against a background of intense political and geopolitical significance.

The security situation between Armenia and Azerbaijan along their shared state border, as well as in Azerbaijan’s Karabakh region, has been strained since the beginning of March, amidst the ongoing full-scale Russian-Ukrainian war (see EDM, March 16, 2022). Baku reported increasing numbers of provocations by the Armenian armed detachments while Russia has been distracted by the fierce conflict in Ukraine. Azerbaijani media published video evidence of the pullout of part of Russia’s military equipment from the Azerbaijani territories, where Russian peacekeepers are deployed (Caliber.az, March 27). The withdrawn equipment was allegedly transferred to Ukraine.

Against this backdrop, the clashes between Armenia and Azerbaijan—which in early March were mostly confined to areas along the interstate border—have now slowly been shifting to the region under the control of the Russian peacekeeping mission. The situation escalated further in mid-March, when Armenia blamed Azerbaijan for an explosion (March 7–8) involving the natural gas pipeline from Armenia proper to the Armenian-populated areas in Karabakh, which passes through the vicinity of Azerbaijani-controlled Shusha. Heavy snowfall in the region during this period aggravated the consequences of the explosion for local residents. According to Yerevan, Azerbaijan was “responsible” for the explosion that occurred in the Azerbaijani-controlled area (Armenpress.am, March 24). The Azerbaijani Ministry of Foreign Affairs denied the charge and accused Armenia of exploiting “technical problems in gas pipelines due to severe weather in the region as a tool for political manipulation” (Twitter.com/LAbdullayevaMFA, March 25).

Meanwhile, clashes between Azerbaijan’s Armed Forces and the Armenian armed units in the Karabakh region have continued to multiply. On March 24, the local separatist regime accused the Azerbaijani side of violating the ceasefire regime and entering the village of Farrux (Khojaly district), which is inside the zone temporarily under the control of Russia’s peacekeepers (Armenpress.am, March 24). The next day, Yerevan claimed that three of its soldiers were killed in an Azerbaijani military operation involving Bayraktar TB-2 combat drones (Armenpress.am, March 25). In turn, the local separatist forces in Karabakh, which had previously declared support for Russia’s war against Ukraine, appealed to Russian President Vladimir Putin to deploy more peacekeepers and special equipment to their region (Arka.am, March 26). 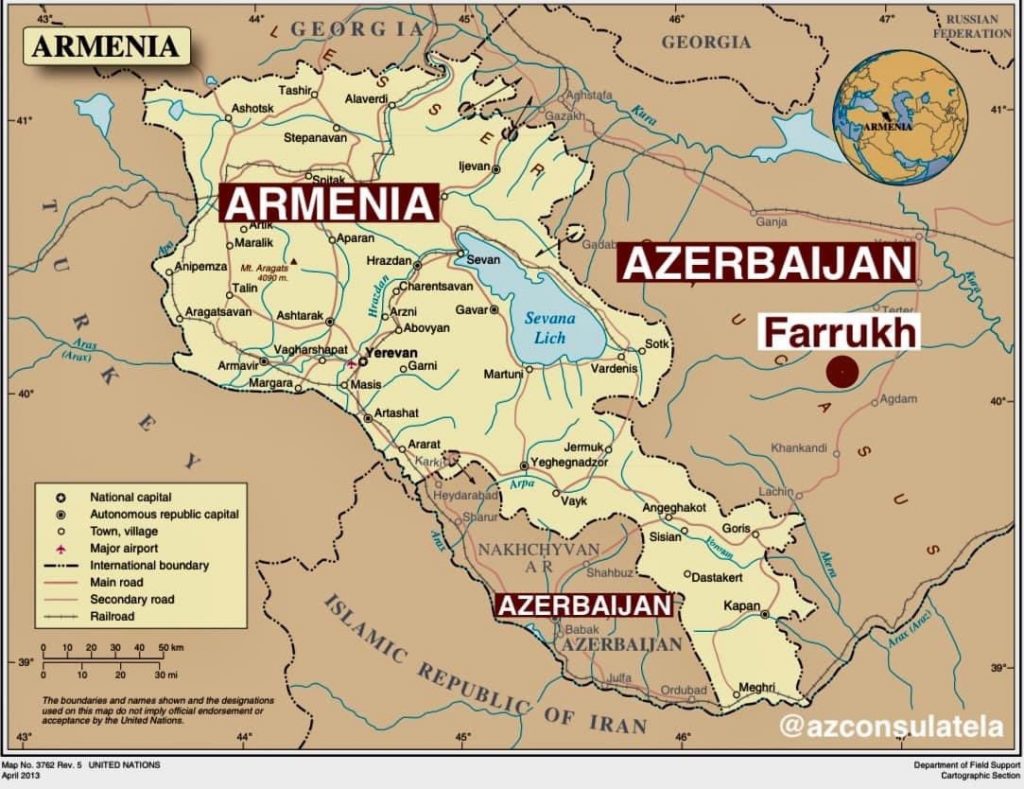 On the evening of March 26, the Russian Ministry of Defense announced violations of the terms of the trilateral November 9, 2020, accord and, for the second time since the last such incident in August 2021, accused the Azerbaijani side of an incursion into the zone of responsibility of the Russian peacekeeping contingent (Mil.ru, March 26). The Russian Ministry called upon Azerbaijan to withdraw its troops to their initial positions—a call that was echoed by the other co-chairing countries of the Organization for Security and Cooperation in Europe’s (OSCE) Minsk Group, France and the United States, in a rare show of unity with Russia (Diplomatie.gouv.fr, State.gov, March 25).

Baku holds to the fact that the area in question is part of the internationally recognized territory of Azerbaijan and the Armenian armed detachments in the region remain there in violation of the aforementioned trilateral agreement. Therefore, the Azerbaijani government harshly rebuked the calls by Moscow and the other Minsk Group co-chairs for the withdrawal of Azerbaijani troops from the village of Farrux (Mfa.gov.az, March 26).

Azerbaijan’s defense ministry, on March 26, expressed regrets “regarding the one-sided statement of the Ministry of Defense of the Russian Federation” and countered the charges, saying that “members of [the] illegal Armenian armed detachments attempted to sabotage the Azerbaijan Army Units” but were forced to retreat thanks to immediate actions by the Azerbaijani side. Baku reiterated its earlier calls to Moscow to stop referring to the region by the name “Nagorno-Karabakh.” “There is no administrative and territorial unit called “Nagorno-Karabakh” in the territory of Azerbaijan,” the defense ministry protested (Mod.gov.az, March 26).

This controversy between the ministries of defense of Azerbaijan and Russia further increased on March 27, after the Russian side announced that the Azerbaijani troops withdrew from Farrux “as a result of negotiations” (Mil.ru, March 27). Countering this statement, the Azerbaijani defense ministry immediately reacted and declared that its positions in Farrux and surrounding heights have not changed. The Azerbaijani Ministry again accused Russia of disrespecting the territorial integrity of Azerbaijan by continuing to call the region “Nagorno-Karabakh” (Mod.gov.az, March 27). In fact, Yerevan also disputed the Russian defense ministry statement: the Armenian Ministry of Foreign Affairs noted that Moscow’s assertion does not reflect the situation on the ground and that Farrux remains under Azerbaijani control (Armenpress.am, March 28).

In response to the Farrux village controversy—and quite contrary to the spirit of the recently signed Azerbaijani-Russian declaration on allied cooperation (see EDM, February 25)—Russian State Duma (lower chamber of parliament) deputy Mikhail Delyagin appeared on television and threatened Azerbaijan with “harsh and unequivocal punishment” if the country disobeys Moscow’s demands and sides more closely “with Turkey, an ally of the United States” (YouTube, March 29). On Telegram, Delyagin asked his followers whether they thought Russia should attack Baku’s oil industry infrastructure with nuclear weapons in response to Azerbaijani “aggression” in Karabakh (Twitter.com/visegrad24, March 29).

While Russian peacekeepers reported that the situation in Karabakh had stabilized by March 28 (Mil.ru, March 28), the Armenian government continued to warn that conditions were “extremely tense” (Armenpress.am, March 28). Azerbaijan remains on alert for more Armenian provocations. According to Dr. Farid Shafiyev, who chairs the Baku-based Center of Analysis of International Relations, the full implementation of the November 9, 2020, trilateral accord is the only way to assuredly prevent new escalations in the region (Author’s interview, March 28). In turn, Armenia’s and Russia’s unwillingness or inability to ensure the withdrawal of the Armenian armed groups from Karabakh undermines the larger peace process and jeopardizes regional stability.