A group of supporters of the PKK terror group attacked a member of the public during a demonstration in London on Saturday. 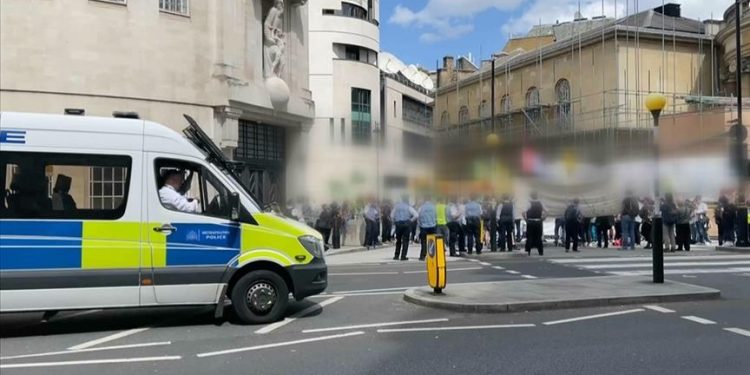 The attack targeted an Azerbaijani man who was walking down the street near the tourist hub Picadilly Circus.

The assailants, a group of men and women, punched the man on the chin and continued to physically assault him before the police took him into a shop for protection.

The man told Anadolu Agency that he is originally from Azerbaijan but works in London.

He said he “saw the anti-Turkish meeting and I could not take it,” explaining that the group members “were making the Victory sign.”

He said he made the grey wolf sign – a sign symbolizing patriotism commonly used in Turkic countries such as Türkiye and Azerbaijan.

“Men and women, they attacked me. They punched my chin. Then police protected me in a shop.”

He added that the police stopped the PKK supporters’ further attacks but he did not know if anyone was arrested over the incident.

The group of PKK supporters gathered in front of BBC headquarters earlier on Saturday and marched to Downing Street via central London.

They carried symbols and banners of the terror organization PKK/YPG and its Iranian branch the PJAK as well as photos of the group’s jailed ringleader, Abdullah Ocalan.

British police were observed to have walked alongside the marchers, a common practice in PKK demonstrations.

PKK demonstrations are not barred by British security forces despite it being a banned terrorist organization in the UK.

The UK’s Supreme Court last January upheld a ruling against a man who carried the terrorist organization’s flag in a similar protest in 2018.

In its more than 35-year terror campaign against Türkiye, the PKK – listed as a terrorist organization by Türkiye, the US, and EU – has been responsible for the deaths of over 40,000 people.

Türkiye has recently decried demonstrations and attacks by the terrorist group PKK in a number of European countries, including the UK, Germany, France, and Switzerland.