The Azerbaijani authorities held a groundbreaking ceremony on July 1 for the planned Alat Free Economic Zone (AFEZ), which will be linked to the new Baku International Seaport also under construction near the village of Alat, around 50 miles south of the capital of Baku. 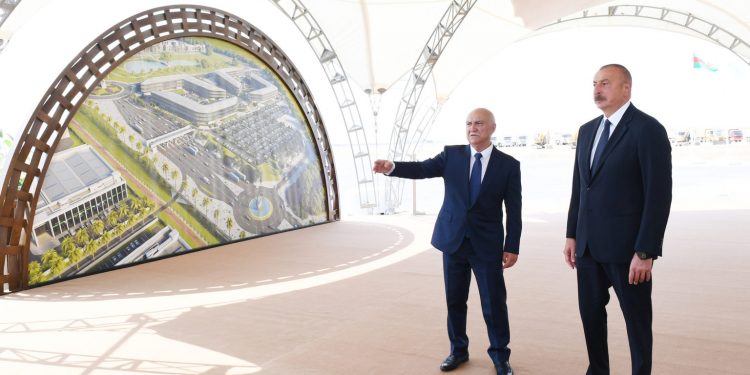 Less than a week later, Azerbaijan’s president signed an executive order defining the legal regime for the AFEZ (Azertag, July 9). Work on creating a special institutional and legal basis for the AFEZ has accelerated since 2018. The government’s goal is to build one of the largest (total area 850 hectares) such free economic zones in the Caspian Sea region in order to support high value-added and export-oriented production as well as attract investors to Azerbaijan that will provide innovative technology services and contribute to the dynamic and sustainable development of the country’s economy. The success of Alat may stimulate the creation of other such zones in Azerbaijan, including perhaps in cities or towns on the border with Iran, Russia and Georgia (Sia.az, July 2).

The associated infrastructure construction costs at Alat will be relatively low. Major east-west and north-south trans-Eurasian transportation corridors already intersect in this location, and the International Baku Seaport is located there as well. Furthermore, there is a 300-megawatt power plant in nearby Sangachal. At the same time, the AFEZ is unlikely to face significant competition from preexisting free economic zones in other countries in the region. Several such zones exist within a radius of 1,000 kilometers; but many of them have not shown significant success or are located quite far away. And while Iran has more such economic zones in comparison to other regional countries, United States sanctions and tensions with the West have reduced the competitiveness of these ports. On the opposite shore of the Caspian Sea, the Kazakhstani free economic zones in Aktau and Atyrau have been in operation since 2002, but their current activities are limited; and in fact, they seem to be complementary to the AFEZ, not its competitors (Jp-kz.org, accessed July 23).

The target sectors envisioned for the AFEZ fall into four main categories, which will be developed in roughly sequential order. The first is the transport and logistics sector, since the creation of such infrastructure is a key prerequisite for enabling exports from other industrial sectors. The second major category is value-added services, which will enhance the economic worth of such transit flows. The third area of development will be the light industry sector, with an eye toward producing goods for the regional export market. Finally, the fourth category will be composed of sectors related to the crucial oil and natural gas industry.

With respect to the competitiveness and future prospects of the AFEZ, Azerbaijan enjoys two fundamental advantages. First of all, Azerbaijan is located in a particularly favorable geographical position—adjacent to Russia, Turkey, Iran and the Central Asian region, all of which have large internal markets. The total size of the economies of these countries exceeds $3 trillion dollars, creating a significant opportunity for the export-oriented AFEZ. The second strength is the location of the country at the crossroads of east-west and north-south international cargo flows. Sitting along one of the main branches of the modern “Silk Road” between China and Europe has allowed Azerbaijan to position itself as the largest transit hub within its immediate region (see EDM, November 6, 2018).

The location of the AFEZ at that intersection of north-south and east-west international transport corridors creates rich economic potential for the associated new Baku port, which is offering efficient, fast transit for cargo crossing the Caspian Sea. Indeed, Azerbaijan is seeking to develop an extensive logistics chain in Alat along the northern, southern, eastern and western directions that will cover land, water and air transit. One of the other most important ongoing projects in this regard is the development of the Rasht–Astara railway, between Iran and Azerbaijan. This north-south corridor along the Caspian coast is expected to increase trade turnover not only between these two states but further afield because the railroad is part of the transcontinental International North-South Transport Corridor (NSTC), which extends from India to Europe (Ady.az, January 15, 2021). Rail has already been laid down from Azerbaijan’s Astara station to the Iranian city of Astara across the border. What remains is for Iran to complete the construction of the railway from the coastal city of Anzali to Rasht (APA, December 14, 2020). Furthermore, the shortest and most reliable route connecting Europe with Asia across the South Caucasus is the Baku–Tbilisi–Kars Railway, which has been operational since 2017 (President.az, October 30, 2017).

At the same time, Azerbaijan expects Armenia to adhere to the trilateral (negotiated and also signed by the Russian side) ceasefire accord from November 9, 2020, which, in part, mandates that Yerevan provide proper conditions to reinstate travel east-west via Syunik Province—referred to by Azerbaijan as the Zangezur corridor (see EDM, April 5, 13, 21, May 24, 2021). Thus, when both the final railway segment of the INSTC and the Zangezur corridor are ready, the countries of the Gulf, Southeast and Central Asia, and the Caucasus will all be connected to Europe via Azerbaijan. In turn, the opportunities inherent in these new international and regional transport and logistics corridors will give major impetus to the further development of the AFEZ.

Previous successful strategic infrastructure projects in Azerbaijan, along with the prospective for the realization of the Zangezur corridor, are attracting Europeans’ attention to the AFEZ, including high-ranking officials from the European Union. Not coincidentally, during his recent tour of the region, European Commissioner for Enlargement Olivér Várhelyi specifically visited the site of Alat’s future free economic zone (Oxu.az, July 22).

Much work certainly remains for Baku to ensure that the AFEZ is a success. But its development and place within Azerbaijan’s broader geo-economic strategy can only be understood by fitting it together with the country’s already-realized trans-regional transit and logistics projects.