The crash of the State Border Service helicopter: expert opinion

The news of the crash of a military helicopter belonging to the State Border Service of Azerbaijan and the resulting death of 14 and injury of 2 SBS officers shocked the Azerbaijani public. 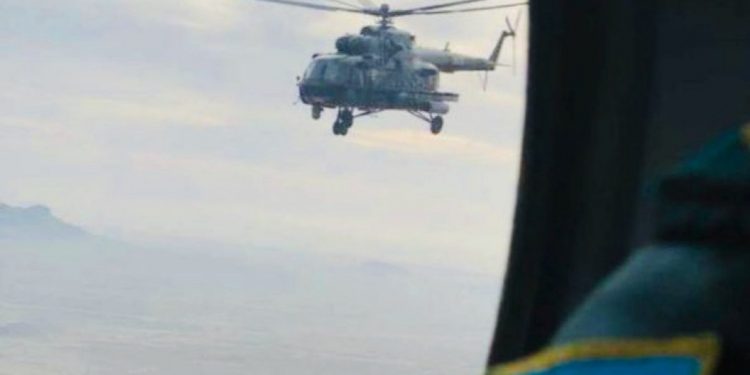 On the other hand, wasting no time waiting for the results of the official investigation, some conspiracy theorists began to flood the social media with most ridiculous versions of the causes behind the disaster, including the “trail of foreign secret services”. However, according to the Chief of the State Border Service Colonel-General Elchin Guliyev, the helicopter took off from the Sangachal airfield to participate in training exercises and crashed while landing at the Garaheybat training center.

In the meantime, Caliber.Az sources say that according to the preliminary version, the SBS helicopter crashed on final approach from a height of 150 meters due to poor weather conditions.

Unfortunately, helicopters crash all over the world quite often, advances in technology, including in aviation, and the tightening of flight safety rules notwithstanding. Military helicopters go down as well. Poor weather conditions are one of the main causes of these disasters.

Accidents involving helicopters in other countries

Here is a selection of some of the helicopter crashes that have occurred in the neighboring countries in recent years.

On August 12, 2021, a Mi-8 helicopter crashed in the Kamchatka Krai of the Russian Federation, killing 8 out of the 16 people on board.

On March 4, 2021, a military Eurocopter AS532 Cougar helicopter of the Turkish Air Force crashed in Bitlis Province, killing 11 Turkish servicemen. According to preliminary information, the accident could have been caused by a technical malfunction and poor weather conditions.

On August 4, 2018, a Mi-8AMT helicopter of UTair Helicopter Services crashed in the Krasnoyarsk Krai. Three crew members and 15 passengers were killed in the accident.

On April 11, 2018, a Mi-8 helicopter of Vostok airline crashed in a vacant lot in Khabarovsk and caught fire after hitting a broadcast mast in low visibility conditions. All six people on board the helicopter were killed.

On March 7, 2018, a Mi-8 helicopter belonging to the FSB Border Service crashed in Chechnya. While preparing to land in a mountainous area, the helicopter’s rotor clipped a mountainside, turned over and fell into a ravine. There were seven people on board. Six of them were killed, one survivor was evacuated from the crash site with serious injuries.

There have been over 30 accidents and crashes of Mi-8 helicopters in Russia alone from 2018 to 2021.

This is only a small selection of helicopter crashes, but it clearly demonstrates that such tragic events are, sadly, by no means uncommon in both civil and military helicopter aviation.

According to Vakhtang Maisaia, Georgian military expert, Doctor of Political and Military Sciences, there is more than one possible cause behind the accident.

“First of all, there is the human factor, so to speak, the pilots factor. Then there are climate conditions, especially foggy and windy weather, for example, if they failed to warm up the propellers in time. Then there are possible technical malfunctions of this particular helicopter, its service life, and so on. In any case, the investigation will make the final conclusion.

“On my part, I would like to extend my deepest condolences to the Azerbaijani people for the crash of the helicopter of the State Border Service and the death of the officers,” V. Maisaia said.

Ukrainian military expert Alexey Arestovich: “Flying in the mountains, especially this time of year, in late fall, with its fogs and abrupt changes of weather, is very dangerous as it is. Even outside of combat situations and the possibility of sabotage, there are many things that can cause a crash, from the weather to technical factors. Helicopters crash for many reasons, but they all fit into 5 main groups: technical malfunction, pilot error, sabotage, weather conditions, fire from the ground, or a combination of the above. I think that the investigation will establish the real cause. But a helicopter crashing on final approach is a complicated story, there must have been a very serious technical malfunction.”

Ukrainian military expert Oleg Zhdanov: “There are two possible causes of the crash. The first is a pilot error. The second is a technical malfunction. A pilot error could be caused either by the full load of the helicopter, 14 people on board plus the crew, or by weather conditions. A technical malfunction could be caused by the age of the helicopter itself. Metal fatigue could have come into play leading to a critical breakdown during the flight. There is also a possibility of sabotage, if someone intentionally disabled the helicopter’s control system. But only an expert examination and decoding of the black boxes can give the conclusive answer.”

“Mi-8, much less Mi-8MT, is unique and meets many requirements. This is a reliable, good aircraft. But a strong side wind can pose a danger to the helicopter, and even then, while landing. The following factors can also cause a crash of a Mi-8: a global failure of the hydraulic system, when all controls are jammed, or a failure of two engines, or engine fire. There is also the human factor, but I personally do not believe in the crew’s error. There were experienced pilots on board, one of them my friend, one of my most talented students, Colonel Fizuli Javadov.

“If a foreign body, such as a large bird, is pulled into the engine, a compressor stall occurs and the aircraft may crash. Perhaps there was an engine failure, the guys started to land the helicopter and could not turn it in time in a strong crosswind. Maybe there was an emergency on board, the pilots made the decision to make an emergency landing and were physically unable to turn the aircraft in a strong crosswind or tailwind. No matter how great of a pilot you may be, it is very, very difficult to land an aircraft with a failed engine in a strong wind,” A. Shvarev said.

He also drew attention to the fact that, as far as he remembered, so many experienced officers had been in the same helicopter at the same time only once before, in November 1991.

“On November 20, 1991, a helicopter carrying high-level Azerbaijani government officials crashed in the sky over Garakend. But it was because it was shot down by the Armenians. This is why I’m not sure I understand why so many experienced officers were in the same helicopter at the same time.”

Of course, one can appreciate that some people under stress of emotions fall for different theories of the crash of the State Border Service helicopter. Still, we believe it is important to wait for the results of the investigation, especially since a criminal case has already been opened, and its progress is under special scrutiny of the country’s leadership and law enforcement agencies.