The Karabakh issue: An internal matter for Azerbaijan

'Karabakh Armenians are citizens of Azerbaijan. The constitution of Azerbaijan and its international obligations guarantee the security and rights of the Armenians living in Karabakh'. 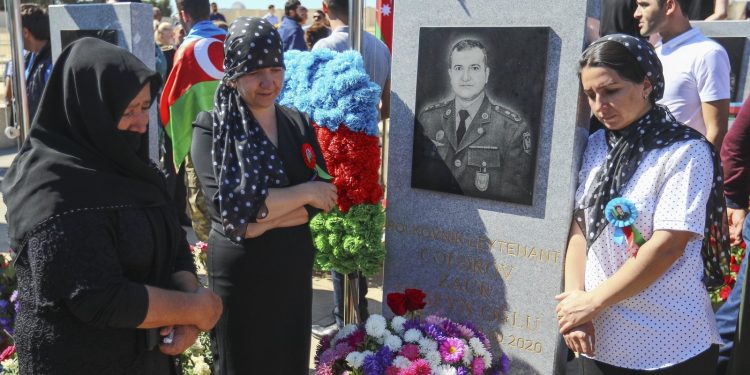 Relatives mourn near the grave of an Azerbaijani soldier at a military cemetery housing the graves of soldiers who died during the Second Karabakh War, outside Baku, Azerbaijan, Sept. 27, 2021. (AP Photo)

Parallel to the discussions on the terms of the Azerbaijan-Armenia peace agreement, negotiations are continuing on certain issues. One of the issues being negotiated is the integration of Armenians living in the Karabakh economic region into Azerbaijan.

Having occupied this region for many years, Armenia was defeated after 44 days of war and a new reality has now emerged. Azerbaijan insists that it will not negotiate with any state about the future of Karabakh Armenians, considering the issue an internal matter. Both the laws of the Soviet era and the decisions of international organizations support the stance of Azerbaijan.

The former Nagorno-Karabakh Autonomous Oblast (NKAO), which was given autonomous status in 1923 and remained an autonomous Azerbaijani region during the Soviet era, was not given the right to secede in any Soviet constitution and important decisions about the region were made by Baku. According to successive constitutions by the USSR and Azerbaijan Soviet Socialist Republic (SSR) (1924, 1927, 1936, 1937, 1977 and 1978), the central government of Azerbaijan ruled on the important political issues concerning the NKAO. From 1988 to 1991, Karabakh Armenians and the Armenian parliament adopted a number of resolutions to do with secession, but all the decisions are considered unlawful according to the Azerbaijani constitution, contemporary Soviet legislation and international law.

On Nov. 26, 1991, a month before the collapse of the Soviet Union, the Azerbaijani parliament abolished the autonomy of the NKAO. After Armenia’s occupation of Azerbaijani lands, two of the four resolutions (Resolution 853, Article 9 and Resolution 884, Article 2) adopted by the U.N. Security Council in 1993 clarified the status of Karabakh Armenians as Azerbaijani citizens.

The status of Karabakh was not mentioned in the Nov. 10 tripartite declaration signed by Armenia after the military operation initiated by the Azerbaijani army in 2020 within the framework of Article 51 of the U.N. Charter. Azerbaijani President Ilham Aliyev later declared that, when the tripartite declaration was signed in November 2020, Armenia promised not to bring the status of Karabakh onto the agenda. On July 7, 2021, by decree of President Aliyev, the Karabakh economic zone was established in place of the former NKAO, which had been abolished in 1991, and Baku appointed a special representative and governor to this region.

In the post-war period, in negotiations mediated first by Russia and then by the European Union, there was no clause regarding the granting of special status to Armenians living in Karabakh. After the 2020 war, Russian President Vladimir Putin stated that Karabakh is the internationally recognized territory of Azerbaijan and, in the agreement signed between Russia and Azerbaijan on Feb. 22, 2022, Russia recognized the territorial integrity and sovereignty of Azerbaijan. According to the strategic cooperation agreement signed between Azerbaijan and the EU in the field of energy in July 2022, the EU also recognized the territorial integrity of Azerbaijan. In an interview with Public Television on Sept. 30, Armenian Prime Minister Nikol Pashinian said that none of the aforementioned international structures and countries are ready to recognize Karabakh’s independence or recognize Karabakh as part of Armenia. He clarified that these countries had made statements to the effect that Karabakh was, in fact, part of Azerbaijan from an international point of view. According to allegations in the Armenian press, the Pashinian administration gave the separatists a message not to trust Armenia or Russia during their last visit.

The fact that the Karabakh issue is not included in the peace agreement to be signed between the parties stems from the fact that Azerbaijan views the issue as an internal one. After the Prague meeting, President Aliyev said that the Armenians of Karabakh are citizens of Azerbaijan: “We decide when to talk to them. This is our internal matter. We will not discuss this with any country. Armenians living in Karabakh will have neither status nor independence. They will have the same rights as the citizens of Azerbaijan.”

In fact, Azerbaijan has been meeting with Karabakh Armenians for some time. In one of his previous statements, President Aliyev confirmed that some Azerbaijanis had met with the Armenians of Karabakh. It is now known that there were discussions between Karabakh Armenians and Azerbaijani representatives during three different periods in particular. During the evacuation of Lachin, a meeting was held with Karabakh Armenians without a mediator, and a further meeting was held concerning the use of the resources of the Sarsang dam. As President Aliyev mentioned, at the same time, Armenians living in Karabakh asked Azerbaijan to build a 4-kilometer (2.4-mile) road in Azerbaijan to connect to the Armenian border. Some Armenian families wanted to pass from Khankendi to Shusha, but the Russian peacekeeping troops did not allow them. On the other hand, the separatist “government” of Karabakh started an investigation into those who wanted to integrate with Azerbaijan and announced that they would be treated as traitors and arrested to prevent the integration process.

Thousands of Armenians and other minorities have been living in the rest of Azerbaijan for 30 years. At that time, no minority population was oppressed or discriminated against because of its ethnic status. There are representatives of other ethnic peoples in the Azerbaijani parliament. During the Second Karabakh War, these people fought for the territorial integrity and sovereignty of Azerbaijan and some were martyred. This was because they see Azerbaijan as their homeland and Azerbaijan as their home.

The rights and security of Armenians in Azerbaijan are regulated by the country’s constitution. According to Article 25 of the Constitution of Azerbaijan, the state shall guarantee equality of rights and freedoms to everyone, irrespective of race, ethnicity, religion, language, sex, origin, property status, occupation, beliefs, or affiliation with political parties, trade unions or other public associations. Restrictions on rights and freedoms on the grounds of race, ethnicity, religion, language, sex, origin, beliefs, or political or social affiliation are prohibited.

To sum up, Karabakh Armenians are citizens of Azerbaijan. The constitution of Azerbaijan and its international obligations guarantee the security and rights of the Armenians living in Karabakh. On the other hand, the Armenian civilians, who have been under the influence of the radical ideology and propaganda of Armenian organizations and the junta regime in Karabakh for many years, need to be integrated into Azerbaijan – legally, politically and economically.