The week of Azerbaijani Diaspora in Europe

In the past few days, the delegation of the State Committee on Work with the Diaspora led by Chairman Fuad Muradov held a series of meetings with the Diaspora organizations and Azerbaijani communities in Europe. 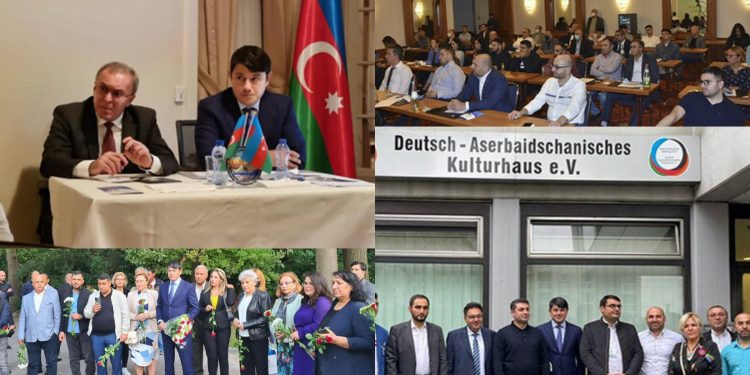 On August 27, 2021, the delegation met with the Azerbaijani community in Belgium at the Azerbaijan House in Brussels. The event was also attended by Ambassador Extraordinary and Plenipotentiary of Azerbaijan to Belgium Vagif Sadigov, representatives of the Coordination Council of Azerbaijanis of the Netherlands and Belgium.

Fuad Muradov spoke extensively about the construction work in the liberated territories of Azerbaijan and applauded the activities of the Azerbaijani Diaspora during the 44-day war. He also gave detailed information about the diaspora-related policy of the Azerbaijani state, the projects implemented by the Committee to organize the diaspora, the establishment of Coordination Councils, Azerbaijan Houses, the work to be done and goals lying ahead. He shared his recommendations and suggestions with the participants of the meeting, especially focusing on the young people—the future of the Diaspora.

Then a video on the activities of the Committee during the Second Karabakh War was demonstrated, and a presentation was made on the work carried out by the Committee in recent years, including visits to Shusha.

Speaking about the Belgian-Azerbaijani relations, Ambassador Vagif Sadigov pointed out that our compatriots are well integrated into the local society. The diplomat praised the work done by the Committee in this area and stressed that the goals set by the Diaspora should be chosen in accordance with the changing realities of the world, and our compatriots, especially our youth, the driving force of society, have a great responsibility to achieve these goals. Young Azerbaijanis of Europe should be closely involved in strengthening international relations and can contribute to raising awareness through their activities. Our compatriots living in Europe should be proactive in the cooperation with international organizations and agencies—the importance of this work cannot be overemphasized.

Later that day, the delegation of the State Committee for Work with the Diaspora had meetings at the Benelux Azerbaijanis Congress (BAC) in Rotterdam, Netherlands, and the Dutch-Azerbaijani Turkish Cultural Association in the Hague.

Opening the meeting with the Benelux Azerbaijanis Congress, Chairman of the State Committee on Work with the Diaspora spoke about the work being carried out in Karabakh under the leadership of President of Azerbaijan Ilham Aliyev. Fuad Muradov noted that our compatriots living abroad and our Diaspora organizations had been especially active in getting the truth about Azerbaijan across to the world community during the pandemic, the Tovuz provocations of July 2020 and the Patriotic War. He thanked BAC for the selfless work and highly praised the past, ongoing and future projects, the work of Coordination Councils, Azerbaijan Houses, and spoke in detail about the activities of the “Karabakh” weekend Azerbaijani schools, “Karabakh” sports clubs and “Karabakh” dance groups opened on the initiative of the First Vice President of Azerbaijan Mehriban Aliyeva.

The Chairman of BAC Elsevar Mammadov told the audience about the activities of the organization. According to him, the projects implemented by the Committee are highly effective in acquainting Diaspora members with their historical homeland, and Diaspora TV, Dispor FM radio and diaspor.gov.az provide wide and prompt coverage of the activities of Diaspora organizations.

Then a video about the activities of the BAC was demonstrated, and members of the organization spoke as well, expressing, among other things, gratitude to the government of Azerbaijan for awarding Diaspora activists in the Netherlands with medals and letters of appreciation for their services to the Diaspora.

At the meeting at the Dutch-Azerbaijani Turkish Cultural Association, Chairman of the Committee gave a high assessment of the projects implemented by the association, cooperation with the Turkish Diaspora, the prompt response to the provocations of anti-Azerbaijani forces against our country, and spoke about the importance of the Azerbaijani community being proactive in the socio-political life of the Netherlands, establishing relations with the groups and the media that have the power to influence public opinion.

As was pointed out at both meetings, the Azerbaijani Diaspora faces new challenges and it is essential that our young people living abroad should be brought up in the spirit of high patriotism, upholding these values that unite us.

On August 30, 2021, the State Committee on Work with the Diaspora held a meeting with members of the Coordination Council of Azerbaijanis of the Netherlands-Belgium in the Hague.

The meeting was also attended by Ambassador Extraordinary and Plenipotentiary of Azerbaijan to the Kingdom of the Netherlands Fikret Akhundov and diaspora activists living in the Netherlands and Belgium.

Chairman of the State Committee on Work with the Diaspora stressed the importance of the activities of the Coordination Councils in streamlining the work of the Diaspora, sharing his recommendations and suggestions for making our Diaspora a strong force in European countries, for closer integration into socio-political and humanitarian spheres.

During his speech, Ambassador Extraordinary and Plenipotentiary of Azerbaijan to the Kingdom of the Netherlands Fikret Akhundov reviewed the activities of the Diaspora organizations and the Azerbaijani community, and called on our compatriots to be proactive in raising awareness about our country.

While in the Hague, the delegation, accompanied by members of the Coordination Council of Azerbaijanis of the Netherlands and Belgium, visited the Khojaly monument commemorating the victims of the Khojaly genocide at the Nieuw Eykenduynen cemetery in The Hague.

The visitors laid flowers at the memorial, which depicts a mother raising her baby over her head to protect it from Armenian occupants, and observed a minute of silence in memory of the victims of the massacre.

Yasin Zeynalli, a member of the Dutch-Azerbaijani Turkish Cultural Association, reminded those present that the monument had been installed on February 24, 2008 at the initiative of the Dutch-Azerbaijani Turkish Cultural Association. In 2020, the monument was moved, as the previous location was too small for large gatherings, and our compatriots living in the Hague gather in front of this monument on February 26 every year to pay tribute to the memory of the victims of the Armenian aggression and bring the realities of Khojaly to the attention of the local and world community.

As part of their trip to Germany, the delegation of the State Committee on Work with the Diaspora visited the Azerbaijan House in Cologne and Pantera GYM on August 30, 2021.

At the meeting at the Azerbaijan House in Cologne, Chairman of the Committee addressed the members of the local Azerbaijani community, saying that Azerbaijan Houses play the role of centers that unite our compatriots living abroad. The Azerbaijan House in Cologne too should be a place for Azerbaijanis of Cologne to come together, voice and discuss various issues and problems, organize various events with the participation of prominent members of the local community and German journalists. According to Fuad Muradov, this will contribute to the integration of our compatriots into local society and closer cooperation with the local media.

Then the delegation visited Pantera GYM. It was pointed out that there is a great enthusiasm for sports among young Azerbaijanis living in Germany, and they have the opportunity to come to this gym several times a week and spend their free time effectively. 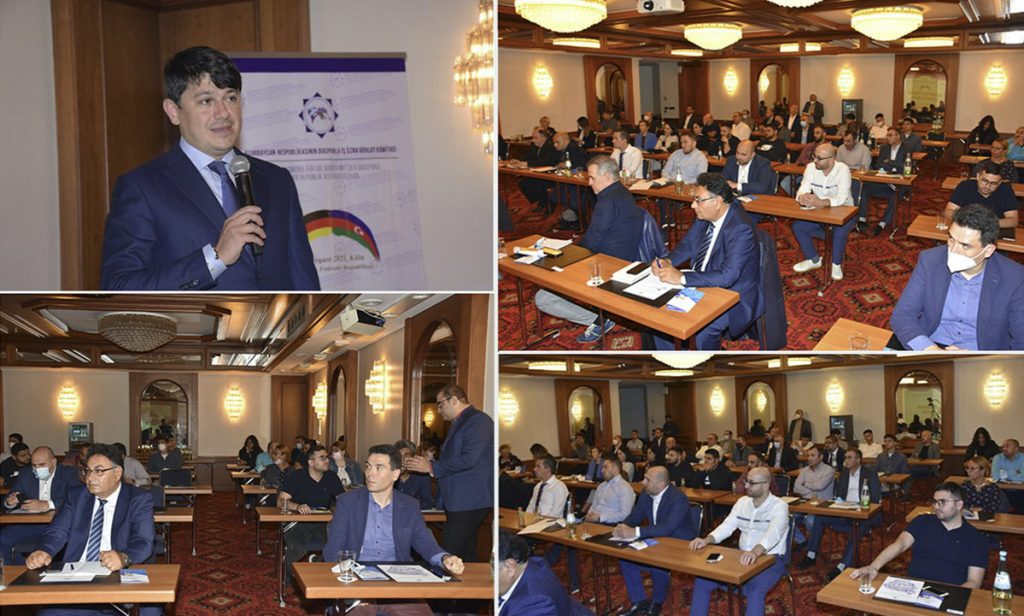 Fuad Muradov once again congratulated our compatriots on the bright and glorious victory in the 44-day war. He recalled the all-European Karabakh rallies and other events held in Germany and reminded that our strength is in our unity. “We must achieve unity. There are many values that unite us today. We must pay more attention to the values that unite people and strengthen us,” he said.

Prominent Azerbaijanis of Cologne also took the floor: Elnur Richter, a government official from North Rhine-Westphalia, Elkhan Sadik-Zada, Senior Research Fellow and Course Leader at Ruhr University in Germany, Head of the Security Economics Group at the University of Cambridge in UK, Visiting Lecturer at University of the Western Cape in South Africa, Orkhan Aras, writer, translator and publicist, Naiba Hajiyeva, Chair of the Society of German-Azerbaijani Friendship, Samir Hasanov, member of IRKAZ, employee of the German company HennaMond, Levent Taşkıran, member of the Turkish Diaspora. They spoke about the importance of unity and solidarity among our compatriots, the importance of preserving national heritage and identity, the unity of the Azerbaijani and Turkish diasporas, the work done to promote the truth of Azerbaijan among the German public, the importance of cooperation with local media.

During the visit to Germany, Chairman of the State Committee on Work with the Diaspora Fuad Muradov and members of the Committee met with Azerbaijani medical professionals at the Institute of Radiology of the University Hospital of Cologne.

The meeting was attended by Dr. Nuran Abdullayev, Head of the Institute of Radiology at the University Hospital Cologne, Chairman of the German-Azerbaijani Radiology and Neuroradiology Society, Elvin Huseynov, graduate of the University of Cologne, Head of the Department of Lung Diseases at Augustereninen Hospital, Akbar Huseynov, doctoral student at RWTH Aachen University, employee of the National Research Center,  Asif Mustafayev, doctoral student at the Institute of Criminal Law and Criminal Procedure of the University of Cologne, holder of fellowship of the State Program on Increasing International Competitiveness of the Higher Education System in the Republic of Azerbaijan for 2019-2020, Nemat Habibov, graduate of the University of Cologne, doctor at St. Joseph Hospital in Wuppertal, and Murad Hasanzade, the first Azerbaijani member of the German Chamber of Auditors and long-term manager for Germany of the British audit and consulting company Ernst & Young.

Opening the event, Nuran Abdullayev told the audience about Azerbaijani doctors working in Cologne and Azerbaijani students studying medicine there. He stressed the importance of involving Azerbaijani businessmen in investing in medical centers in Germany, emphasizing that our compatriots working in this field can make a great contribution to Azerbaijan healthcare, as well as to the promotion of the Azerbaijani realities in their countries of residence.

Chairman of the Committee pointed out the importance of Azerbaijani doctors’ qualifications being acknowledged in Germany, a country with highly developed healthcare. According to him, it is essential that young Azerbaijanis studying in Germany do their best to become highly-qualified, recognized experts in their field. Not only will such specialists be well-regarded in the country where they live, they will also be in position to contribute to the medical field of Azerbaijan in the near future and to influence public opinion to promote our truths to the world.