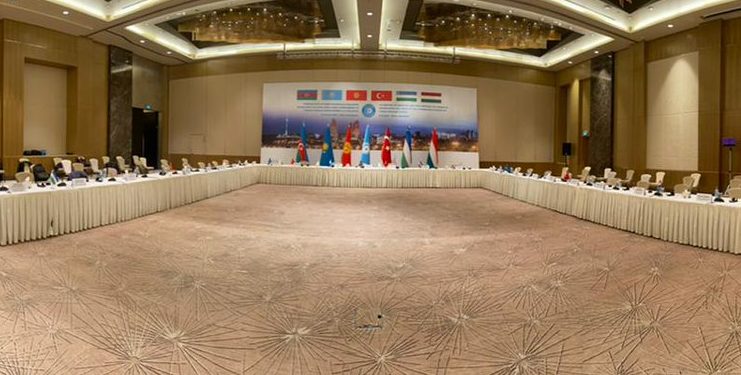 Turkey’s communications director met the assistant to Azerbaijan’s president in the country’s capital Baku on Saturday.

Fahrettin Altun congratulated Hikmet Hajiyev, who also serves as the head of the Foreign Policy Affairs Department of Azerbaijan’s Presidential Administration, on the liberation of the Nagorno-Karabakh region from nearly three decades of Armenian occupation last year.

Altun presented Hajiyev a “Victory Helmet” as a memento of Azerbaijan’s triumph.

The Turkish official also attended the meeting of ministers and high-level officials of the Turkic Council on information and media.

In his address, Altun stressed the need for unity in the Turkich world in the face of existing and emerging threats.

“We have to protect and watch over each other and strengthen our defenses. We have to adapt both our perception of threats and our understanding of cooperation and solidarity to the conditions today,” he said.

The 8th summit of the Turkic Council is scheduled to be held in Istanbul on Nov. 12 this year.

The council was established in 2009 as an intergovernmental organization with an overarching aim of promoting comprehensive cooperation among Turkic-speaking states.

It consists of Azerbaijan, Kazakhstan, Kyrgyzstan, Turkey, and Uzbekistan as member countries, and Hungary as an observer state.