The volume of cargo passing through the Middle Corridor this year will be six times higher than last year, said Foreign Minister Mevlüt Çavuşoğlu on Friday 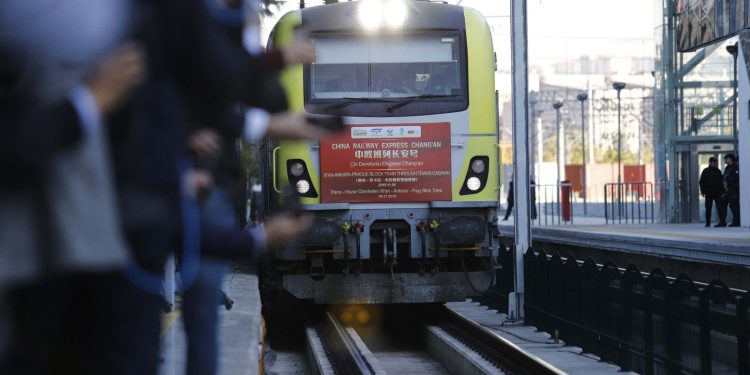 A China Express Railway freight train sets off to its final destination of Prague from Ankara, Türkiye, Nov. 6, 2019. (DHA Photo)

In a joint press conference with his Azerbaijani and Kazakh counterparts, Çavuşoğlu said the importance of the trans-Caspian road and rail network is increasing consistently and piquing the interest of international actors.

The Middle Corridor, which begins in Türkiye and passes through the Caucasus region via Georgia and Azerbaijan, crosses the Caspian Sea, traverses Central Asia and reaches China, is one of the most important components of the efforts to revive the ancient Silk Road.

Earlier on Friday, the second trilateral meeting was held between countries’ ministers of foreign affairs and transport at the port city of Aktau in Kazakhstan.

“The pandemic and the Russia-Ukraine war highlighted the importance of continued access to world markets. This requires a strong transport infrastructure,” the Turkish foreign minister said.

The trilateral meeting mechanism, the first of which was held in Baku in June, aims to reinforce coordination between the three countries and strengthen regional connectivity on the basis of mutual interests.

“We now have a position that provides commercial and economic interaction between Asia and Europe. We can realize our potential by removing the barriers to transportation and trade,” he said.

Before the meeting, the ministers of transport prepared a road map for 2022-2027 that lists concrete steps to strengthen the infrastructure of the Middle Corridor, he said.

Projects such as the Baku-Tbilisi-Kars railway, the Baku-Tbilisi-Ceyhan pipeline and the TANAP pipeline, which were earlier put into operation in the region, are of strategic nature, he said.

Also, the liberation of Azerbaijan’s occupied lands offers new opportunities, he said, adding that the newly opened Fuzuli and Zangilan airports connect Karabakh to the world.

The Fuzuli International Airport was the first major project completed by Azerbaijan after the Second Karabakh War with Armenia which ended in November 2020 through a Russia-brokered deal.

Çavuşoğlu also commented on the Organization of Turkic States (OTS) leaders summit that took place in Samarkand, Uzbekistan earlier this month, saying “we took many steps to strengthen the transport links and commercial cooperation between us.”

The observer status granted to the Turkish Republic of Northern Cyprus in the OTS at the summit strengthened our organization’s access to the Mediterranean, Çavuşoğlu added.

Expressing the determination to further deepen the cooperation not only in trade and transportation but also in cultural and political issues among the states, Çavuşoğlu said: “We attach special importance to the work we do for the common alphabet and the steps to protect our common heritage.”

Touching upon Türkiye-Kazakhstan relations, he said relations between the countries will be raised to the level of an “enhanced strategic partnership,” adding that the two states signed 20 agreements this year.

He also expressed his pleasure in seeing Georgia at Friday’s meeting.