Azerbaijan’s initiative for establishing the Azerbaijan-Pakistan-Turkey Trilateral Parliamentary Cooperation Platform is appreciated. The room for cooperation with Azerbaijan and other Central Asian states is clearer now than ever before, as both sides are taking steps towards a stronger alliance. 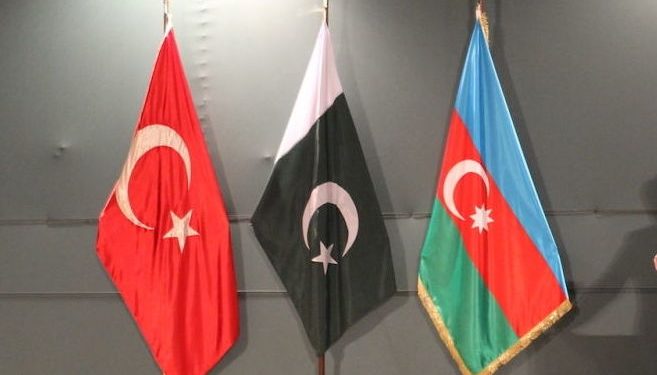 COAS Qamar Javed Bajwa is on a two-day long official visit to Azerbaijan, where he emphasised in a meeting how Pakistan and Azerbaijan share mutual values of cultures, religion and history and geo-strategy. Two weeks earlier, Senate Chairman Sadiq Sanjrani also called for closer Pakistan-Azerbaijan cooperation for the development of political and economic relations between the two countries.

The potential of a partnership between Pakistan, Central Asia and Turkey has been discussed previously. Earlier this year, in January, the Ministers of Foreign Affairs of Azerbaijan, Pakistan and Turkey came together in a trilateral meeting in Islamabad, where the three ministers expressed the sides’ support to each other in the most fateful challenges faced by them.

There is indeed a shared history here upon which the foundations of a strong alliance can be built—the Ottoman, Safavid and Mughal empires are important symbols of a strong Islamic world in the Middle Ages. Stronger ties benefit all sides, particularly Azerbaijan, a relatively smaller military and economic power, against the backdrop of constant tensions between Armenia and Azerbaijan.

Pakistan is a gateway to China and Central Asia, and thus it is natural that it extends a closer friendship with Azerbaijan and other Central Asian countries in order to facilitate and expand CPEC projects. This trilateral cooperation between the three countries would be highly convenient since it provides a connectivity-regional transportation corridor which boosts trade in these post-pandemic economies, leads to the development of infrastructure projects and most of all, promotes peace in the region.