Turkey-Azerbaijan trade to reach $15B with investments, FTA

An increase in the mutual investments and commissioning of a free trade agreement (FTA) could easily pave the way for Turkey and Azerbaijan to reach as much as $15 billion (TL 121 billion) in bilateral trade volume, Turkey’s Trade Minister Ruhsar Pekcan said Friday. 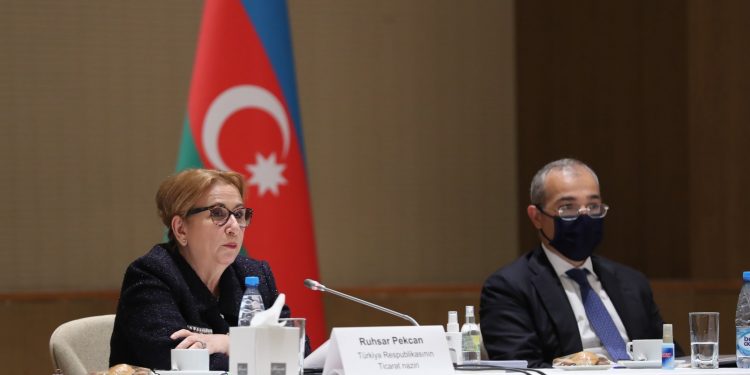 Pekcan’s remarks came as she and the accompanying delegation arrived in Baku to meet with Azerbaijani officials and hold talks on bilateral relations.

Pekcan, during her tie in the Azerbaijani capital, paid a visit to the grave of former President Haydar Aliyev and paid her respects at the Alley of Martyrs to pay tribute to those who lost their lives in a massacre of more than 130 people by the Soviet army in Baku and the surrounding areas on Jan. 20, 1990, on the eve of the country’s independence. The minister also visited the Turkish martyrs’ cemetery in Baku.

Referring to the preferential trade agreement signed between the parties last month, Pekcan said that the ultimate aim is to ink an FTA and that their works are continuing with regards to this.

Pekcan, who stated that the Simplified Customs memorandum of Understanding (MoU) signed between the two countries will come into effect on April 15, stressed that they will work together on the removal of transition quotas, the reduction of toll fees, the strengthening of the Baku-Tbilisi-Kars (BTK) line and the Trans-Caspian International Transport Route (ITR) Middle Corridor and to make Azerbaijan a logistic hub while also contributing to all other regional countries.

Commenting on Azerbaijan’s victory over Armenia and the retaking of occupied Nagorno-Karabakh and surrounding areas, Pekcan said Turkey, with both its state institutions and private sector, is ready to take part in the reconstruction and restructuring of the liberated areas.

The minister later Friday was received by Azerbaijani President Ilham Aliyev, Prime Minister Ali Esedov and head of the National Assembly Sahibe Gafarova and attended a roundtable meeting with Azerbaijan’s Economy Minister Mikayil Cabbarov, where the MoU on e-trade was expected to be inked.

Pekcan, earlier on Thursday had reiterated the importance of an FTA between the two countries saying both parties should aim for this.

The newly agreed preferential trade agreement, which came into effect on March 1, only includes a limited number of products, and a free trade agreement is suitable for both countries, Pekcan said upon arrival in the Caspian country.

Mentioning visa-free travel between the two countries, which has just entered into force, Pekcan said the two brotherly countries should now focus on trade liberalization.