Turkish Foreign Minister Mevlüt Çavuşoğlu on Sept. 27 reiterated Turkey’s support to Azerbaijan and called on parties for normalization process in the region on the first anniversary of the Karabakh war. 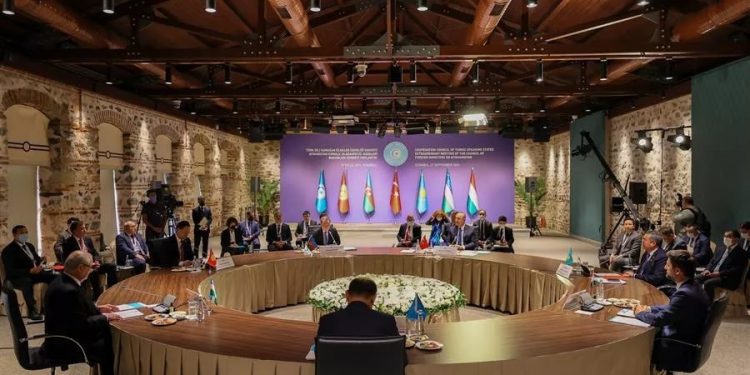 “We want Karabakh to be remembered for peace and development rather than instability and conflict. The region should now enter the normalization process. There are now new opportunities for regional cooperation and prosperity,” he said, speaking at the Extraordinary Meeting of Foreign Ministers of the Turkic Council.

When asked if there is a planned meeting with his Armenian counterpart to make efforts for normalization in the region, Çavuşoğlu said there was no scheduled meeting at the moment.

“Our greatest desire since the beginning is that after the war is over, the region turns into a place of peace and stability. In this direction, as you know, Azerbaijan has offered to sign a comprehensive peace agreement with Armenia. There has yet to be a positive response from Armenia. But in the next period, as always, we will coordinate the steps we can take together with dear Azerbaijan. We decide together; we take steps together,” he stated.

Speaking at the event, Azerbaijani Foreign Minister Jeyhun Bayramov said that Sept. 27 marks the beginning of an end to the Armenian occupation in Upper Karabakh.

“The unity of the Azerbaijani people, army and the chief commander on the battlefield for 44 days showed that status quo had to change,” he said.

The latest big-scale clashes in Karabakh erupted last September when the Armenian army launched attacks on civilians and Azerbaijani forces.

During a subsequent 44-day conflict, which ended under a Russia-brokered deal in November, Azerbaijan liberated several cities and nearly 300 settlements and villages from Armenia’s nearly three-decade occupation.

On Jan. 11, leaders of Russia, Azerbaijan and Armenia signed a pact to develop economic ties and infrastructure to benefit the entire region. It included the establishment of a trilateral working group on the Karabakh issue.

A joint Turkish and Russian center to monitor a cease-fire deal between Azerbaijan and Armenia has since become operational in Karabakh on Jan. 30.

Turkic Council members met in Istanbul to discuss current developments in Afghanistan, where the Taliban have taken power. Top diplomats of the Turkic Council member states Azerbaijan, Kazakhstan, Kyrgyzstan and Uzbekistan and Hungary, which has an Observer State status, attended the meeting.

“Developments in Afghanistan have global implications. However, the Turkish world, as Afghanistan’s neighbor, feels the impact of these developments more,” Çavuşoğlu said.

The fact that millions of Turkish kin live in Afghanistan is of direct interest to Turkey, he added.

“We have special relations with Afghanistan. Therefore, it is important that we send a strong message to the world with the joint statement we will make at the end of the meeting,” the minister said.