'Champions of technology' to be given their awards on May 28 by Turkish, Azerbaijani presidents in Baku. 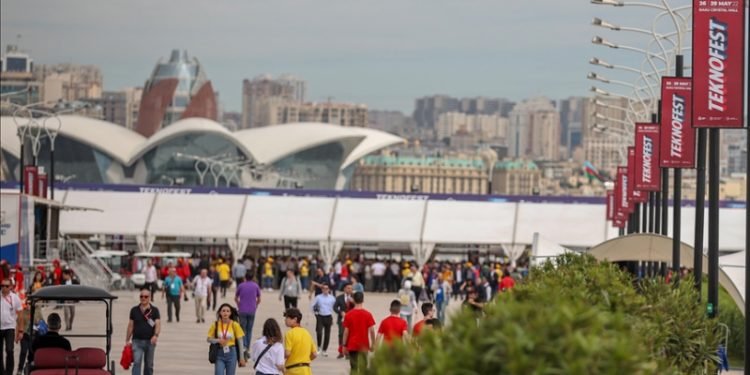 Teknofest Azerbaijan, the 2022 edition of Turkiye’s major technology and aviation fair, kicked off in Azerbaijan’s capital Baku on Thursday.

Teknofest, first held in Turkiye in 2018, is officially expanding to neighboring Azerbaijan this year and is scheduled to be held on May 26-29.

Selcuk Bayraktar, head of the board of the Turkish Technology Team event organizer, visiting the event area prior to the start of the festival told reporters that the enthusiasm of Teknofest can be felt everywhere in Azerbaijan, adding that he expects all Azerbaijani “brothers and sisters” in the event.

Bayraktar said they decided to organize Teknofest in Azerbaijan to strengthen the cooperation between Ankara and Baku and develop critical technologies.

The four-day Teknofest Azerbaijan will feature 10 technology competitions in different fields such as rockets, agriculture, and unmanned aerial vehicles.

At the Baku event, companies and entrepreneurs are set to showcase their products and technical solutions.

Bayraktar underlined that the “champions of technology” will be given their awards on Saturday by Turkish President Recep Tayyip Erdogan and his Azerbaijani counterpart Ilham Aliyev.

“Our nation’s pride, Nobel Prize-winning scientist Aziz Sancar, attended Teknofest in Turkiye, gave our students their awards, and also gave them good advice. He didn’t grind us down again. He will come to Azerbaijan and will give awards to our students,” he said.

Bayraktar also stressed that Teknofest is a paradigm transforming event.

“We should attach importance to technology development so that our country can be independent and prosperous in these areas,” he noted.

He stressed that Teknofest is an event to “instill self-confidence” in people to develop high technology.

Some 5,000 competitors in a total of 1,000 teams applied to the competitions organized as part of the event, while over 250 of the 1,000 teams that applied made it to the finals.

A total of 32 countries, including Germany, the US, Ireland, Pakistan, Egypt, Argentina, Turkiye, Azerbaijan, and other European countries, attended the Take Off Baku, an initiative summit held in Baku Crystal Hall as part of Teknofest Azerbaijan.

Anadolu Agency has been the event’s global communication partner since 2018.