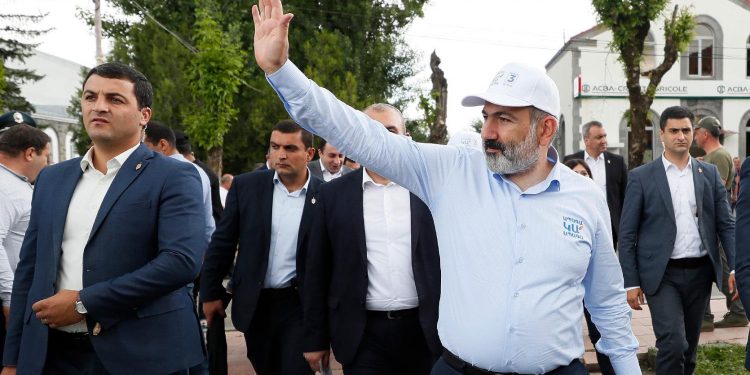 Practically all of the 21 parties and four alliances contesting the Armenian elections placed the war and Nagorno-Karabakh at the centre of their election campaigns.

On the eve of the election, the International Crisis Group (ICG) published a worrying report on the post-war situation surrounding Nagorno-Karabakh. The ICG concluded that ‘mass displacements from Nagorno-Karabakh, the scramble by military forces to build up new frontline positions, and a looming humanitarian crisis all add up to a fragile situation’ in and around the region. The report further warned that ‘already frictions along the new front line, which lies close to civilian settlements, threaten renewed violence’.

Land mines and prisoners of war

The formerly occupied areas of Azerbaijan have been described as the most heavily mined region of the world. Until a week ago, Armenia denied it had any maps of extensive mines it had laid. But in exchange for maps of mines covering one of the seven districts, Azerbaijan released 15 Armenian prisoners of war.

The mines are preventing the return of Azerbaijan’s three quarters of a million internally displaced persons (IDPs), who were forced to leave their homes during the First Nagorno-Karabakh War in 1988-1994. The ICG reported that ‘the longer it takes for Nagorno-Karabakh residents to return home and resume some semblance of normal life, the harder it will be to jump-start future peace efforts.’

Frustration among IDPs at not being able to return home will lead to growing pressure on the Azerbaijani authorities to take firmer action. President Ilham Aliyev has already criticised Armenia for a perceived lack of reciprocity after Azerbaijan returned the bodies and remains of 1,000 Armenian soldiers. ‘But to not give us the maps of the minefields, means intentionally dooming civilians’ Aliyev said.

Armenian soldiers captured on its territory since the ceasefire are classified by Azerbaijan as ‘saboteurs’ and ‘terrorists’ rather than ‘prisoners of war.’ Armenia disagrees, and with its powerful lobbies in the US and France, the country has ensured its position has supporters in Washington and the European Parliament. Armenia claims Azerbaijan still holds as many as 200 prisoners of war, a figure which Baku disputes. Azerbaijan captured 62 Armenian soldiers in December 2020, a month after the ceasefire agreement was signed.

Since the ceasefire, seven soldiers and 15 civilians have been killed by land mines and over a hundred have been wounded. On 4 June, two journalists, Sirac Abisov (state AzTV) and Maharram Ibrahimov (AzerTag), and a local official were killed by a land mine. Another four were wounded. Continued tensions, political instability in Armenia, and the danger of mines are preventing international organisations such as the UN from delivering humanitarian assistance to the region. Currently only the International Committee of the Red Cross is on the ground.

The ICG has drawn attention to the 4,000-strong Russian peacekeeping contingent not having a clear mandate, particularly in the event of hostilities again breaking out between Armenia and Azerbaijan. Armenia is a founding member of the Russian-led Collective Security Treaty Organization (CSTO), Russia supplies all of its military equipment, and Russia has two military bases on its territory. Military defeat in last year’s war has made Armenia even more reliant on Moscow and all of the political forces contesting Armenia’s elections gave their support to a strong alliance with Russia.

Russia’s peacekeeping mandate ends in 2025. All political groups in Armenia want Russian forces to remain ‘as the only guarantee of preventing massacres and the deportation of Armenians.’ ‘However, no one says how Armenia can guarantee this and what will happen if Russians leave.’ Azerbaijan is unlikely to seek a renewed mandate for Russian peacekeepers, preferring instead to replace them with peacekeepers from the UN or the OSCE.

Land mines should be at or near the top of the agenda in negotiations between Armenia and Azerbaijan as they are an obstacle to achieving a durable post-war settlement. If Armenia does not hand over further maps of mines it has planted, tensions will continue to simmer in the Karabakh region for years to come, preventing the demarcation and delimitation of their border and Armenia from reaping the benefits of renewed transportation links, re-opened borders, and increased trade. Renewed hostilities between Armenia and Azerbaijan remain a real possibility as long as the mine question prevents a comprehensive peace settlement.