Why Russia and Türkiye need each other

While Russia and Türkiye continue to expand economic relations, the countries are often geopolitically at odds. The pragmatism of this relationship means that despite their differences, Russia and Türkiye are likely to remain unlikely bedfellows writes Nikola Mikovic. 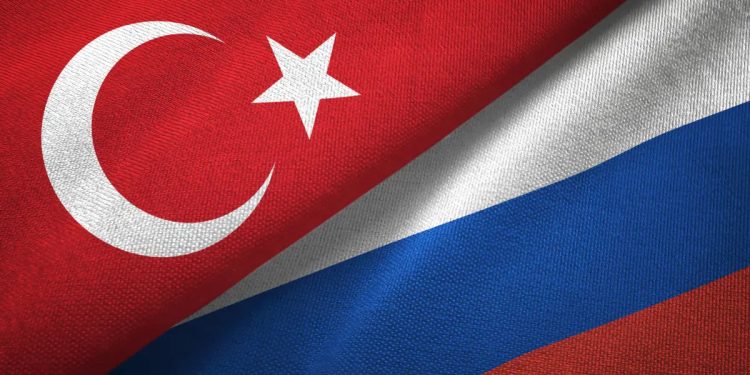 Amidst the backdrop of the Russian invasion of Ukraine and growing tensions between Armenia and Azerbaijan, Moscow’s and Ankara’s energy interests seem to be prioritized over the two nations’ fundamentally different geopolitical goals in places such as Syria, the Black Sea region, and the South Caucasus. Yet, despite being on opposite sides in various proxy conflicts across the world, Russia and Türkiye continue to increase their economic cooperation. Even as tensions escalate across in areas where Russia and Turkey have competing interests, both countries are committed to maintaining their economic partnership.

Despite sanctions imposed by the West on the Russian Federation over its actions in Ukraine, Russia continues its business with Türkiye. According to Russian sources, in 2021, the volume of trade between Russia and Türkiye reached almost $35 billion and is expected to grow to $50-60 billion in 2022. In the energy sector, Russia’s state-run nuclear giant Rosatom has reportedly transferred “around $5 billion” to a subsidiary in Türkiye that is building a $20 billion nuclear power plant in the country’s Mersin province. At the same time, amid the European gas crisis, the TurkStream pipeline—connecting Russia and Türkiye via the Black Sea—remains the only route that continues to flawlessly provide natural gas to Europe. While the capacity of the TurkStream is lower than that of Nord Stream 1, at 31.5 billion cubic meters and 55 billion cubic meters, respectively,  it remains significant, especially now that Russia has cut the volume of the natural gas it sends to Europe through the Nord Stream 1 pipeline.

“European partners should be grateful to Türkiye for ensuring uninterrupted transit of our gas to European markets,” Russian President Vladimir Putin told his Turkish counterpart Recep Tayyip Erdogan during a recent summit between the two leaders held in Russia’s Black Sea resort of Sochi on August 5.

Reports suggests that Putin and Erdogan have agreed that Ankara will start making payments for Russian natural gas in rubles. In 2021, Russia provided roughly a quarter of Türkiye’s oil imports and nearly half of its natural gas purchases. It is, therefore, not surprising that Ankara has refused to join anti-Russian sanctions and is trying to balance its NATO alliance with its economic relations with Moscow.

However, this does not mean that Türkiye sees Russia as a friendly country, even if Erdogan once called Putin his “dear friend.” In reality, the two countries are neither friends nor allies. Historically, they were bitter enemies who fought several wars. Today, the two nations are engaged in at least two proxy conflicts—in Syria, where Russia backs President Bashar Al Assad and Türkiye supports various opposition factions in the north of the country, and also in Libya where the Russia-sponsored Libyan National Army has been fighting against the Ankara-backed Government of National Accord.

Similarly, in the South Caucasus region—where Azerbaijan and Armenia fought a 44-day war over the mountainous region of Nagorno-Karabakh—Türkiye openly supports Baku while the Kremlin has a nominal alliance with Yerevan through the Collective Security Treaty Organization. Given that the situation in Nagorno-Karabakh recently escalated, it is highly likely, that relations between Armenia and Azerbaijan were included on the agenda for the Sochi summit.

While growing tensions in both Syria and the South Caucasus could spell trouble for the Russian-Turkish partnership, these two flash points may also provide an opportunity for both nations to find space for continued negotiations. In Syria, Türkiye needs Russia’s green light to launch its own “special military operation” against the Kurdish-dominated People’s Defense Units (YPG) in the north of the country. However, Russian forces continue bolstering their presence in the region and the Kremlin has repeatedly called on Ankara not to launch an invasion of northern Syria. For Moscow, it is a challenge that Ankara is significantly increasing its influence in the South Caucasus region. Russia still has some 2,000 peacekeepers in Nagorno-Karabakh, but has proved unable to prevent Azerbaijan from seizing additional territory in the region. This may mean that Türkiye could use Baku’s leverage over Yerevan to pressure Moscow to make concessions to Ankara. The coming days and weeks will show if Putin and Erdogan have reached a deal.

At the same time, Türkiye, as a NATO member, has continued supporting and arming Ukraine while Moscow has turned a blind eye to such Turkish actions. From the Kremlin’s perspective, the interests of Rosatom and the state-owned energy giant Gazprom, remain paramount meaning Russia cannot allow relations with Ankara to deteriorate. Quite aware of that, Türkiye seeks to portray itself as a mediator in the Russo-Ukrainian conflict and increase its own influence in the Black Sea region. Even Putin had to admit that, as a result of Erdogan’s direct participation, the issue related to the supply of Ukrainian grain from the Black Sea ports had been resolved.

Furthermore, Türkiye has an opportunity to benefit from the grain deal that Russia and Ukraine reached in Istanbul on July 22. Turkish companies have already expressed their readiness to process Russian and Ukrainian grains in flour and sunflower oil, and sell them to other parts of the world. In addition, Türkiye will now be able to buy grain from Ukraine and the Russian Federation at lower prices—which could have a positive impact on the Turkish inflation-hit economy. These economic incentives mean that, for the foreseeable future, Russo-Turkish relations will remain dynamic and very pragmatic.