World will benefit from peace in Caucasus: Erdoğan

All the regional countries, including Armenia, and the entire world will benefit from the peace and tranquility in the Caucasus, President Recep Tayyip Erdoğan has said in an address to the national parliament of Azerbaijan. 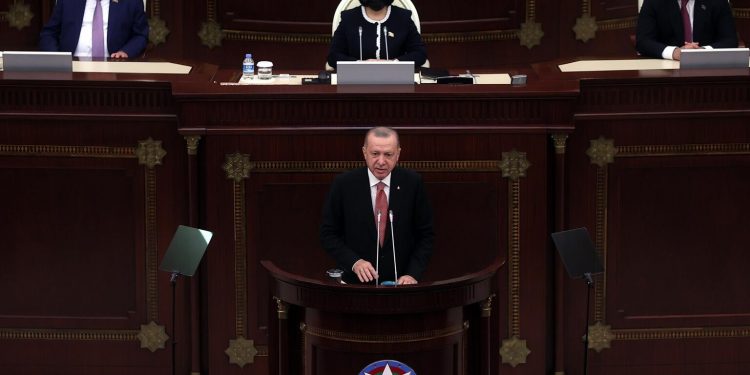 “Not only Azerbaijan, but all regional countries, including Armenia, and the world will benefit from peace and tranquility in the Caucasus,” Erdoğan told Azeri parliamentarians in a special session at the National Parliament on June 16.

Erdoğan is paying a two-day visit to Azerbaijan upon the invitation of Azerbaijan’s President Ilham Aliyev. The two leaders first met in Shusha, a city liberated from the Armenian occupation and later moved to Baku.

Azerbaijan liberated its territories from the Armenian occupation as a result of a six-week armed conflict in late 2020. Turkey had provided military and political support to Azerbaijan during the conflict.

“As a result of the Azerbaijani victory, peace and tranquility prevail in Nagorno-Karabakh,” Erdoğan said, urging the world not to denounce Azeri victory in the region. “The positive results of this victory will be observed with time,” the president stressed, appreciating Baku’s efforts to reconstruct the region ruined by the Armenians.

“Today, we stand by Azerbaijan with all our means. Let the whole world know that we will be with you tomorrow,” he said.

The new situation in the Caucasus can be to the benefit of Armenians as well, Erdoğan said, repeating Ankara and Baku’s joint call for the establishment of a six-way platform with the participation of all the regional countries.

“Georgia had some questions about it. In my last meeting with the Georgian president, I explained how the process would develop. He said he will study the proposal,” Erdoğan informed.

Turkey’s opening of its borders with Armenia will surely have positive consequences for the latter, Erdoğan suggested, reiterating his calls on Yerevan to start a new era in the Caucasus by normalizing its relations with Azerbaijan and Turkey.

Recalling that the international community has done nothing to resolve the Nagorno-Karabakh conflict for 30 years, Erdoğan stressed, “Karabakh is also the place where the plans of those who see the world as the arena of their political and economic ambitions are spoiled.”

After the completion of his formal program, Erdoğan and Aliyev watched Turkey’s football match against Wales as part of the Euro 2020 tournament.