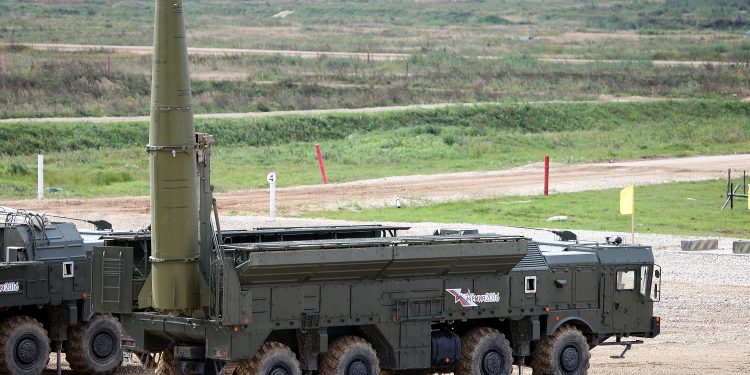 The group published the impact coordinates of the location of two alleged missile strikes on the city of Shusha during the war, as well as photos that appeared to show remnants of the missiles. The photos show missile type and serial numbers on the component fragments which identified them as Iskander missiles.

This new evidence of the use of Iskander missiles comes after multiple claims by various individuals and organizations that they were or were not used. On February 16, former Armenian President Serzh Sarkisyan criticized current Prime Minister Nikol Pashinyan for not utilizing their Iskander missiles earlier in the war against targets beyond the line of contact, implying that they had been used. In a February 23 interview, Pashinyan replied to Sarkisyan’s comments by saying that Iskander missiles “did not explode or only exploded 10% of the time.” The Russian Defense Ministry reacted to these claims stating that no Iskander missiles were used during the Second Nagorno-Karabakh War. On February 26, Azerbaijani President Ilham Aliyev also denied the use of Iskander missiles saying that Azerbaijan did not see them used or launched. However, on April 12, Aliyev claimed that Iskander-M missiles were used on the city Shusha in Nagorno-Karabakh. He claimed that Azerbaijan has “enough information” and is only waiting for an “official explanation” of their use.

A photo via caliber.az shows a component with the marking “9M723” on a piece of the missile’s wreckage. The Iskander-M version is a the highly versatile model with a range of up to 500 km (310 mi) that is only found in the Russian military. Its warhead can be conventional high explosive, nuclear, or other variants, and has a unique flight pattern that evades interception during its flight and terminal phases. The Iskander-E (E for “export”) systems were delivered to Armenia in 2016. The Stockholm International Peace Research Institute’s (SIPRI) arms export database indicates the missiles in Armenia’s possession were the 9M723 version. The Iskander-E is the 9M720 variant, which could indicate that the base model is from the -M but was modified for export. Given that the airframes and components for the missiles are based on the -M, or the 9M723, it is highly likely that the -E version has markings found in the -M version.

Russia emphasized that the systems sold to Armenia differed from the Iskander-M systems deployed to Russia’s 102nd Military Base in Gyumri, Armenia since 2013. The -E model is a short-range ballistic missile system with a maximum range of only 280 km (174 mi) in order to comply with the guidelines of the Missile Technology Control Regime (MTCR). The videos appear to show two Iskanders being launched from Armenia. The flight paths, while visible in the videos, appear to be normal trajectory arcs that are indicative of an -E model rather than using evasive flight maneuvers that would indicate an -M model Iskander.

Given that the -M version is nuclear-capable, it would be a grave matter if Russia sold or transferred a nuclear-capable weapon system to Armenia, because it would violate international arms agreements that were in effect at the time, such as the Nuclear Non-Proliferation Treaty (NNPT). The possibility that the weapons could be discovered as -M models at some point or used by Armenia in a conflict with Azerbaijan could pose a serious international issue for Russia. Therefore, it is highly unlikely that Russia transferred -M models to Armenia due to the potential blowback it would certainly receive from the international community for transferring nuclear-capable weapons to Armenia.

However, Russia stated unequivocally that no Iskanders were fired during the conflict when the evidence is clearly to the contrary. While this statement was initially echoed by both Armenia and Azerbaijan, Azerbaijan has now refuted it, claiming that -M models (not the -E models) were used. If the allegations are true, Russia’s reputation as a high-quality arms exporter and claims of compliance with international arms control regimes would be severely damaged. Armenia has yet to respond to Azerbaijan’s allegations and has previously denied these claims. Armenia, the recipient of such advanced weaponry, cannot afford to alienate its major supplier of armaments, regardless of whether they were tactically or operationally effective in the war.

In contrast, while Azerbaijan received substantial Russian weaponry in years past, it now has other options for procurement in that Turkey and Israel provided advanced capabilities which were used with profound effect during the war against Armenia’s advanced Russian armaments.  Perhaps President Aliyev now perceives he can—or should—rely upon other weapons providers and transition off the less-potent Russian capability base.  With this calculation, it would become possible to claim the use of the Iskander -M models and willingness to incur Russian anger over the issue. Regardless, Russia can make significant mischief for Azerbaijan over the Iskander issue via its peacekeeping forces in Nagorno Karabakh.