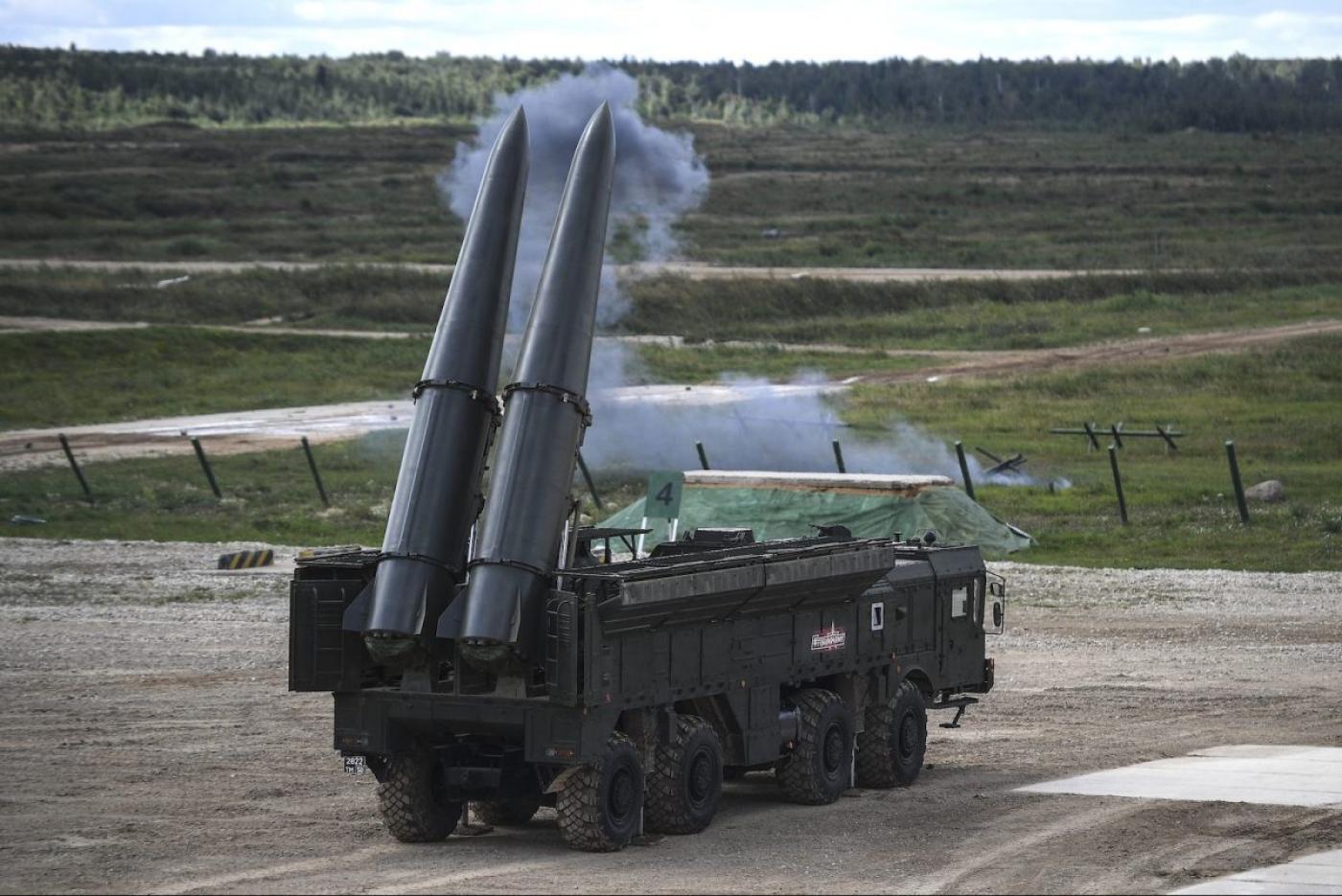 Russian officials give a presentation of the Iskander M missile at the 4th international military technical forum in August 2018 in Kubinka. (AFP)

Armenia and Azerbaijan agreed on a Russia and Turkey-brokered ceasefire after six weeks of heavy fighting in November, following the Azerbaijani army’s seizure of the strategic city of Shusha (known as Shushi in Armenian).

According to the senior official, Russia encouraged Armenia to use Iskandar missiles and provided material support for their launch, in order to compel Azerbaijan, which was capturing territory at a fast rate, to give the ceasefire a chance.

“An Iskander ballistic missile was launched by Yerevan directly into the capital days before the ceasefire. It was concerning for Azerbaijani officials. But a missile defence system operated by the Azerbaijani military, an Israeli-made Barak-8, shot it down,” the official said.

“Further use of these missiles could really escalate the situation on the ground. And I think, among other things, it convinced the Azerbaijani leadership to go for a ceasefire.”

A senior Armenian military official who has taken part in the war told journalists in November that Yerevan indeed fired the short-range missile at Azerbaijan.

“[It] was used during the war though I will not say where,” Colonel-General Movses Hakobyan said, according to a report by Bloomberg, after he had stood down as head of the defence ministry’s military control service.

Russia also delivered military supplies to Yerevan during the war “as much as their conscience allowed”, he added.

Azerbaijan has an operational land-based version of Barak 8-system with 12 launchers and 75 surface-to-air missiles, which could have been used to take down missiles like the Iskander. The system was acquired by Azerbaijan in 2018 and has been tested.

Video footage, which appeared on social media hours before the declared ceasefire on 9 November, indicated that Armenia launched an Iskandar missile into Azerbaijani territory.

Can Kasapoglu, director of defence research at Turkish think tank EDAM, told MEE that Iskander systems were mobile and Baku was within its range from Nagorno-Karabakh.

“It is quite plausible that Armenians have tried to target Baku with an Iskander as a last resort to put pressure on Azerbaijan for a ceasefire,” he said. “The use of Iskander matches with Armenia’s intra-war deterrence efforts as they were overwhelmed by Azerbaijani technological superiority in the battleground.”

Early in the conflict, the Armenian military targeted Azerbaijan with Tochka and Scud missiles. Kasapoglu suggested it was understandable that Armenia would resort to more advanced models such as the Iskander as its situation became more desperate.

“Of course, using these assets on the civilian population, which the Armenian missiles hit, was a war crime,” he added.

Kasapoglu, who will release a report this week on Armenia’s use of Iskander systems during the war based on open-source information, said his research suggests that Armenia launched the missile 24 or 48 hours before the ceasefire.

“We believe that Russians played a role since the missile command center is jointly run by Armenian and Russian military officers.”

Ilham Aliyev, Azerbaijan’s president, told a group of journalists last week that Armenia had fired several ballistic missiles into Azerbaijani territory, and regional countries were able to track them.

Both Azerbaijani and Armenian forces have been accused of war crimes and abuses in Nagorno-Karabakh, a disputed mountain territory.

The Iskander revelation comes as Armenia is enduring a moment of grave political uncertainty, due to a public dispute between Prime Minister Nikol Pashinyan and military leaders that erupted last week over the effectiveness of the Iskander missiles during the war.

Azerbaijan has declared total victory in Nagorno-Karabakh after its Turkey-backed forces crushed Armenian opposition to its offensive.

Pashinyan said in an interview last week that the missiles did not explode or were only 10 percent effective, because they might be outdated.

His remarks were quickly mocked by one of the senior military officials, Tiran Khacharyan, the first deputy chief of general staff, who was quickly dismissed by the prime minister.

The military responded on Thursday with an ultimatum, asking for Pashinyan’s resignation over his “failure” to make reasonable decisions at a critical time after the defeat in Nagorno-Karabakh.

Pashinyan slapped the declaration as a “coup attempt”, and tried to dismiss the senior military leadership, but couldn’t get President Armen Sarksyan’s necessary support.

After days of protests and the military firmly standing its ground, Pashinyan took a step back on Monday, announcing through his press secretary that he was not “properly informed” about the situation.