A protest action against Armenia was held in Sao Paulo

A protest action was held in front of the Honorary Consulate of Armenia in Sao Paulo, Brazil, at the initiative of public activist Andreia Hiromi. 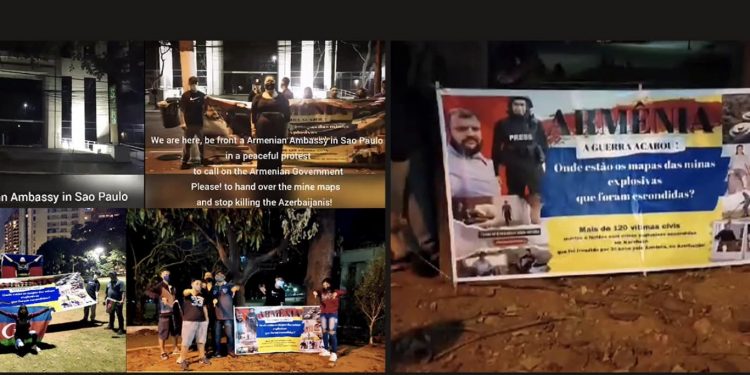 The purpose of the action was to draw attention to the refusal of Armenia to hand over mine maps to the Azerbaijani state, the death of Azerbaijani journalists Maharram Ibrahimov and Siraj Abishov, who were on duty in the Kalbajar region caused by a mine explosion.

A group of Sao Paulo residents participating in the rally with the state flags of Azerbaijan and Brazil displayed photos of Azerbaijani journalists and posters depicting the mine crimes in Armenia. Hiromi said that Armenia ignores Azerbaijan’s insistence on submitting mine maps. Protesters stated that Brazilians support the just and fair position of in Azerbaijan.

As well as, Hiromi and his friends, known for their love for Azerbaijan, launched a campaign to place posters in public places in Sao Paulo, including in front of the Armenian consulate, protesting against the inadmissible behavior of the terrorist state of Armenia. Local residents interested in the action were informed in detail about the war crimes and provocations committed by Armenia against our people.