Starting in mid-May, a wave of confrontations between Armenian and Azerbaijani forces have taken place in disputed border areas after large-scale fighting between the two states ended in November last year. While both sides trade accusations of violating each others’ international borders, there may be logical reasons for the recent spike in Armenian-Azerbaijani confrontations and their timing. 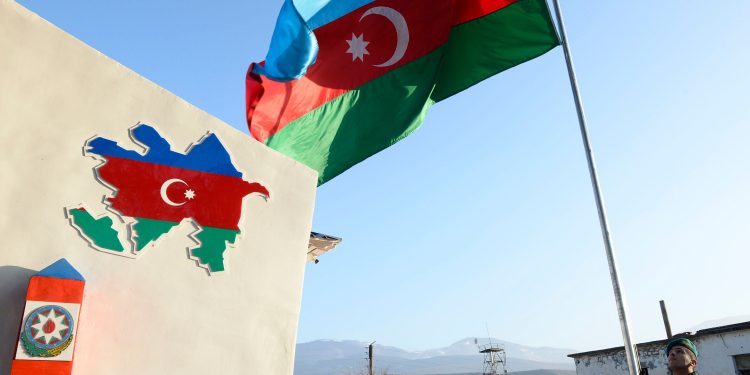 An Azerbaijani border guard raises the national flag during the opening ceremony of the frontier post in the village of Zangilan, Azerbaijan, Jan. 5, 2021. (AFP Photo)

Armenia’s upcoming parliamentary elections, unresolved issues of prisoners of war, the status of Nagorno-Karabakh, and the question of the “Zangezur/Syunik corridor” have all possibly contributed to the recent events.

BACKGROUND: Armenian media have recently drawn attention to the Azerbaijani army’s alleged incursion into the Black Lake area in the easternmost part of Armenia’s Syunik (Zangezur) province. According to these reports, Azerbaijani military units are committing an act of state aggression, with over 250 elite forces being located in an area several dozen kilometers into Armenian territory. Opposition representatives point to the weakness of Armenian authorities which, following Armenia’s defeat in the 44 Day War of 2020, have enabled Azerbaijani aggression without any resistance. The governor of the Syunik province has also been vocal about the alleged aggression while some Armenian commentators assert that these events are part of a Turkish-Azerbaijani scheme to bridge “mainland” Azerbaijan with its Nakhichevan/Nakhjivan exclave.

Although more recent reports indicate that some Azerbaijani troops have withdrawn from the Black Lake area, additional Azerbaijani Special Forces reconaissance units were spotted not only in Syunik, but also in Gegarqunik province. One Armenian soldier was killed on May 25, in an armed confrontation with Azerbaijani forces near Verin Shorzha village in Gegarqunik province. Earlier, on May 20, Armenian acting Prime Minister Nikol Pashinyan declared that 500-600 Azerbaijani soldiers were currently deployed on Armenian territory. Further confrontations between the two sides occurred near Khoznavar village, where local residents reported that Azerbaijani servicemen occupied a number of strategic heights overlooking the village. According to the Armenian Ministry of Defense, 11 Armenian soldiers were hospitalized after a fist fight that occured between them and Azerbaijani forces near the village.

The recent wave of border confrontations was accompanied by large-scale Azerbaijani military excercises on May 16-20, involving over 15,000 troops and taking place in the Baku-controlled territories of Nagorno-Karabkh and in Nakhichevan. Russia and the Collective Security Treaty Organization have not been responsive to Armenian calls for assistance. While Russia has consented to act as a mediator, talks between the two conflicting sides have so far been unproductive.

IMPLICATIONS: Interviews were carried out with several Azerbaijani experts about the substance of the ongoing events.

A source in the Azerbaijani Ministry of Foreign Affairs (MFA) who wished to remain anonymous claimed that the border troop movements is part of Baku’s plan to exert pressure on Yerevan on the eve of the upcoming negotiations over Nagorno Karabakh’s status, as well as the demarcation of the Armenia-Azerbaijan borders. Azerbaijan is allegedly showcasing its military superiority in neighboring Armenian areas in order to frighten the Armenian public and demonstrate Baku’s determination to safeguard its interests in light of the continuous absence of tangible support for Armenia from Moscow. In Baku’s analysis, this is needed since a significant part of Armenia’s population and political elites do not accept the outcome of the 2021 war. At the same time, concerns are rising in in Azerbaijan over Russia’s presence in Karabakh and its seeming intention to remain in the area, as demonstrated by Moscow’s sizeable investment in local infrastructure, aid to the local population, and expectations that Armenians residing in Karabakh will be granted Russian citizenship.

Likewise, many in Azerbaijan’s expert circles – including in the highest elite – have expressed concern over Russia’s backing of Armenian military forces in Karabakh. Whereas Azerbaijanis interpret the November 2021 accords to stipulate the complete withdrawal of armed formations from the Armenian-inhabited sections of Karabakh, Armenians have a different opinion as they plan to keep a police force – and, likely, some limited military formations from Armenia alongside the Russian peacekeepers. The Azerbaijani side is therefore pushing for a speedy solution to the Karabakh crisis in order to limit Russia’s opportunities to boost its presence in the region and to carry out anti-Azerbaijani policies should Azerbaijani-Russian relations worsen. This is a distinct possibility in light of Moscow’s pressure on Azerbaijan to comply with Russia’s integrationist agenda and its interests in the hydrocarbon sector; pressure that Baku seeks to withstand. In Azerbaijan, the recent events are presented as motivated by Yerevan’s disregard for the Armenian-Azerbaijani agreement of the early 1920s, brokered by Stalin, according to which Armenia’s control over Syunik (Zangezur) was conditioned on Azerbaijan’s control over Karabakh. Since the Armenian side disregarded the agreement, Azerbaijan argues it has a right to claim back Syunik – a once-contested area with a large Azerbaijani population that was partially expelled in the course of the 20th century.

On the other hand, several Azerbaijani observers have claimed that instead of pressuring Yerevan into a more acceptable position over Karabakh’s status or paving the ground for the annexation of parts of Syunik – in itself an unrealistic proposition given Armenia’s alliance with Russia and Baku’s unwillingness to engage in a large-scale war with its western neighbor – Baku is simpy seeking to restore the Soviet-era borders. In the 1980s, prior to the eruption of the Karabakh war and Armenia’s occupation of the seven areas neighboring Karabakh, the border between Soviet Armenia and Soviet Azerbaijan ran across the Black Lake. Even Google Maps shows the Black Lake as delineated between these countries. The argument is simple: Azerbaijan does not claim Armenia’s territory, it just wants to return to the legitimate Soviet-era borders; not just in this area but along the entire perimeter of Armenian-Azerbaijani borders. The uproar among the Armenian public is thus seen as besides the point and largely caused by anti-Pashinyan forces which seek to pitch the population against the “impotent” prime minister on the eve of parliamentary elections.

A combination of both explanations is likely driving Baku’s policy regarding the contested areas along the Azerbaijani-Armenian borders.

Armenian sources hypothesize that the recent Azerbaijani advances are a mixture of opportunistic land grab attempts and reconaissance efforts in order to test Armenian defenses on the border. Bearing in mind that in addition to the lack of precise Soviet-era maps on republican borders, Armenia has no border defences in provinces bordering previously occupied Azerbaijani territories, which opens a window of opportunity for Azerbaijani forces to expand their control of the border by occupying strategic heights. A dominant opinion in Yerevan is also that Baku seeks to divert the attention of both mediators and the international community from remaining unresolved issues (such as the Armenian POWs and the status of Nagorno-Karabakh) by creating new negotiation agenda in Syunik.

Unlike their Armenian counterparts, Azerbaijani authorities are eager to complete the demarcation of republican borders in order to officially cement Baku’s control over the territorial gains of the 2020 war. In addition, Baku continues to remind both Yerevan and Moscow about one of the clauses of the 2020 peace agreement; the “Zangezur corridor,” which is expected to connect Azerbaijan’s Nakhichevan exclave with “mainland” Azerbaijan, providing Baku with a direct land connection to Turkey. Baku’s and Yerevan’s views on what the corridor should look like diverge significantly. While Baku envisions the corridor as a series of roads through Armenian territory to Nakhichevan, Yerevan considers it to merely mean that communications are to be reopened. Therefore, Yerevan also considers recent Azerbaijani advances in the border areas as efforts to lay the foundations for the corridor. Baku’s unwillingness to return 200 POWs to Yerevan appears to be part of Baku’s strategy to exert pressure on Armenia in light of these contested and highly sensitive issues.

CONCLUSIONS: Although Baku and Yerevan advance different interpretations of their recent and ongoing border clashes in Syunik and Gegarkhunikh provinces, both seem to be willing to use de-escalation of these tensions as a bargaining tool in forthcoming negotiations. On the one hand, it seems unlikely that Baku would be willing to cede areas recently occupied by its border patrols without noteworthy concessions from Yerevan. On the other hand, successfully “liberating” borderlands from Azerbaijani patrols at the expense of expediting the Zangezur corridor could work as a face-saving solution for Pashinyan, particularly since Armenian concessions on the corridor question are unaviodable in the near future.

Emil A. Souleimanov is Professor at the Institute of Political Studies, Faculty of Social Sciences, Charles University, Prague.

Huseyn Aliyev is a Lecturer and Research Fellow in Central and Eastern European Studies (CEES), University of Glasgow.