Aliyev in Moscow amidst intensified clashes on the Armenia-Azerbaijan border

The president of Azerbaijan, Ilham Aliyev, arrived in Moscow today (20 July) on the invitation of the Russian president, Vladimir Putin. This is Aliyev’s second working visit to Russia this year – the first, on 11 January with the Armenian prime minister – and comes amidst clashes on the Armenian-Azerbaijani border. 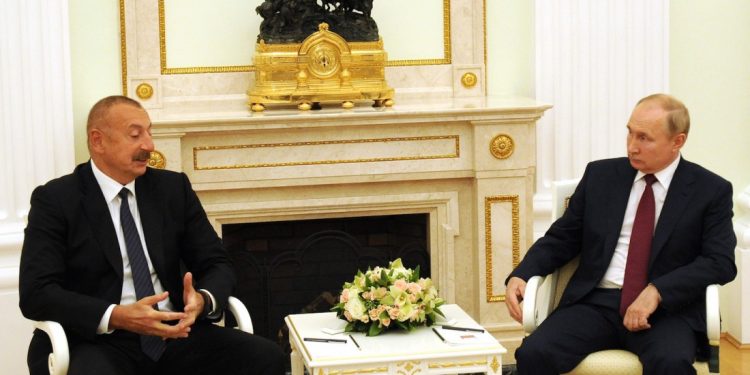 A statement yesterday by the Kremlin said, “the main focus [of the leaders’ discussions] will be given to the practical aspects of the implementation of November 9, 2020, and January 11, 2021, agreements of leaders of Russia, Azerbaijan, and Armenia on Nagorno-Karabakh, including regarding the unblocking and development of economic and transport ties”.

“Of course, one of the most important issues remains the issue of resolving the situation in the region. I know that, of course, you pay much more attention, [attach] importance, and I want to thank you for finding compromise solutions. They are always the most difficult, but if we want – and we all want – settlement, then we must follow this path. Until now, we have been able to do this, for which I want to thank you.”

After thanking Putin for his invitation and noting developments in Russian-Azerbaijani relations, Aliyev followed with:

“And of course, the topic of the post-conflict situation in the region. I would like to express my gratitude to you for your constant attention to this issue, personal participation in solving very important and sensitive issues. We are in constant contact with you.

“Over the past eight months after the end of hostilities, I think that our personal communication – both in Moscow in January and by phone – played a very important role in stabilising the situation. We are determined to ensure that the post-conflict period is as painless as possible. I think we succeed in this with our joint efforts.”

Aliyev finished by noting that the men would discuss “important issues of interaction and regional problems”.

In the last days, reports of clashes have intensified on both Armenia’s eastern border with Azerbaijan and its western border with Azerbaijan’s exclave, Nakhichevan. On the morning of 14 July, it was reported that an Armenian soldier was killed by a sniper and an Azerbaijani was serviceman was injured in fire exchanged on the Yeraskh/Sadarak section of the Armenia-Nakhichevan border. The Armenian Ministry of Defence (MOD) reports that Azerbaijani armed forces opened fire on Armenian positions after the Armenian side had attempted to stop them from constructing fortification works intended to “advance their battle positions”. The Azerbaijani MOD, however, maintains that it fired in retaliation.

To the east, the following day (15 July), the Azerbaijani MOD reported fire opened on its positions in the vicinity of Shusha, a city that returned to Azerbaijani control in last year’s war, by “illegal Armenian armed groups in the territory of Azerbaijan, where Russian peacekeepers are temporarily stationed” – a reference to the self-styled ‘Defence Army’ of the self-proclaimed Nagorno Karabakh Republic. Later that day, the Azerbaijani MOD reported armed forces in Armenia’s Gegharkunik province opening fire on Azerbaijani positions in the Kalbajar district, with Azerbaijani forces retaliating. In response, the Armenian MOD accused its Azerbaijani counterpart of spreading misinformation “on an almost daily basis” and said that the information “does not correspond to reality” as “Armenian units, if necessary, carry out actions only to counter the enemy”.

On the night of 16-17 July, the Azerbaijani MOD reported periodic fire from positions in Armenia’s Tavush and Gegharkunik provinces onto Azerbaijani servicemen in Azerbaijan’s Kalbajar and Tovuz districts; and on the morning of 17 July, on the Yeraskh/Sadarak section of the Armenian-Nakhichevan border, with retaliation fire from the Azerbaijani side. The Armenian MOD reports that on the afternoon of 17 July, Azerbaijani positions “regularly opened fire” on Armenian troops in the Yeraskh section of the border. On the evening of 19 July, both sides report the other opening fire on their positions in the same area, with the Azerbaijani side reporting that a first lieutenant, Badalli Ramal Bahlul, was wounded. The Armenian MOD reported the wounding of the head of Armenia’s Yeraskh community, Radik Oghikyan, in what appears to be the same exchange of fire.

This morning, Toivo Klaar, the EU’s Special Representative for the South Caucasus, referred on Twitter to the “extremely worrying” developments on the border. He reiterated calls for restraint, a separation of forces and constructive engagement on border issues to prevent new casualties, offering EU assistance.

Deeply worrying developments continue on 🇦🇲-🇦🇿state border. Reiterate our call for restraint and separation of forces & constructive engagement on border issues before new casualties are registered. 🇪🇺stands ready to assist the sides.

Disputes on the Armenia-Azerbaijan border have taken place since 12 May, when Armenia accused Azerbaijani troops of crossing the border and situating themselves within Armenia’s sovereign Syunik and Gegharkunik provinces. Azerbaijan has maintained that its troops are on Azerbaijani territory. Armenia has formally requested the triggering of the Collective Security Treaty Organization’s (CSTO) collective security treaty over the situation; however, the organisation has since designated it a “border incident”, which thus, does not fall under the treaty’s provisions.