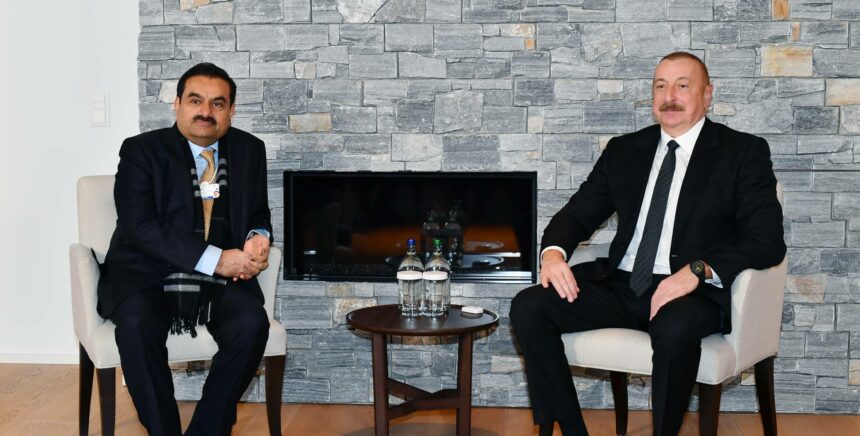 In Davos, President of the Republic of Azerbaijan Ilham Aliyev met with the Founder and Chairman of the Adani Group, Gautam Adani. Photo: president.az
Contents
Aliyev knows Adani is Modi’s manIndia outstrips Great BritainWhat is India looking for in the Caucasus? Strengthening of the Asian and Middle Eastern vector of the Azerbaijani economy

President Aliyev’s interest in Mr. Adani is not random. Adani Group, owned by the Indian multibillionaire, can be regarded as a key that opens the door to the exclusive club of India’s business elite, its transport, industry and energy complex.

The first reason is that the expansion of Adani Group’s influence, the growth of its project portfolio, as well as the syndicate’s steadily increasing capitalization are largely due to Gautam Adani’s very close ties with Indian Prime Minister Narendra Modi. Both are natives of Gujarat and have been working closely together since 2001.

Thus, entering into business contact with Gautam Adani, Baku also gets an opportunity to influence the issues of interaction between Delhi and Yerevan, which is quite important for Azerbaijan in terms of security.

Second, the potential expansion of Azerbaijani-Indian economic projects increases the importance of the Indian port of Chabahar in Iran and, accordingly, will stimulate the expansion of transport projects in Iran itself.

It should be recalled that Tehran has long relied on close economic cooperation with New Delhi, becoming India’s de facto gateway to Central Asia.

At the same time, these are just fragments of the colossal role India’s steeply rising economy plays in the global world.

According to the June 2022 IMF report, India has outstripped Great Britain to become the world’s fifth-largest economy, surpassing the $3.5 trillion mark, which is currently 3.3 percent of global GDP. If we count GDP in terms of purchasing power parity rather than in nominal monetary terms, India is not even the fifth largest economy in the world, but the third largest. In this calculation, its share of world GDP is 7.24 percent.

No one ventures to speculate what heights the economy of this country will reach as early as by 2025. But the fact is that amid the debt crisis in the United States, global investors have long and patiently built various routes to “enter” the Indian market of securities and industrial assets.

It is important to point out here that in terms of foreign investment, India is much more advantageous than the economy of its main rival, China. And then there is also the demographic potential: it is believed that India’s population has already caught up with that of China, or perhaps even exceeded it.

In short, the approach of leading analysts, who view the Indian economy the leading one in the 21st century, has long been considered fundamental. It is said that there is a popular saying among London bankers: “If you want to earn a living now, invest in the US market. If you want to secure your pension, invest in China. But if you want to provide a stable life for your children, invest in India.”

The statistics give a comprehensive picture of India as the fastest growing economy in the world. In 2021, India’s GDP grew by 9.2 percent (by comparison, the rate is 4.7 percent in Russia, 5.7 percent in the United States, and 8.1 percent in China). In 2022, India also had the largest GDP growth in the world at 6.8 percent.

Overall, India demonstrated a growing interest in the Caspian region in 2022. To some extent, this was against the backdrop of a growing number of emergency Russian-Indian cooperation projects, Russia’s attempts to circumvent Western sanctions, and Delhi’s access to cheap Russian oil.

What is India looking for in the Caucasus?

Nevertheless, India has priorities of its own in the South Caucasus region. India is one of the top five buyers of Azerbaijani oil, and the share of the Indian company ONGC in the new contract for the development of the Azeri-Chirag-Guneshli oilfields, planned to run until 2050, is 2.31%. Although the overall annual trade turnover between Azerbaijan and India so far barely exceeds one billion dollars, it is possible that we are witnessing the starting point of the forthcoming expansion.

President Ilham Aliyev’s meeting with Gautam Adani also attests to this. The Indian billionaire described to the Azerbaijani leader his Adani Group as a powerful conglomerate with vast experience in managing transport, shipping and ports in India and other regions of the world, and direct investments in this area of economy.

It was most likely about the interests of Adani Group in using the port of Alyat, which lacks an influx of external funding for large-scale expansion.

You will recall that Adani was once able to turn the berth it bought in the Iranian port of Mundra into the largest private port outside of India. In March 2019, Adani Group was the first in the country to pass the 200-million-ton mark in cargo handled in a single year. The next milestone of 400 million tons should be reached by 2025.

Apart from transportation, Adani Group is widely known for its multibillion-dollar assets in the petrochemical, mining, metallurgical, and renewable energy industries, for which Adani founded Adani Green Energy in 2015, a company dedicated exclusively to renewable energy sources. In the summer of 2020, Adani Green Energy won a government contract to develop solar energy in India, including the construction of solar power plants with a total capacity of 8 GW, as well as a project for local production of solar panels.

Interestingly, in July 2022 Adani held talks in Delhi with a government delegation from Uzbekistan to discuss the implementation of renewable energy projects, and last December he met in Astana with President of Kazakhstan Tokayev, with whom he discussed the same issue.

To complete the picture, here is another strategic priority of Adani Group: the development of air transport. In February-August 2020, that is, at the peak of the coronavirus pandemic, Gautam Adani bought a total of 74 percent of the stock of Mumbai International Airport, the second busiest airport in India. Adani Group currently controls eight airports, which account for at least 20 percent of total passenger traffic in India.

An interesting fact is that the growing ambitions of India and its leading oligarchs add up to a bigger picture if we also analyze the investments of sovereign wealth funds in the Middle East, which have spent nearly $89 billion worldwide in 2022 alone. Clearly, these are not only tools to diversify the economy, but also to gain geopolitical influence.

In other words, we now see the outlines of a fundamentally new reality take shape, where the “gravity” of big money, which attracts both technology and human resources, is shifting from the West to the regions south and east of Azerbaijan. Ilham Aliyev understands it very well, and thus he is looking for new strategic partners for Azerbaijan who are willing to accept the strategy of our country’s economic priorities.

If the Azerbaijan-India cooperation, for which the meeting between President Ilham Aliyev and the head of Adani Group Gautam Adani was another step, develops positively, it can not only strengthen the Asian and Middle East vector of the Azerbaijani economy, but also make the North-South transport corridor even more important, as well as expand the domestic agricultural and chemical-industrial base of Azerbaijan.