Baku does not believe it is possible for the French government to play any role in the normalization of Armenian-Azerbaijani relations given its current attitude, President Ilham Aliyev said, speaking at the meeting of the CIS Heads of State Council. 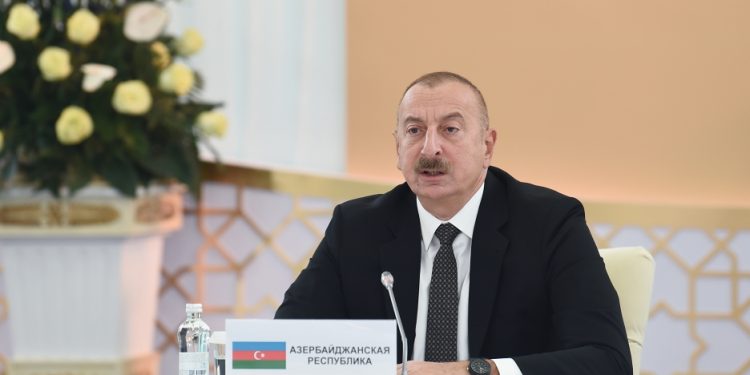 “Unfortunately, despite the fact that Azerbaijan agreed to hold a quadrilateral meeting with the participation of the President of France, although France has nothing to do with relations between Azerbaijan and Armenia—France as co-chair of the Minsk Group indeed had a mandate for a mediation mission, but since the Karabakh conflict is settled and the services of the Minsk Group are no longer needed, especially since these services are, if I may say so, more of a disservice, as I said, the Minsk Group has done nothing, not one centimeter of our land was liberated—Azerbaijan showed good will by allowing the President of France to participate in that meeting. As for the participation of the President of the European Council, as you know, several trilateral meetings have already been held in Brussels, and we have always supported in principle the efforts of the European Union to contribute to the normalization of Azerbaijani-Armenian relations. So, despite Azerbaijan’s goodwill, only a week after the meeting in Prague, the President of France made insulting, unacceptable, false and provocative statements. They are openly available in the press; anyone can read them. In these statements, he accuased Azerbaijan of starting a horrible war, thus manipulating the facts in an attempt to mislead the French public and the international community. Azerbaijan was fighting a war within its internationally recognized territory. Karabakh is recognized by the world as part of Azerbaijan. We exercised our right to self-defense and restored our territorial integrity by force. It was further stated that France will never abandon Armenia. Well, this is a matter of bilateral relations. Some biased remarks were made about the Russian Federation, namely that “Russia played the Azerbaijani game”. How politically correct it is for the president of a great country to use street language is up to the French public to decide. For our part, we strongly condemn and reject such statements, and we do not see any possibility for France to play any role in the normalization of Armenian-Azerbaijani relations given this attitude of the French government,” the President noted.

“Apart from this, the French Foreign Minister also made false anti-Azerbaijani statements, the French Senate and the lower house of the French Parliament during the Second Karabakh War passed resolutions recognizing the so-called Nagorno-Karabakh, while even Armenia never recognized it. We know that another anti-Azerbaijani resolution is being prepared in the French Senate in mid-November. Thus, unfortunately, the current French leadership, as opposed to the previous ones—and I have had a chance to communicate quite closely with President Chirac, President Sarkozy and President Hollande, and the relations were quite balanced, quite friendly, and we always perceived the activities of the previous French presidents, despite, of course, a certain factor of the Armenian diaspora in France, as balanced. However, the current French leadership has, in fact, undone all this. This is why I wanted to inform my colleagues about this situation.

Further, the Embassy of Azerbaijan in Paris was attacked twice. After the first attack, the President of France promised me in a phone conversation that measures would be taken to make sure this did not happen again. But that turned out to be not true, to put it mildly. The security guards that were posted in front of the Azerbaijani Embassy after the first act of vandalism and attempt to break into the embassy were removed. This was most likely coordinated with the Armenian side. And as soon as the guards were removed, a second attempt to break in was made, there were insulting inscriptions, there were crowds of rampaging radicals who attacked the Embassy of Azerbaijan. It is absolutely unacceptable and it is a violation of all diplomatic conventions,” the head of state said.