The United States is willing to mediate in the Karabakh issue outside of the OSCE Minsk Group as well, US Department of State spokesman Ned Price said at his daily briefing. 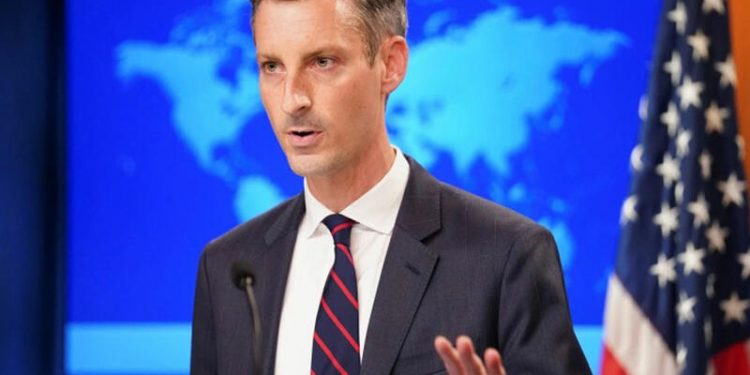 According to him, the Department of State has made it clear that the United States is ready to assist the two countries and its partners in whichever way is most effective.

“We have been a co-chair of the Minsk Group since 1994, but as we’ve demonstrated, we’re also willing to engage bilaterally with the countries to help Armenia and Azerbaijan find that long-term, comprehensive peace,” Price said. He pointed out that in these bilateral negotiations the US had been able to achieve “a degree of progress” and can continue that momentum “through continued engagements and diplomatic conversations with our Armenian, with our Azerbaijani partners in this case”.

What was that? A statement of a self-evident fact, which is that even the world’s leading powers sometimes allow themselves to play fast and loose at first only to be later forced to come to terms with the existing realities and act in accordance with the actual status quo. This is exactly what has happened now, for all to see.

Just yesterday we were surprised by the US State Department’s misinterpretation of the phone conversation between the US Secretary of State Anthony Blinken and President of Azerbaijan Ilham Aliyev. Let me remind you that our surprised was caused by the US State Department press release saying that President Ilham Aliyev and US Secretary of State Anthony Blinken had allegedly discussed, among other issues, resuming the involvement of the OSCE Minsk Group in the Armenian-Azerbaijani peace talks.

We offered a number of indisputable reasons as to why such discussions could not have taken place during the telephone conversation between Blinken and President Ilham Aliyev, which had been initiated by the US Secretary of State. In a nutshell, Azerbaijan won a great victory in the 44-day war and achieved the triumph of international law and implementation of the UN resolutions without involvement of the OSCE Minsk Group and even in spite of their position.

This is why it was ridiculous to believe that official Baku would agree to the revival of the OSCE Minsk Group, which in our country was rightly referred to not as a group, but as a troupe. Especially since President Ilham Aliyev made many specific statements on the subject, sarcastically wishing the OSCE Minsk Group diplomats a happy retirement.

This is exactly what President Ilham Aliyev has been talking about since the end of the 44-day war. And now official Yerevan is in a truly ridiculous position, as its officials continue to talk about the importance of reviving the OSCE Minsk Group. By doing so they only show that it is Armenia that has been interested all these years in the existence of this organization, which made it possible to keep up the appearance of a negotiation process amidst the continuing occupation of our lands.

But those times are in the past. Azerbaijan won the 44-day war, strengthening its position as a regional political and economic leader with the most powerful army in the South Caucasus. The US State Department acknowledges this. So does US President Joe Biden, who mentioned it more than once. The United States cannot afford to damage relations with the most comprehensively important and powerful state in the region, whose role in the world keeps growing.