Russian behavior in the south Caucasus in the wake of the Karabakh war has both a long-term and a short-term goal, a Georgian commentator who blogs under the screen name BERG…man of Tbilisi says. 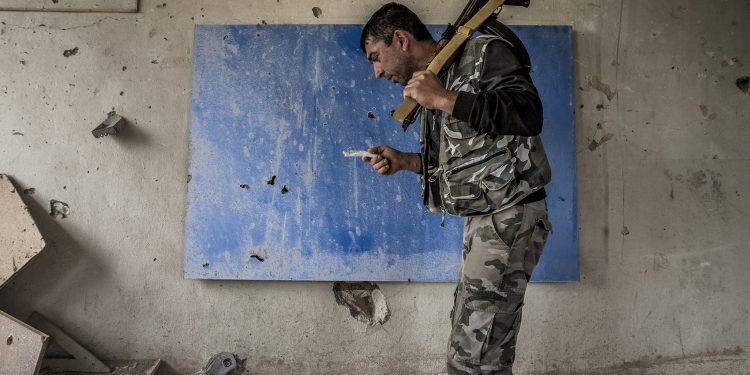 Member of the militia of Nagorno Karabakh in Talish village on 2 June 2017 inside the Talish school, shelled by Azerbaijan army on 2016. (Photo by Celestino Arce/NurPhoto via Getty Images)

Long-term, Moscow wants to expand its power in the region; short-term, it wants to ensure that Armenians won’t risk turning toward the West.

The Russian authorities are doing that by building up their forces in Armenia, in the remnant of the Armenian statelet of Artsakh, and in the Armenian lands between Azerbaijan and Nakhchivan, a space Yerevan refers to as Syunik Oblast and Baku as the historical region of Zengezur (kavkaz-uzel.eu/blogs/378/posts/49084).

But perhaps most importantly, Moscow continues to argue that the current situation is “the new status quo” and that no one must question it, something that deeply offends Azerbaijan which has very much hoped to build on its victory and easily could if the Russian Federation were not so deeply involved.

Armenians can see that and thus are likely to be less willing to turn to the West, something that could lead to a Russian pull-back, a new war, and an Azerbaijani victory because the only thing standing in the way of such a victory which this time around would involve Azerbaijan’s acquisition of territory within the borders of Armenia is Moscow.

Thus, Azerbaijan has an interest in seeing pro-Western forces come to power in Armenia in the upcoming elections because that would free Baku’s hands to act; but Moscow does not because in that event it would likely be forced to pull out some or all of its troops now on Azerbaijani territory and allow Baku to take complete control over Karabakh.

Armenians thus have a vested interest in keeping things where they are now, even though they are being forced to acknowledge that the remnants of Karabakh continue to exist only as a Russian, not Armenian protectorate, and that Armenia is a Russian client state which can exist in its current borders only in that status.

The Russian play now may work in Armenia but only at a cost of its own. By underscoring its backing for Armenia against Azerbaijan, Moscow has offended Baku and angered those in the West who recognize that the Russian forces on Azerbaijan’s territory are increasingly likely to be there without Baku’s active support.

Consequently, the Karabakh conflict will continue and possibly even intensify to the point of new violence however Moscow’s efforts to keep Armenia in its orbit work out, the Georgian blogger suggests.