Info salvo against Shusha resurrection drags church into the fight

The western press and Armenian Ministry of Foreign Affairs continue their info salvo against the post-war processes in the Karabakh. The Holy Ghazanchetsots Cathedral, also called Gazanchi Church, is now under construction, as Azerbaijan sets to restore the cathedral to its original status after it was damaged during the 44-Day Karabakh War of 2020. 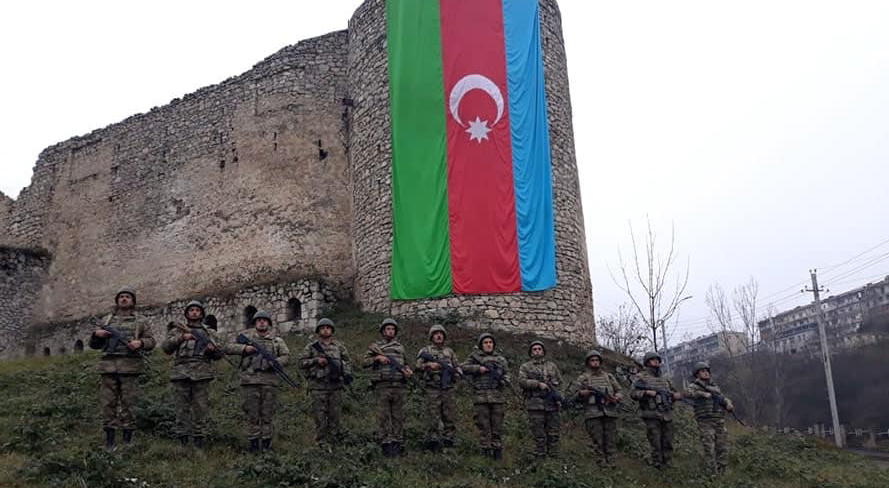 The Human Rights Watch alleged that Azerbaijan deliberately targeted the church during the conflict, while Azerbaijan maintains that damages to the church were the result of a misfire incident.

On May 4, the Armenian MFA issued a statement calling this restoration “deplorable” and that there were “already many precedents for the destruction of Armenian places of worship.” Eurasianet, in its continued weekly update of the post-conflict, alleged that Azerbaijan was altering the church, which is a rhetoric that has been published across Armenian outlets as the post-war press continues heated rhetoric.

The Azerbaijani Ministry of Foreign Affairs released a statement regarding the church on May 4.

“At present, huge reconstruction works are being carried out in these territories, including the restoration of our historical, cultural and religious heritage, which was destroyed during the decades-long Armenian occupation.

Mosques, historical monuments, mausoleums, house-museums, as well as the Gazanchi Church are being restored in the frame of large-scale reconstruction work in Shusha. We would like to note that, this reconstruction is carried out in accordance with the original architectural style in order to restore the historical image of Shusha.

APA.az press likewise interviewed first Deputy Minister of Culture Vagif Aliyev regarding the reparations. The church, which was damaged during the Karabakh conflict, had also been damaged previous times throughout history. Azerbaijan has thus expressed that they will restore the church to the appearance it had in earlier historical photographs of the region.

“What Armenians say is their own business. It can not be otherwise, historical monuments should always preserve their historical appearance,” said Deputy Minister Aliyev.

In this Religious Roundtable, Elnur Afandiyev represented Azerbaijan’s Christians, and explained the history of the split of the Armenian church from the other denominations of the region, which includes the Russian Orthodox Church, the Church of the Caucasian Albanians (Orthodox Udins), Georgian Christians, Baptists and others. Christianity is one of two large religious minorities in Azerbaijan, the other being Orthodox Jews.

Other outlets dictated that the historical restoration of the church was controversial in Armenia because Azerbaijan has elected to restore the church to match an earlier Udi Christian style. AzVision Azerbaijan interviewed Doctor of Philosophy in History Adalat Mustafayev, who told reporters that the Gazanchi church’s foundations were laid in 1806 and that this would have been a time when the church grounds were still part of the Karabakh Khanate. He also noted that there was likely no Christian temple in Shusha itself until after the Tsarist Russian occupation of the territory. This was based on an analysis of the region during the Panakhali Khan era.

The Karabakh khanate fell under a treaty signed in 1805. Historical review of the region must cut through a complex revision of historical facts that Mustafayev states were confounded during the Tsarist era, during the Soviet era, and continuing to the present inquiry.

There is an interdenominational conflict between the Armenian, Albanian and Russian sects of the Eastern Orthodox Church that would give grounds for a conflict over the restoration of the church’s appearance at different periods of history. Armenia argues that Azerbaijan is deadset on the “Albanization” of territories within the Karabakh. The Armenian Christian church and the Udi Christian sects split during the 19th century. Doctrinal differences between the Armenian and Russian Orthodox church would likewise be grounds for controversy regarding the restoration of an Armenian church to its appearance under another Orthodox sect…

Mustafayev cited the use of historical origins disinformation by the Armenian political actors of the war.

This, coupled with the info salvo against the church’s restoration, adds strain to the process of restoring the church and the overall historical image of Shusha before the war. Aydin Kerimov, President Aliyev’s Special Envoy to Shusha restoration, wrote in a Haqqin.az article, which was recirculated in English as an Aze.media article, that the responsibility for the church restoration in Shusha would fall to Azerbaijani Christians.

Kerimov noted that the church was part of a massive “resurrection” campaign for a series of intellectual and cultural sites in Shusha that had fallen into ruin during the conflict. Kerimov quoted Armenian Prime Minister Pashinyan stating that the Armenian occupation forces in Shusha had turned the city into a crumbling ruin overgrown with weeds. Kerimov questioned the info salvo against the Shusha restoration, and wondered why, if Pashinyan agreed that the Armenian forces had self-sabotaged by leaving the city in ruins, why would Armenia be vocal against the process of restoration.

Kerimov stated that, as for the Gazanchi church, Armenian forces had used it as a shelter for their soldiers during the war and accused Azerbaijan of deliberately damaging it during the conflict. Kerimov stated that now Armenia’s rhetoric has turned to alert the “whole world” that Azerbaijan is attempting to turn the church into a mosque.

Kerimov stated that Azerbaijani Christians were set to restore the church on the grounds of a shared Christian history, stating that there were Christian relics in the region where Karabakh khans had prayed “since the city was built.” He also cited that the ancient Albanian tribes of the area, forcibly converted to Georgianism, were able to build their parish church. Kerimov stated that now, the Orthodox Udins were those left to decide if the restored church will be Orthodox or if another sect will fall to Azerbaijan’s Christian Udins and will be “open to all Christians.”