An official reception and a concert program were organized in Bern, Switzerland, on November 16 of this year to celebrate Azerbaijani national holidays: Victory Day, National Flag Day, Constitution Day, and National Revival Day. 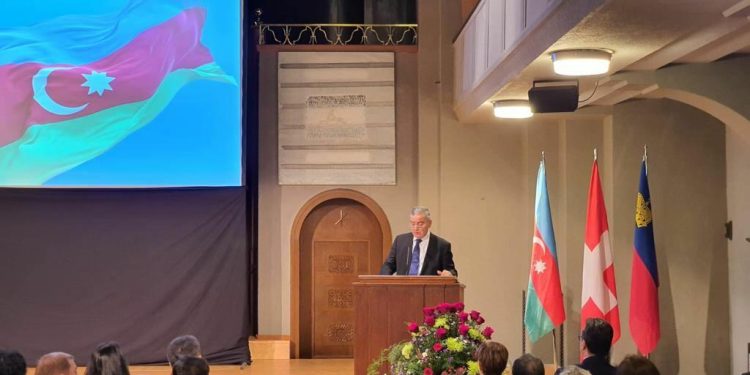 According to the Embassy of the Republic of Azerbaijan to the Swiss Confederation, Ambassador Fuad Isgandarov welcomed the guests at the official opening of the event. He spoke in detail about the historical significance of these holidays of the Republic of Azerbaijan, about the restoration and reconstruction work being carried out in the liberated territories after the Victory, and touched upon the progress of the peace talks. The ambassador thanked the Swiss government for hosting direct talks between the sides, without the involvement of any foreign mediators, for the first time in history on October 2, and condemned the efforts of some forces trying to manufacture artificial obstacles for the peace process. Mr. Isgandarov stressed that Azerbaijan’s commitment to peace and reconstruction processes facilitates a stable and secure development of the South Caucasus, making the region a space that connects Europe and Asia with strong threads.

After the official part, the event continued with a concert program.

Trio Areal, a group of Swiss musicians, led by the Azerbaijani violinist Jamilya Garayusifli, a Master’s student at the Zurich University of the Arts, performed classical works by world-famous Azerbaijani and foreign composers.

The event was attended by high-ranking Swiss officials, including Erwin Bollinger, Swiss Co-Chair of the Azerbaijan-Swiss Joint Commission for Trade and Economic Cooperation, Anna Ifkovits, Head of the Eurasia Division at the Swiss Federal Department of Foreign Affairs, representatives of the diplomatic corps accredited in Switzerland, representatives of the Azerbaijani diaspora, Swiss public, and members of the press.

The performances, the concert program, and the official reception impressed hundreds of participants and spectators, and garnered great resonance in Swiss society.

The event ended with a banquet for the guests.