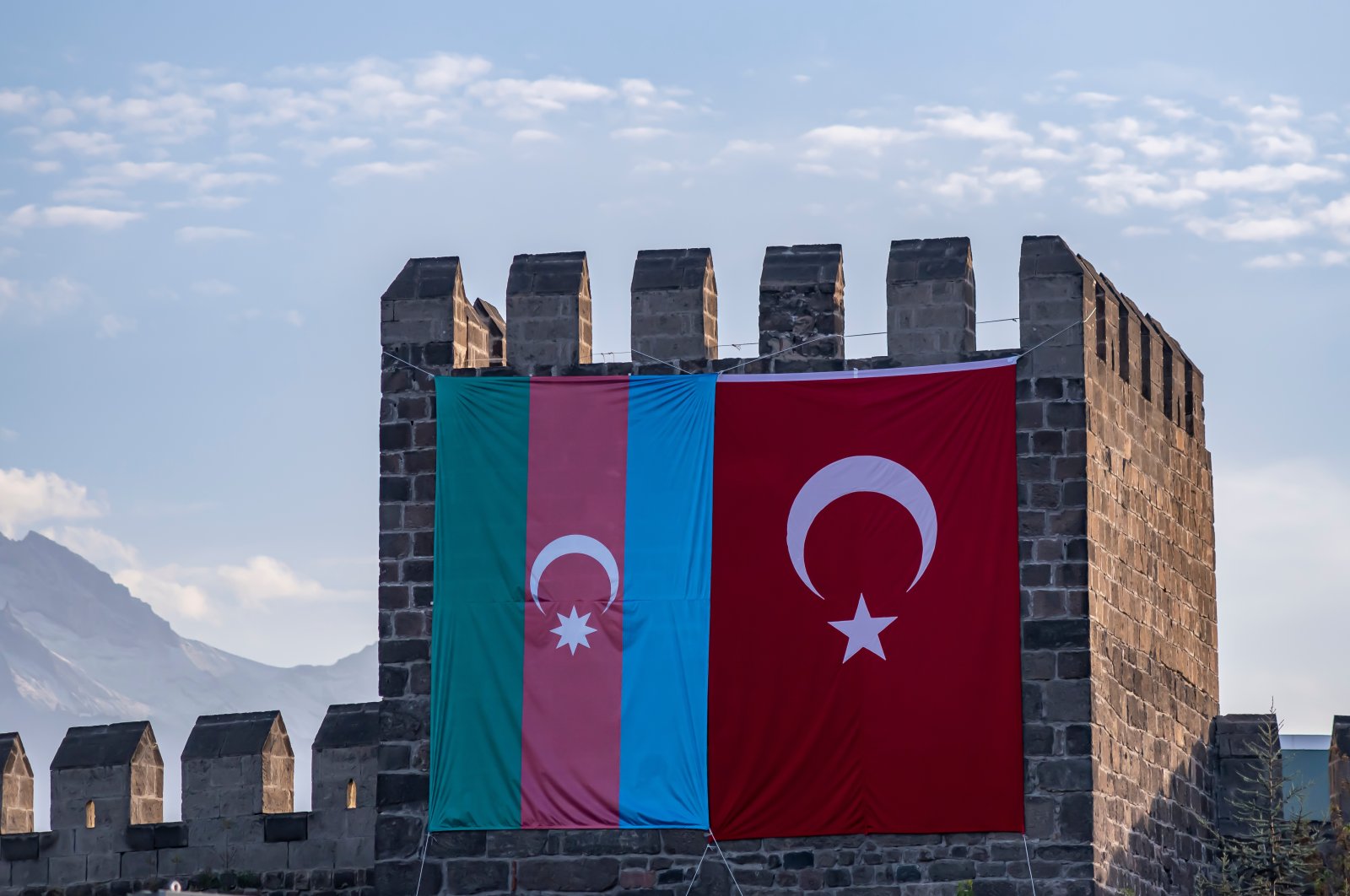 Azerbaijani and Turkish flags hang side by side on the Kayseri castle, Kayseri, Turkey. (Shutterstock Photo)

Turkey and Azerbaijan have been influential in thwarting threats and have been cooperating in a wide range of areas thanks to their historical and brotherly ties, Baku’s envoy to Turkey Rashad Mammadov said Saturday.

Speaking at the Ankara-based Strategic Thinking Institute (SDE), a think tank, Mammadov underlined that the Turkey-Azerbaijan brotherhood constitutes a model.

Mammadov recalled that even though Azerbaijan remained as part of the Soviet Union for 70 years, “we still did not lose our identity, customs, traditions, values and relations.”

Expressing that his country’s relations with Turkey are more than just normal interstate relations, Mammadov mentioned the projects that Azerbaijan has accomplished together with Turkey, and shared as examples the Baku-Tbilisi-Ceyhan Oil Pipeline and the Baku-Tbilisi-Kars Railway project.

Pointing to the importance of Turkey in realizing these projects, Mammadov indicated that these not only serve the needs of Baku and Ankara but everyone.

“There will be no Azerbaijan without Turkey, and Turkey will be weak without Azerbaijan,” he said.

Noting that Azerbaijan has invested $19.5 billion in the energy sector alone in Turkey, Mammadov said, “Who sees the benefits of the defense industry of Turkey’s Defense Ministry? We see it. The Azerbaijani army was founded on the Turkish model.”

“After three decades, today, there is a much stronger Turkey and much stronger Azerbaijan, whose fraternity and close cooperation is also the assurance for peace and stability in their common region,” it added.

Relations reached new highs with the signing of the Shusha Declaration last year, which was ratified to enhance cooperation and promote stability in the region in the wake of the Nagorno-Karabakh conflict.

The Shusha Declaration focuses on defense cooperation, promoting stability and prosperity in the region, and establishing new transportation routes.

It came after clashes erupted in September 2020 between the former Soviet republics of Armenia and Azerbaijan when the Armenian Army launched attacks on Azerbaijani civilians and forces and violated several humanitarian cease-fire agreements. Turkey staunchly supported Azerbaijan in its fight.

During the 44-day conflict, which ended in a truce on Nov. 10, 2020, Azerbaijan liberated several cities and nearly 300 settlements and villages in Nagorno-Karabakh from a nearly three-decade occupation.

The two countries also closely cooperate within the scope of the Organization of Turkic States as well as in establishing the 3+3 Caucasus Platform, which envisages further integration and cooperation in the region.

Ankara has made frequent calls for a six-nation platform comprised of Turkey, Russia, Iran, Azerbaijan, Georgia and Armenia for permanent peace, stability and cooperation in the region, saying it would be a win-win initiative for all regional actors in the Caucasus.

Turkey believes that permanent peace is possible through mutual security-based cooperation among the states and people of the South Caucasus region.

Russia similarly hailed efforts with Turkey in easing tensions in the South Caucasus that were mainly rooted in tensions between Baku and Yerevan.

“We immediately saw a very good unifying potential in this initiative and immediately … we advocated that our Georgian neighbors should also be involved in this process, proceeding from the fact that the more opportunities for communication, the better for solving the remaining problems,” said Lavrov, speaking at an annual press conference evaluating the foreign policy developments of the past year.

Georgia did not attend the first 3+3 meeting in Moscow and announced that it will also not participate in the next round expected to be held in Turkey.

Underlining that this format would help develop the entire region, Lavrov said: “We support these efforts, we actively participate in them, they contribute to the normalization of the situation in the South Caucasus and help create conditions for the remaining political problems to be solved much more actively and fruitfully through, among other things, economic cooperation between the three countries of the South Caucasus and their three large neighbors – Russia, Turkey and Iran.”