According to the 2020 report on Human Rights by the US Department of State, there is the rise of anti-Semitism in Armenia. 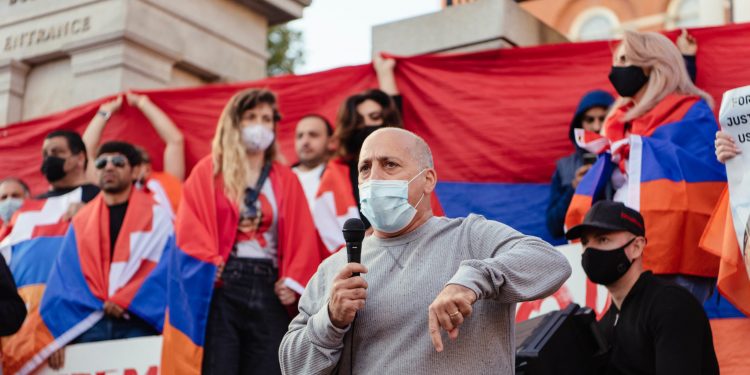 The report on Armenia published on the official website of the US Department of State says that observers estimated the country’s Jewish population at between 500 and 1,000 persons.

The Jewish community in Armenia has also confirmed the rise of anti-Semitism cases in this country.

Members of Jewish community informed that the last war of the fall of 2020 with Azerbaijan contributed to the rise of anti-Semitism among Armenians, who largely attributed this trend to the Azerbaijani use of Israeli weapons.

According to them, the number of anti-Semitic posts increased in social media.

The Jewish and Armenian sides of the Yerevan’s Joint Tragedies Memorial were vandalized with paint on October 14 and burned on October 22.

Speaking to Eurasia Diary, Mikhail Finkel, Israeli expert on international relations, commented on the rise of anti-Semitism in Armenia.

Finkel initially said that the situation with anti-Semitism in Armenia is not a new thing.

According to him, there were anti-Semitism cases in the history of Armenia.

“Armenian history, if it is traced back, it has always been anti-Semitic from Byzantine Empire to the latest developments. In particular, this is so due to the position of the Armenian Church and their doctrines,” Finkel said.

“Today, it is evident for everyone that Israel stood by Azerbaijan. And it is a strong supporter of Azerbaijan and its ally. Anti-Semitism in Armenia has drastically increased in Armenia,” he added.

Moreover, an Israeli expert noted, a strong Jewish community does not even exist in Armenia. He also noted, that he considers Armenia to be a dangerous place for the Jews.

“The Jewish community in Armenia is extremely small. Only a few hundred people remained there.  Most of them are people of mixed ethnic descent. They are half Armenian, half Jewish. We cannot talk about the really existing flourishing Jewish community in Armenia. It is not there. But still these individuals are connected to the Jewish people and they have to be taken care of.  I advise all of them to leave Armenia as soon as possible and come to Israel.Our country welcomes them. Israel is motherland for all Jews. There is no future in Armenia for Jews. It becomes a more dangerous place for them,” he stressed.

In addition, Finkel said that the main reason for increase in anti-Semitism in Armenia is connected to the glorious victory of Azerbaijan in the Second Karabakh War.

The Armenians claim that the victory in this war happened only due to the Azerbaijani use of the high-tech Israeli drones, missiles and other technologies. But this claim is patently false, because Azerbaijan used weapons from many other countries of the world. Armenia blames the Jews for its own failures, its own weak army and its own disaster,” he said.

In conclusion, an Israeli expert expressed his special words of gratitude to the President Ilham Aliyev for the peaceful life of Jewish community in Azerbaijan.