Member nations discuss cooperation on trade and fighting Covid-19 but avoid talking about Chinese region that has been the focus of international headlines in recent weeks. Countries share China’s views on fighting terrorism in Central Asia, experts say. 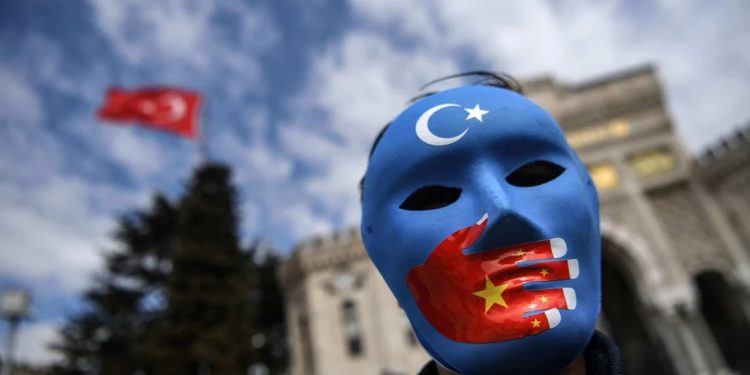 A demonstrator wearing a mask painted with the colours of the flag of East Turkestan takes part in a protest in Istanbul on Thursday. Photo: AFP

It may have been the subject of news headlines around the world in recent weeks, but Xinjiang was not on the agenda for an informal meeting of the Turkic Council on Wednesday.

The Cooperation Council of Turkic-speaking States, as the group is officially known, consists of Azerbaijan, Kazakhstan, Kyrgyzstan, Turkey and Uzbekistan.

Opening the meeting, Kazakh President Kassym-Jomart Tokayev said the council’s goal was to “transform the Turkic world into one of the most important economic, cultural and humanitarian regions of the twenty-first century”.

He also called for greater cooperation on trade and education, and for member states to share their experiences of fighting Covid-19.

While the summit did not mention China, Zhang Ning, an expert on Central Asia studies at the Chinese Academy of Social Sciences (CASS), said the Turkic states were keen to boost economic cooperation with China in the fields of energy, transport and investment funds.

“Kyrgyzstan clearly proposed [at the meeting] to support the construction of the China-Kyrgyzstan-Ukraine railway,” he said.

Yin Gang, a research fellow with the Institute of West Asian and African Studies at the CASS, said Turkic Council member nations also shared Beijing’s views on fighting terrorism in the region.

“Turkic states support China’s anti-terrorism efforts and attach importance to political and economic relations with China … [so] it is not surprising that they did not mention the issues regarding Xinjiang,” he said.

“The more determined China is to fight terrorism, the better it will be for the national security of Central Asia.”

The Turkic states had also sought a balanced approach with Moscow and Beijing, especially with regards to economic cooperation under China’s Belt and Road Initiative, he said. The infrastructure development plan, championed by Chinese President Xi Jinping, has helped China to expand its economic and political presence in Central Asia.

China is Kazakhstan’s largest trading partner, and the second-largest for Uzbekistan and  Kyrgyzstan. Turkey is a strong supporter of the belt and road plan.

“Turkey tends not to offend China although they once wanted to be the protectors of Xinjiang Uygurs,” Yin said.

Turkey was once a vocal supporter of China’s Uygurs but has shifted its position in recent years.

During the recent visit of Chinese Foreign Minister Wang Yi to Turkey, he sought to win support for Beijing’s policies on Xinjiang, as hundreds of Uygurs protested on the streets of Ankara.

Kemal Kirisci, a senior fellow at the Washington-based Brookings Institution, said the Turkish government hoped that investments, trade and credits with China could help salvage its economy, and had bought Covid-19 vaccines from China, creating an additional dependence.

Li Sheng, an expert on Xinjiang at the CASS said the Turkic states had historical links to Xinjiang so they understood the issues in the region and Beijing’s policies on it.

“It is a good thing [that they didn’t mention Xinjiang] … as they understand Xinjiang’s problems, understand the history of the Turkic language family and what happened there,” he said.

“There are commonalities, including the development and stability problems faced, including anti-separatism and the danger of extreme religion. Separatist activities are also a danger to them.”